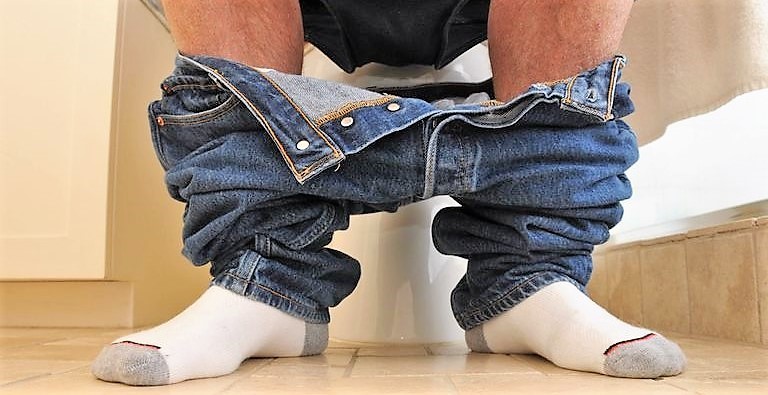 I am the least likely person to be writing about diarrhea. Just typing the word is mortifying. I needed spell check just to get it right. It’s the double “r” that trips me up.

My discomfort discussing anything butt-related is well documented, but this is important. Here’s why.

One in five people living with HIV suffers from chronic diarrhea. That’s too many, and I happen to be one of them. Many of us figure that if the meds are working and we’re healthy, then gastrointestinal problems simply come with the territory. Remember the HIV drug Kaletra? What a nightmare. When my doctor prescribed it, he helpfully suggested I carry a plastic baggie and an extra pair of underwear with me at all times. Horrifyingly, he was absolutely right.

I managed to find a better med for me, but it’s the ongoing, not-quite-emergency-level diarrhea that has been plaguing me in recent months. And, if it wasn’t for the musical comedy web series “Merce” (and its hilarious production number about our reluctance to discuss diarrhea with our physician, below), I wouldn’t have the nerve to bring this up at all.

Season two of “Merce” has been funded in part by Napo Pharmaceuticals, the makers of Mytesi, a new drug approved by the FDA for the treatment of diarrhea among people living with HIV. I don’t do commercial endorsements on my blog, at least not for products I haven’t tried, but the topic attracted me because I know it’s something I need to address.

“If you don’t identify a problem, how can you find a solution?” asked Lisa Conte, CEO of Napo, during our phone interview. Lisa has no problem saying diarrhea. I’ve never heard the word spoken so many times in one sitting. Ahem.

In the early years of HIV/AIDS, Lisa explained, side effects like diarrhea were pushed aside in a battle for life and death. And even now, having healthy t-cells or an undetectable viral load is the grand goal of clinical care. It makes patients like me who suffer from diarrhea feel embarrassed to mention it, if not feel downright ungrateful.

Diarrhea also means losing electrolytes and getting dehydrated. “You’re also not absorbing nutrients or your medications properly,” Lisa warned. That last fact made an impact on me. We worked too hard to advocate for effective meds, and for people like me to have access to them, then for them to simply get flushed down the drain.

Before I knew it, I was confessing to Lisa about my own tummy troubles. I was even saying the word. “I have diarrhea, like, all the time!” I confided. I wonder if this sort of outburst happens to her a lot. Does she get asked back to cocktail parties?

Unfortunately, if you want to address your diarrhea with your doctor, you will probably have to be the one to bring it up.

“Addressing diarrhea is still mostly initiated by the patient,” reported Dr. Ronald Grossman, an infectious disease doctor in private practice in New York City. Dr. Grossman has been at this since the HIV crisis began, and he’s frustrated with how many doctors won’t bring up diarrhea.

“Some young doctors are so sharp about the latest drugs,” Dr. Grossman told me, “but this topic almost never comes up. There’s a whole lot of physician education that needs to go on here. After a patient talk I did recently, a young well-built guy came up to tell me he can’t hardly leave the house. He can’t predict his bowel movements. He didn’t have knowledge about a drug like Mytesi.”

Yes, Dr. Grossman is a fan and spokesperson for Mytesi, and damn if I didn’t blather on with Dr. Grossman about my own gastrointestinal maladies, and then promise him I would make a doctor appointment. And I did just that.

It actually felt great to commit to a doctor appointment just to discuss this. I even said the word diarrhea without lowering my voice. Much.

My doctor did exactly what Dr. Grossman suggested be done. She handed me a kit with two vials to take home to collect samples, so they could be tested in order to rule out any other conditions that might be causing my diarrhea.

Just this morning, after a week of putting it off, I took care of the sample vials. It was as unpleasant as I had imagined. But I’m a big boy, a grown man in fact, and these are the things we do for our health. Yes, I was grossed out. But now I feel triumphant, dammit! I return the vials to the clinic today. Wish me luck.

Should everything check out normally – I will keep you updated – then I’m asking my doctor for the Mytesi and I will let you know if it works. What I have learned about it, I like. Mytesi is the first natural botanical oral drug approved by the FDA. Napo could have simply sold it at a health-food store or GNC, but they opted for the much more stringent FDA approval process. Mytesi also doesn’t dry you out like over-the-counter diarrhea pills. It works when you need it, “normalizing” the gut, according to Napo.

And hey, my doctor might think I’m lactose intolerant or want to go in some other direction. I’m teachable and I’m willing. But this will end with my having a healthier gut if I have anything to do with it.

So there. That’s my diarrhea story. If you’re having similar problems, please don’t be afraid to bring it up very directly with your clinician. You’ll probably have to do the vial thing before anything else. Deal with it.

And, I want to thank the creators of Merce for being more courageous about this topic than I have been. They are still raising funds to complete Season Two. If I get my “stomach problems” in order, they’re getting a big fat donation of 20 bucks from me.

Thanks for reading, my friends. And please, be well. That includes your pooping.