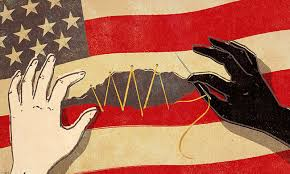 I cancelled a Zoom meeting this afternoon. It was a 60-minute commitment that did not require me to wear pants or deodorant, or do anything other than clicking an application on my computer, and yet I woke up this morning and immediately knew I simply could not. Even before I regretted checking the latest round of “White America Debating Racism Today” on various social media platforms, I was already trying to sidestep the wall I had just slammed into face-first upon awaking.

It is always exhausting being a minority in this country. Something about the whole stealing the continent from one race, and then exploiting other races to construct the infrastructure of the entire country has led to this. Maybe it has something to do with forcing folks to work based on the color of their skin. Possibly, it was assigning a litany of negative stereotypes to them, and then engraining it into the fabric of every facet of our society. Maybe it is pitting minorities against one another. Could have been using one minority to justify the centuries of abuse on another. However, instead of actually listening to black voices, and hearing their words, we can all climb onto Facebook and scream about a looted Target and point fingers at each other. As though that is going to enact any kind of meaningful change.

I posted two days ago on my Facebook about Black America being tired. Because as a black person living in a mostly white, mostly rural segment of this country, I am exhausted. I have the benefit, and it is absolutely a benefit and privilege; of being one of those light-skinned folks that white people refer to as “not that black,” or “not dark.” I have had people speak to me in a way that you know if they could smell the melanin, they would have not dared to utter. In the past few days, I have typed “Emmett Till” and “John Brown” as retorts to arguments about how to be a white ally versus how to be part of the problem so much, that my phone auto-predicts them as I type. In an attempt to unearth a silver lining amidst this literal ocean of garbage, I hope Amy Cooper is able to see the blatantly obvious problematic nature of her call to 911 now. At least that is one less white person to de-brainwash.

Because that is the real crux of “the issue.” We cannot fix the problems until we understand how deep they run in our society. We cannot come together as a nation, until we are able to wash away the layers of systemic oppression. The idea that privilege is a monetary concept and not something as basic and awful that by 12 years of age, my brother had a conversation with my parents involving how the world viewed him based on his appearance. A conversation and reality that I will never have to bear the full weight of, because I am ethnically ambiguous in appearance, while he is the archetype of the suspect that every white person committing a crime and seeking to deflect blame describes.

A year ago, I sat in a room with trans and non-binary folks from across both Beltways, and instead of just discussing trans-specific issues, we primarily discussed racial tensions. Because we understand that systemic racism in America is the catalyst that lends itself to every other problem within our country as a whole. Did it help that the majority of folks in that room were of races other than white? Probably, and to deny that influence is an insult to each one of those folks. Because just like there is a subset of gay and lesbian Americans that believe that the TQ+ in our acronym is taking things “too far,” there are absolutely trans and non-binary folks who are racist, or at least have a lot more unpacking to do about the subject than they are wanting to admit. Being a minority does not absolve one from living with prejudice, case in point: Milo Yiannopoulos.

Milo also represents a completely separate myth that perpetuates the racist overtones of our society. He is married to a black man. The idea that fetishizing, or even simply finding physical attractions to black folks means that people cannot have prejudices of their own is as easy to debunk with the simple fact that lots of slave owners found us attractive then too. Problem was, they did not see us as people deserving of the same liberties as they enjoyed then, and their descendants have not made much progress today. Side note, if the arguments for why you are the exception to the rest of white folks include your favorite musical artists, your one co-worker you pump your fist up for as they walk by, or the token friend of your kid that you use in every argument, sit down. Sit all the way down, and throw away whatever fruit-filled potato salad you have in your fridge. As you clean out that container, think about the symbolism of that as you reflect on yourself.

The state of America has taken centuries to get here, and it is not going to be unpacked and fixed without undoing each layer of that racist foundation. The majority of our revered founding fathers kept and slept with more slaves than they could count. Many states textbooks still refer to the Civil War, as a war over states’ rights, while ignoring that the right they were making a stand over was the one that let them own folks. Black History Month curriculums consist of learning about George Washington Carver and the more docile MLK quotes. Colorblind attitudes and reductionist outlooks only exasperate these wounds. Instead of White America screaming overtop each other, they need to listen. Listening leads to learning, and learning leads to healing. And only when we get to healing, will we truly have made progress.