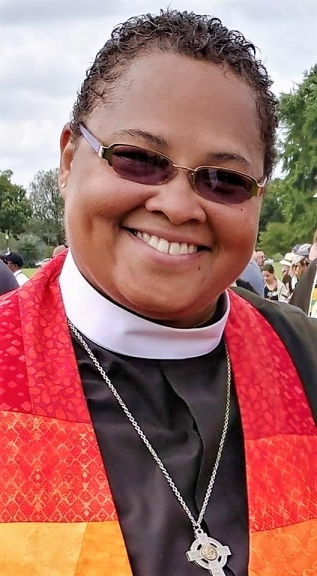 On September 23rd, Rev. Angela Teresa Jones-Ramirez will be officially installed at Vision of Hope Metropolitan Community Church, where she began serving as their settled senior pastor on May 17th.

Jones-Ramirez is a proud Baltimore native, who excelled in both academics and athletics at Baltimore City College Senior High School where she graduated. She began her undergraduate work at Hampton Institute, now Hampton University, and completed her bachelors of science degree in sports medicine at Towson State University. She pursued her first master’s degree in the same subject at Indiana State University in Terre Haute, followed by doctoral studies in health care administration at Nova South Eastern University. Her studies were postponed and not completed due to the untimely death of her baby brother, Barry C. Jones.

Jones-Ramirez is known to many in Baltimore from her many years of active service as a lay minister at the Metropolitan Community Church of Baltimore, where she was responsible variously for outreach, missions, worship, performing arts, fellowship, hospitality, and stewardship. She also served as co-chair of the board of trustees. During that service, she was encouraged by Rev. R. David Smith to attend the Apostolic Training and Sending Center (ACTS) at Glory Tabernacle in Long Beach, California, where she graduated in 2008.

Continuing to grow her ministry, acknowledging and accepting her call, Angela enrolled in the Lancaster Theological Seminary, graduating in 2015 with a master’s of divinity.

At her current church, Vision of Hope Metropolitan Community Church, Jones-Ramirez shares and preaches radical inclusivity of all of God’s children and believes in changing lives through transformational love and service. She serves those on the margins and advocates for those who appear to have no voice. Services begin at 10 am each Sunday, and Bible studies are on Tuesday nights at 7 pm.

The installation service will begin at 1 pm and be held at Vision of Hope MCC, located in Mountville, Pennsylvania. There will be a reception immediately following.

The church requests that all clergy wishing to participate and process in the service please vest for the occasion. The liturgical color for the day is red.