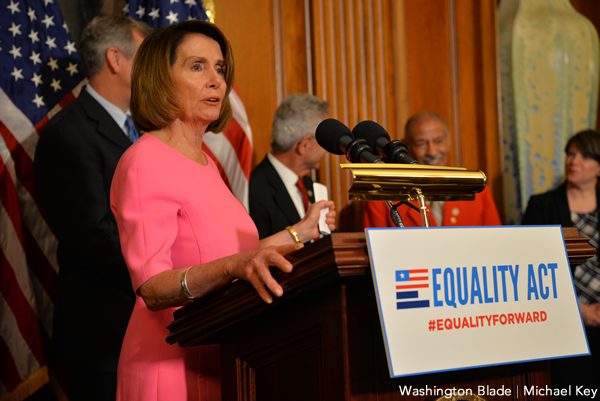 Washington – The House Judiciary Committee approved the Equality Act on May 1st. The measure would amend federal civil rights laws to include protections for sexual orientation and gender identity. When she became speaker in January, Nancy Pelosi said that passing the legislation would be one of her signature goals, and the measure went through the Judiciary Committee on a straight party-line vote, 22 to 10. The bill is now in line for a floor vote.

The Equality Act prohibits discrimination based on sex, sexual orientation, and gender identity in areas including public accommodations and facilities, education, federal funding, employment, housing, credit, and the jury system. It also defines and includes sex, sexual orientation, and gender identity among the prohibited categories of discrimination or segregation. “The ability to have a job, to receive medical care, or to rent a home should not depend on who someone is or where they live. And it certainly should not depend on who they love,” committee chairman Jerrold Nadler (D-NY) said May 1st. The bill, introduced by Rep. David Cicilline (D-RI), has more than 230 Democratic co-sponsors, including all the Democratic House members from Washington state.

The Business Coalition for the Equality Act, which is made up of about 200 companies, teamed up with the HRC to push the bill through Congress. On the other side, the Heritage Foundation claims that the Equality Act would force employers and workers to conform to new sexual norms and force hospitals and insurers to provide and pay for therapy against any moral or medical objections. They also said it would harm families by normalizing hormonal and surgical interventions for gender-dysphoric children, lead to the erasure of women by dismantling sex-specific facilities and sports, and affect faith-based charities. Rep. Doug Collins (R-GA), the committee’s ranking member, said the bill “marginalizes almost an endless spectrum of Americans” – presumably meaning right-wing Christians – and is “legislation based in political theory, not scientific reality.” (Seattle Gay News – Mike Andrew at Sgn.org/sgnnews47_18/page1.cfm)