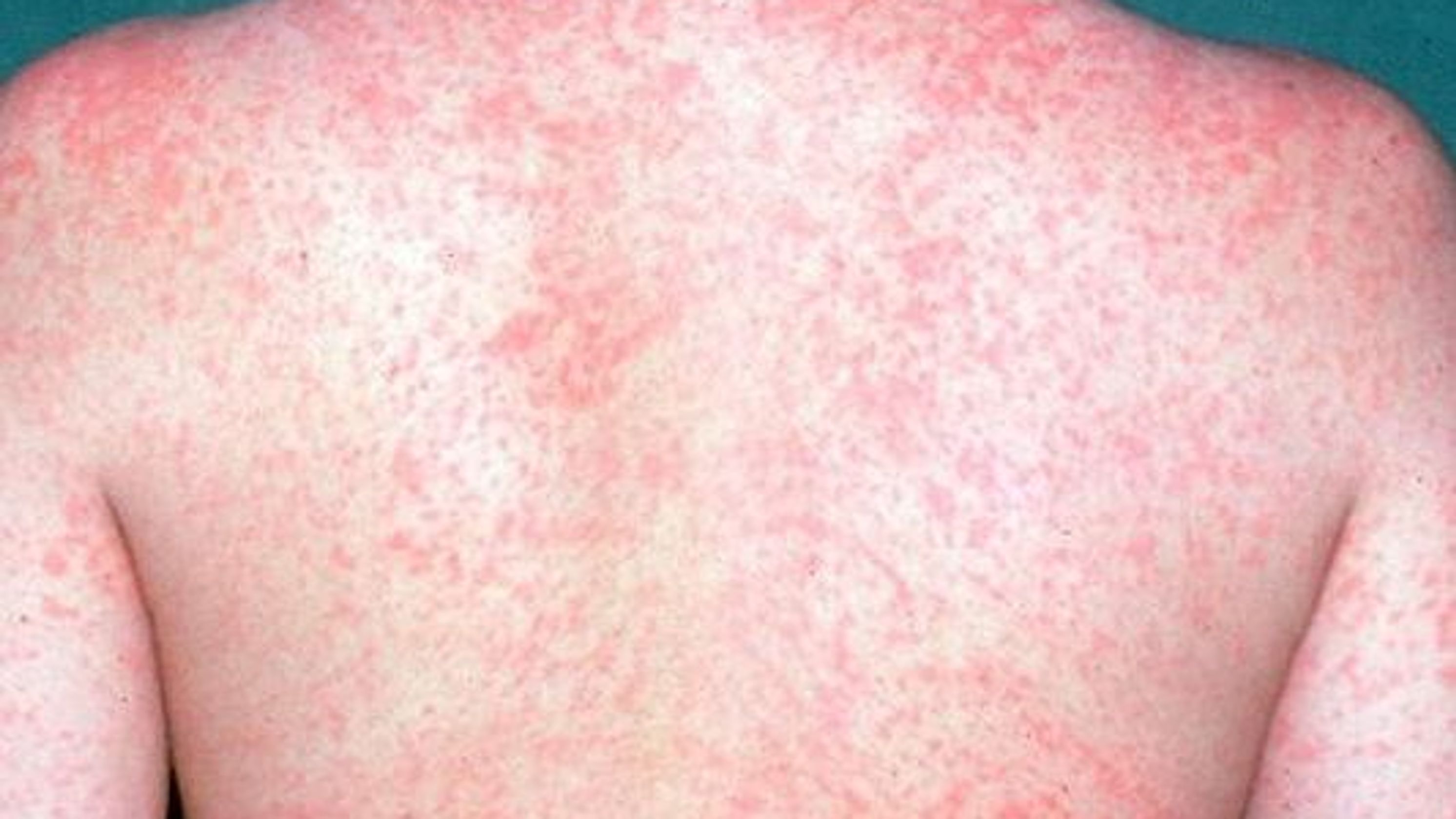 There is currently a measles epidemic in the United States, and another, much larger one in Madagascar. In the US, there have been about 660 cases this year, mostly in young children in Washington state, Illinois, Texas, and New York. No deaths from measles have been reported in the US so far this year. Measles can develop into pneumonia and can lead to brain damage (from swelling of the brain) and blindness.

Measles is transmitted by tiny droplets of fluid in the air. Droplets are produced when a person who is infected with measles sneezes or coughs. The droplets are then breathed in by another person, who becomes infected. Measles is the most infectious disease known to man. It is more infectious than the flu (influenza), tuberculosis, or plague. Measles droplets can stay suspended in the air, still able to cause infection, for two hours after an infected person coughs or sneezes and after the infected person has left the room. A person walking through the room within two hours has a 90% chance of becoming infected.

According to the World Health Organization (WHO), the measles vaccine has prevented 20 MILLION deaths since the year 2000. Measles was eliminated in the United States in 2000. After 2000, there were no more domestically transmitted cases of measles until 2017. The few cases of measles that did occur happened because a person who became infected in another country brought the infection to the US. This changed in 2017, when domestically transmitted measles reappeared because of a drop-in vaccination rates.

The measles vaccine is one of the most effective vaccines. It protects 97% of children who receive two doses, usually given at ages 15 months and 24 months. One dose does not produce lasting immunity; two doses are necessary. About one in 20 children who receive two doses do not become immune. The non-immune children are also protected by vaccination: if all the other children are immune and will not develop measles, they will not transmit measles to those who are not immune. This overall protection of a group by immunization is called “herd immunity,” meaning that if most members of a group of people become immune, even those who are not immune are protected. Herd immunity may lead some parents to think, “I don’t have to have my child vaccinated because if all the other children are vaccinated, my child won’t be exposed to measles and won’t get the disease.” Unfortunately, this would only be true if the parents of no more than one child in every group of 30 children decided not to have their child vaccinated. When immunization rates drop below 85%, herd immunity is no longer as effective and outbreaks start to occur, like the one we are seeing now in the US.

Why do parents refuse to have their children vaccinated for measles when the vaccine is available free (at the Health Department for uninsured children), is effective and has few and minor side effects? This started with a fraudulent paper published in 1998 by a “researcher” who claimed to have found a connection between the measles mumps and rubella (MMR) vaccine and autism. Many other researchers then looked for a connection between vaccination and autism but could not find any. Years later, the author of the 1998 article admitted that the data in his article was faked. He lost his license to practice medicine because of his unethical behavior, but the damage was already done. Today, many people still refer to that one article as the basis for holding on to the false belief that the MMR vaccine can cause autism. Because so many parents have chosen not to vaccinate their children against measles, there is now a recurrence of this serious and sometimes deadly, but completely preventable, childhood illness in the richest country in the world.

Madagascar is a large island off the west coast of Africa, famous for its lemurs and many other animals and plants that are not found anywhere else in the world. Madagascar is one of the poorest countries in the world. Many families survive on less than $2 a day. In Madagascar, the first dose of MMR vaccine is available for free. Until very recently, there was a charge of $15 for the second dose. In part because so many families cannot afford $15, most children who have had the first dose have not received the second dose. Only about 58% of Malagasy children have been vaccinated even once. This is not because Malagasy parents don’t want their children to be vaccinated or are refusing vaccination. Many parents walk miles carrying their child to try to get the child vaccinated. They often are unsuccessful. The clinic may have run out of vaccine, or the clinic has closed down, or the vaccine, which must be refrigerated, has spoiled due to the frequent interruptions of electricity.

In Madagascar, the current outbreak started in October 2018. There have been over 66,000 cases of measles since then. More than 1,000 people – mostly children under five years old – have died of measles in the past six months. Now that parents have seen their own children and their neighbors’ children dying from measles, they want their children vaccinated more than ever. They see around them that vaccinated children are staying healthy and unvaccinated children are sick. Emergency supplies of vaccine are coming from the World Health Organization (WHO), but even if both doses of vaccine are available free, the barriers of poor or no roads, lack of refrigeration, lack of transportation, and an inadequate communication network will continue to make it difficult or impossible for many children to be vaccinated.