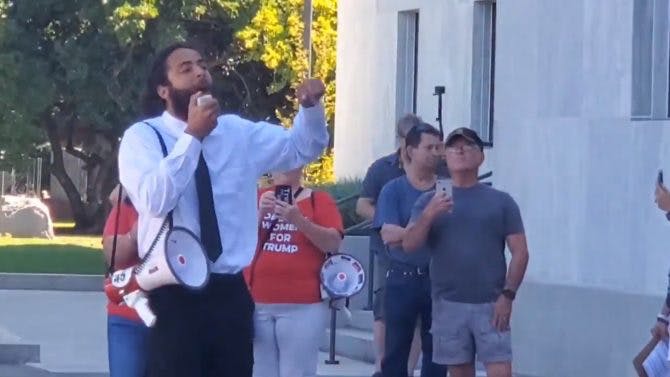 Salem, OR – Is it November yet? A Trump rally in Salem, Oregon turned predictably ghastly this Labor Day, as supporters carried automatic weapons around while speakers blasted the Republican agenda through megaphones. One speaker even compared LGBTQ people to pedophiles and called for the killing of Democratic politicians for supporting the community. Videos from the rally went viral on social media, including a clip of the as-of-yet unidentified speaker addressing the queer “agenda.”

“We have said all this LGBT agenda has set us back,” he says, pacing the ground before a group of Trump supporters. “They told us we were crazy. They told us we were homophobic. But the God’s honest truth is, their pedophile agenda has been normalized. It is being pushed forward. I’m a goddamn man, but I think these Democratic leaders who allowed this to happen need to be shot dead in the streets.” Predictably, the crowd erupts in cheers.

Despite repeated claims by the Trump campaign that he’s the most pro-queer President in American history, Trump’s record shows his administration has actually eroded LGBTQ rights nationwide. The Republican platform for the 2020 election also calls for a ban on same-sex marriages, and forbidding transgender people to serve in the military. (Queerty – David Reddish at https://www.queerty.com/trump-supporters-cheer-speaker-calls-murder-lgbtq-allies-20200908)