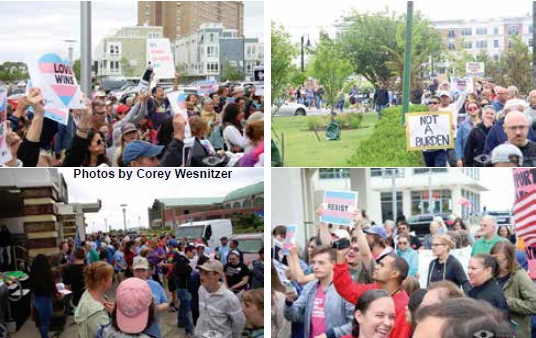 Let me start this article by saying that I’m just a drag queen over a certain age who has been performing for half that age. I’ve never felt “different” or felt as if I were “trapped in another body.” I’m just a man with a passion for the performing arts, comedy, and drag. Throughout my life as a gay man, I’ve had many friends that felt differently. They decided to come out as trans men and women. I respect that. This is America, the great land of opportunities. The land of living your own truths and living freely.

On July 26th, one of those rights disgustingly was violated. Number 45, as I like to call him, tweeted:

After consultation with my Generals and military experts, please be advised that the United States Government will not accept or allow transgender individuals to serve in any capacity in the U.S. Military,” Trump said in a series of tweets Wednesday morning. “Our military must be focused on decisive and overwhelming victory and cannot be burdened with the tremendous medical costs and disruption that transgender in the military would entail.

Now, before diving into the mess of the ban, let’s talk about the actual act of tweeting this. What sitting US president actually fires news like this on social media, especially without consulting any members of his administration? But while Trump’s tweet states that he consulted with his generals and military experts ahead of making the announcement, US defense officials have indicated that many of the top brass were caught off guard by the policy change.

One of the heads of the military branches was informed by a staffer of the president’s tweets on transgender policy and had no idea it was coming, an official said.

Adding to the confusion is that Trump’s decision came without a plan in place to implement it.

The main excuse he used was medical costs and disruption. Hmm … I’m not so sure about that. Let’s take a look at the following study:

A 2016 Rand Corporation study commissioned by the Defense Department concluded that letting transgender people serve openly would have a “minimal impact” on readiness and health-care costs, largely because there are so few in the military’s 1.3 million-member force.

The study put the number of transgender people in the military between 1,320 and 6,630. Gender-change surgery is rare in the general population, and the Rand study estimated the possibility of 30 to 140 new hormone treatments a year in the military, with 25 to 130 gender-transition related surgeries among active service members. The cost could range from $2.4 million and $8.4 million, an amount that would represent an “exceedingly small proportion” of total health care expenditures, the study found.

The military spends $41.6 million annually on Viagra alone, according to the Military Times analysis – roughly five times the estimated spending on transition-related medical care for transgender troops. So, explain that to us, number 45!

The American Civil Liberties Union called the decision “outrageous and desperate” and said it was exploring ways to fight the policy shift.

“Let us be clear. This has been studied extensively, and the consensus is clear: There are no cost or military readiness drawbacks associated with allowing trans people to fight for their country. The president is trying to score cheap political points on the backs of military personnel who have put their lives on the line for their country,” said Joshua Block, senior staff attorney with the ACLU’s LGBT and HIV Project.

Rep. Dan Kildee, (D-Michigan), the vice chair of the congressional LGBT caucus, called Trump’s decision a “slap in the face to the thousands of transgender Americans already serving in the military” and said it “undermines our military’s readiness.”

“Anyone who is willing to put on the uniform of the US and risk their life in service to our country should be celebrated as patriots, regardless of their gender identity. This short-sighted and discriminatory policy will make America less safe,” said Kildee.