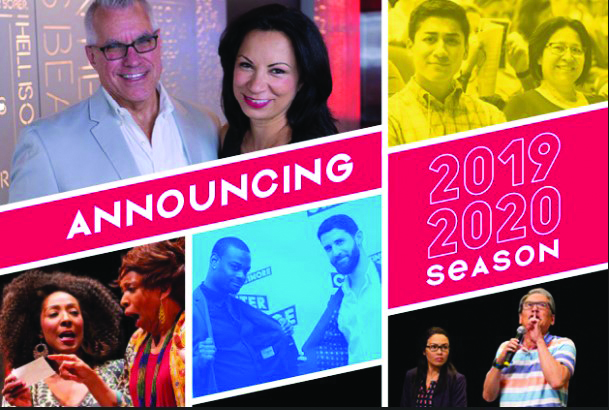 Baltimore Center Stage recently announced its exhilarating season of Mainstage plays to mark the debut programming under Artistic Director Stephanie Ybarra. The 58th season includes the directorial debut of Broadway and screen star Taye Diggs with Thoughts of a Colored Man by Keenan Scott II; a fresh take on the immortal play The Bacchae by Euripides; topical themes in a contemporary musical by Quiara Alegría Hudes and Erin McKeown’s Miss You Like Hell; a dramatic comedy about family dynamics in Richard & Jane & Dick & Sally by Noah Diaz; hilarity through a retelling of the exploration of the Grand Canyon in Men on Boats by Jacklyn Backhaus; and a play that tackles a community’s complicity in its own struggles in Donnetta Lavinia Grays’ Where We Stand.

Artistic Director Stephanie Ybarra recently chatted with Baltimore OUTloud. “This upcoming season – the first that I’ve programmed at Center Stage – is a rollicking and heartfelt adventure from theatre’s newest voices back to its roots, upholding theatre’s original promise to catalyze conversation and facilitate reflection. Each show engages with today’s most pressing civic questions with unapologetically theatrical style, and most importantly, with loads of joy. I believe this season brings stories, both old and new, that resonate deeply.”

Everyone has baggage in Miss You Like Hell, running from September 12th to October 13th. This timely mother-daughter musical is about escaping and belonging. Join Olivia and her mother on their cross-country road trip. Mothers may teach you where you come from, but they can be the trickiest things.

Directed by renowned artist Taye Diggs and written by Keenan Scott II, Thoughts of a Colored Man (running October 10th to November 10th)blends language, music, and dance. Welcome to the vibrant inner life of being black, proud, and thriving in the 21st century. Set over a single day, this richly theatrical mosaic goes beyond the rhythms of the basketball court and the boisterousness of the barbershop to shed brilliant light into the hearts and minds of a community of men searching for their most triumphant selves.

Men on Boats (running from November 29th to December 22nd) is a rollicking adventure that tells a hilarious, true(ish) history of the Grand Canyon. Audiences tag along on a journey that throws the history book – and all the men inside it – out the window in this subversive retelling of the one-armed explorer John Powell and his exploration of the American West.

The classic world of “Dick and Jane” is beginning to fracture in Richard & Jane & Dick & Sally. Running from February 6th to March 1st, 2020, the story is a witty and raw look into one dysfunctional and dissembling family. Followed up by Where We Stand (running April 2nd to April 26th, 2020), this brand-new fable of penance is filled with humor, heart, and music. When a town is running low on compassion and a man is stripped of companionship, just one kind stranger can tip the scales. Audiences will join in as one storyteller spins a supernatural tale of loneliness seduced by kindness and asking “What do we owe each other?”

Center Stage’s 2019-2020 season comes to an end with The Bacchae (running from April 30th to May 24th, 2020). This is not your English teacher’s Greek tragedy. Dionysus is totally over your drama, and he’s going to incite the women of the land to raise some hell in the greatest party in recorded history. Closing the season with a political exclamation point from the birthplace of democracy, The Bacchae hits the Mainstage at the same moment the nation surges into its primary elections.

“Audiences can expect to experience warm and joyful stories that represent the broadest scope of humanity – across axes of race, gender, sexuality, and more – from some of the most exciting and talented artists in today’s theatre scene,” says Ybarra. “We hope audiences will join us in laughter and contemplation as they discover the work on our stages and that they will join us too in conversation through the robust slate of civic engagement activities accompanying our shows.”