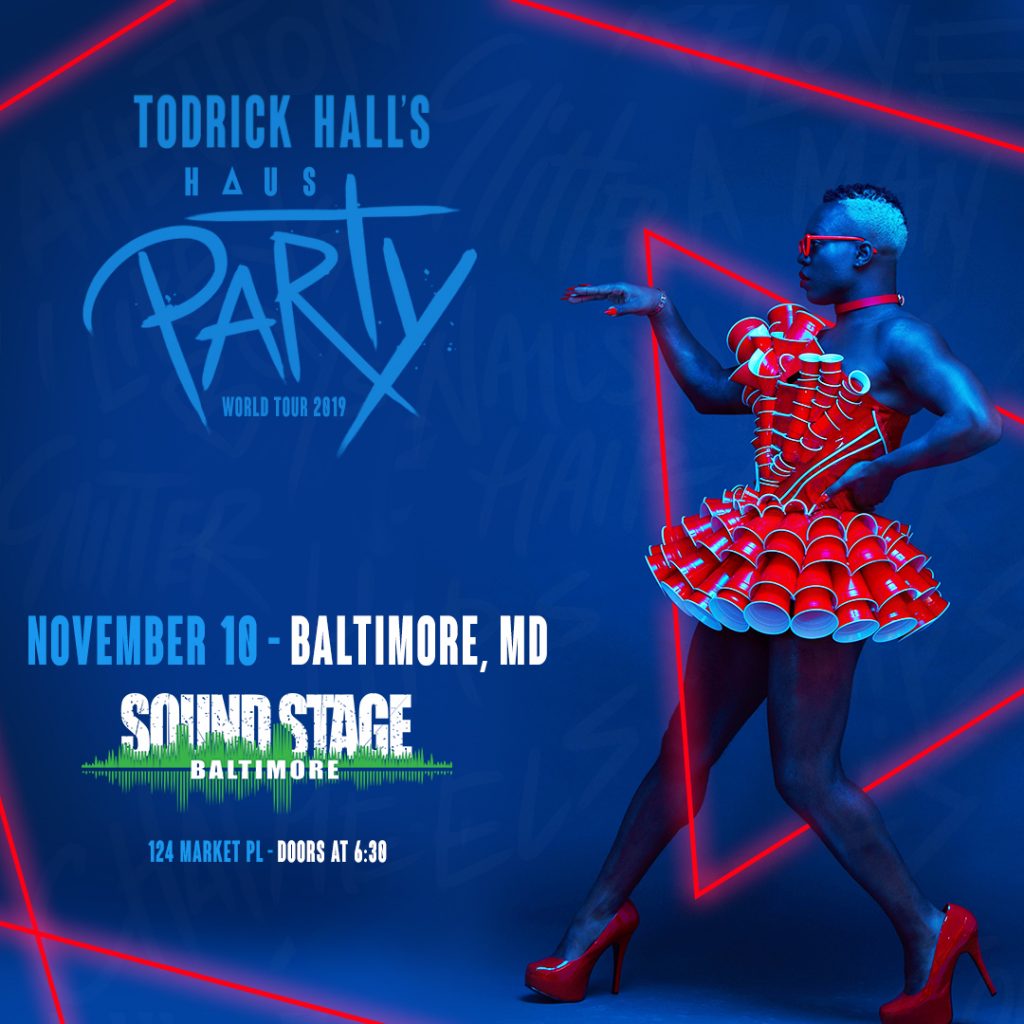 The always-talented Todrick Hall will bring his “Haus Party World Tour” to Charm City on Sunday, November 10th. The Broadway actor, viral sensation and musician will perform at the Baltimore Sound Stage featuring brand new sets, costumes and music from his three-part album Haus Party. Baltimore OUTloud chatted exclusively with the performer in anticipation of his upcoming performance.

Todrick Hall: First of all, and I’m not just saying this because I’m on the phone with you, I absolutely love coming to Baltimore. It’s one of my favorite cities to perform in. Every single time we come the audience has been just next-level, blowing the roof off of the venue. So, I’m really, really excited to come back there.  The difference between this show and the past tours is they all have been pretty theatrical in their format.  This the first time it’s just legitimately a party.  I think that the title of the tour really speaks to the essence of the concert experience audiences are going to have.  There’s lots of costumes, and lots of choreography.  I feel like it’s very action-packed.  Also, if someone has been a fan of mine for a long time, I think that they’ll get everything that they want because it goes over my entire discography of all the songs I’ve done.  From YouTube viral videos up until the current music, and even a song that’s been unreleased audiences will get to hear it all.

Haus Party 1 and Haus Party 2 were both absolutely fabulous albums. Where do you draw your inspiration for your music?

I get inspiration every single day in everything I do.  I could be driving down the street and see a billboard or see a quote that someone puts on social media. Oftentimes, I have a lot of ideas throughout the week and I’ll write them down. Even right now, I have probably 75 ideas for concepts of songs. I’m being inspired for music to write for next year, as we speak. I get inspired by movies, and I see a lot of live theatre.  The smallest thing can inspire a song.  Sometimes, I’ve been inspired just by fashion. I see a costume and I think, “I really want to wear this. What song can I write to give myself the excuse to spend the money on this costume?”  As backwards as that seems, that has been completely how some of my most viral videos have been spawned.

You are always working tirelessly with many, many creative projects. From your music to performing live in concerts to performing on Broadway to “RuPaul’s Drag Race.”   What keeps you motivated?

I just love performing. I don’t know what it is about it.  There’s a lot of people that wake up and you have to get them on their feet to do things.   There’s a part in Sister Act 2, which is one of my favorite movies from growing up, where Whoopi Goldberg says to Lauryn Hill, “If whatever you think of when you wake up in the morning, if it’s the first thing that you think of, then that’s what you’re supposed to be doing.” Every morning, I wake up and I’m so excited to create art and to perform and to make music and to write and tell stories. I guess it’s just part of my DNA.  I remember seeing a musical for the first time – the Nutcracker ballet – as a child.  There was nothing like that feeling when I saw the theatre. I fell in love, not just with the show, but with the smell of the theatre, the smell of the food, the sound of the orchestra warming up, the smell of the fog machine that was coming out on stage. So, honestly, it’s not difficult for me to be motivated.  My fans always send me such awesome things through Instagram and DM’s on Twitter. To see how much me being truthful with myself has helped them and changed their lives, and in some cases saved their lives, is the reason you would want to do anything. If I get to do what I love, and it’s also saving people’s lives, then it’s a win-win-win situation all around. That may be a cheesy answer, but I just love performing and writing music. t