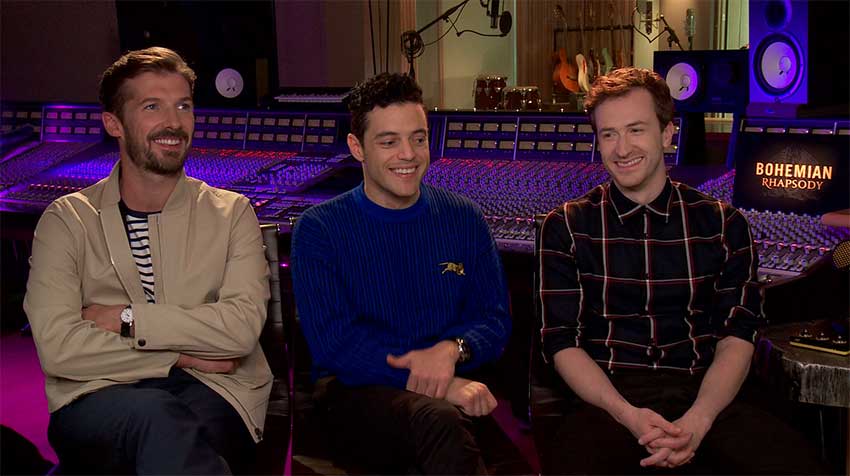 First things first, for all of those concerned about the way that Freddie Mercury’s homosexuality is depicted in the Bryan Singer’s Queen biopic Bohemian Rhapsody, you can relax. From the minute you first see Mercury, played brilliantly by Rami Malek (complete with prosthetic teeth), there is no doubt that the king of Queen was, in fact, a queen. Yes, his relationship with “fiancée” Mary Austin (Lucy Boynton) gets a fair amount of screen time. But, so do his same-sex attractions, from being cruised by a trucker outside of a men’s room to his relationships with manager Paul (Allen Leech) and later his lover Jim (Aaron McCusker).

Now that that’s settled, it’s safe to say that, as biopics go, Bohemian Rhapsody does a respectable job of telling both Mercury’s story and giving the audience insight into the history of the band itself. The backstory of “Bohemian Rhapsody” and “We Will Rock You” are worth the price of admission alone. I had the honor speaking to Malek, as well as Joseph Mazzello and Gwilym Lee (who play Queen band members John Deacon and Brian May, respectively) while they were in Miami shortly before the movie opened in theaters in November 2018.

Gregg Shapiro: I’d like to begin by getting the obvious questions out of the way first. Would you each please name your favorite Queen song and favorite Queen album?

Jospeh Mazzello: “Somebody to Love” is my all-time favorite, and this is a boring answer by A Night at the Opera is such a masterpiece that, all told, I’d have to say it’s my favorite album.

Gwilym Lee: Yeah, probably the same. But I really like Queen one, the first album, just because you hear them working out who they really are. You hear them as a really young, slightly naive band that sounds a lot like other bands of that time because they’re still trying to find their unique sound. There’s a lot of Led Zeppelin influence. But there’s something quite pure about it as a rock band.

Rami Malek: As an album cover, maybe to flip this a little bit, I like News of the World.

RM: Yes, the robot, which they’re currently touring with. We watched so much archival footage and to hear them talk about “We Will Rock You” and “We Are The Champions” (both from News of the World) as something they always thought about as a pair, and a true audience participation song that features so heavily in the film; I’ve got to pay homage to that.

GS: Yes, there’s that great scene in the studio where we see the genesis of the song. Prior to making Bohemian Rhapsody, where did Queen rank on each of your lists of favorite bands?

GL: It’s pretty high up there. Their songs are so universal. You hear them everywhere growing up. Sometimes you have to remind yourself that they wrote the songs that they did. I think people are going to watch this film and be shocked to learn, oh, they wrote that one, as well. What’s been lovely about doing this project is going back to the origins of their songs. Seeing how they evolved and the imagination that it took to come up with such unique songs.

JM: I made a little student film when I was in high school and I put “Another One Bites the Dust” at the end of it over the credits. It was like “final cut one” or something. Then Queen just started popping up for me. I directed a film and everyday before going to the set, to pump myself up I’d listen to “Somebody to Love.” Then it was in college where I feel like I found a new level of appreciation for them and I became a Greatest Hits fan. Every new song I heard by them was my new favorite song. Doing this movie changed everything. There were songs I didn’t think about too much or seemed like one of their mediocre songs. When you learn how to play it, the intent behind it, why they wrote it, how all four of them wrote hits – when you get all of that knowledge it takes on a whole new meaning to you. I literally walked in the room singing.

GS: Yes, I heard you singing “Somebody To Love.”

RM: That doesn’t get old.

RM: No, no. We love it. We got this question on set a lot. We’d be playing a song, take after take, by the end of the day…I was a production assistant on a music video once where I was like, “If I ever hear that song again, I’m going to do bad things.” But that never happens with Queen. Collectively we’ve all said this without talking about it. We’ve been listening to Queen non-stop in a way that some might think is odd or some might think is totally understandable.

GS: That speaks to the power of the music.

RM: It does. Hearing Bowie with Queen and Freddie doing those kinds of operatic warm-ups that he ended up incorporating into the music was revolutionary to me. Then you get involved in the story behind the making of “Under Pressure” and how things come about with them. How inspired and spontaneous they were together is something I find so fascinating.

JM: After I was done shooting, I was like “What songs didn’t we cover? What songs didn’t I get to know?” That was the rabbit-hole I went down. You’re loving so much of it that you want to learn more and more and be able to take it in as a fan of the music rather than having the responsibility of performing it.

GS: You hope that that’s what a movie like this will do, to get people to go and do the research.

GL: So many people that we’ve spoken to who have seen the film say that the first thing they do is go back home and watch the Live Aid footage which I think is great. Everyone needs to see it. It’s such an iconic and historic moment. We watched it hundred and hundreds of times in preparation for the film. I still watch it to this day.

GS: There’s a scene where Freddie plays piano upside down and backwards which made me wonder if each of you plays a musical instrument.

JM: Only upside down.

RM: I looked at piano and it’s been a mystery to me my whole life. That’s the one thing people forget about Freddie. The guy was a virtuoso. Taking piano lessons, it took quite a while for me to learn how to play “Bohemian Rhapsody” or “We Are the Champions” But at one point I saw in the script, oh he’s playing upside down as well. I felt like, “If you’re going to make my story from his point of view, I’m going to throw everything at you.”

GL: I played a little bit of acoustic guitar, but nothing to the level of Brian May’s genius. We all put in a lot of work. We got grafted pretty hard trying to play our instruments.

GS: Joseph and Gwilym, what were the challenges of playing living people, as in the case of John Deacon and Brian May, respectively?

JM: It literally never leaves your mind every time you play a real person. As an actor, you want to go into any job giving it your absolute all and everything. It just feels like there’s this extra motivation when you have this intense responsibility to the actual person you’re playing. To their family and, in this job, to the Queen fan-base, which is massive. We hear from them all the time, they’re so invested in this. Every day you walk on set, it doesn’t matter if you’re tired or what’s going on in your personal life, you always keep that in the forefront of your mind and it focuses you in in a way you can’t even imagine.

RM: I looked forward to knowing when Brian May was going to come (to the set). It just elevated me.

GS: It didn’t make you nervous?

RM: It could have. But he stepped on the scene and he was warm. He was taking pictures of it. There’s such humility and class in the man. He made us feel like it was a privilege to have us telling his story.

JM: He was taking videos on his cellphone of us doing Live Aid. It was like, “That’s not how this works [laughs]. We’re trying to impress you.” It was a cool moment for us.

GS: What do you think Freddie Mercury would think of Bohemian Rhapsody?

RM: It’s hard enough emulating him in any way or trying to fill those shoes. It took me quite a while to come close in this film. To begin to ponder what this man was thinking. Ultimately, I think what the film does really well, it doesn’t spend too much time going into the darker places, the illicit places. We do that just so we can show just how grand and big his life was.

RM: Rich and complex and full. I think celebrating the magnificence of the man was all we hoped to achieve. I just hope there’s a moment where he’s like, “Well that was colorful and enjoyable. I hope you all had a real good time.”

GL: It’s nice to be reminded of him. He was a celebrator of life; an incredible individual. It’s nice to remind the world of him. We need people like Freddie Mercury.