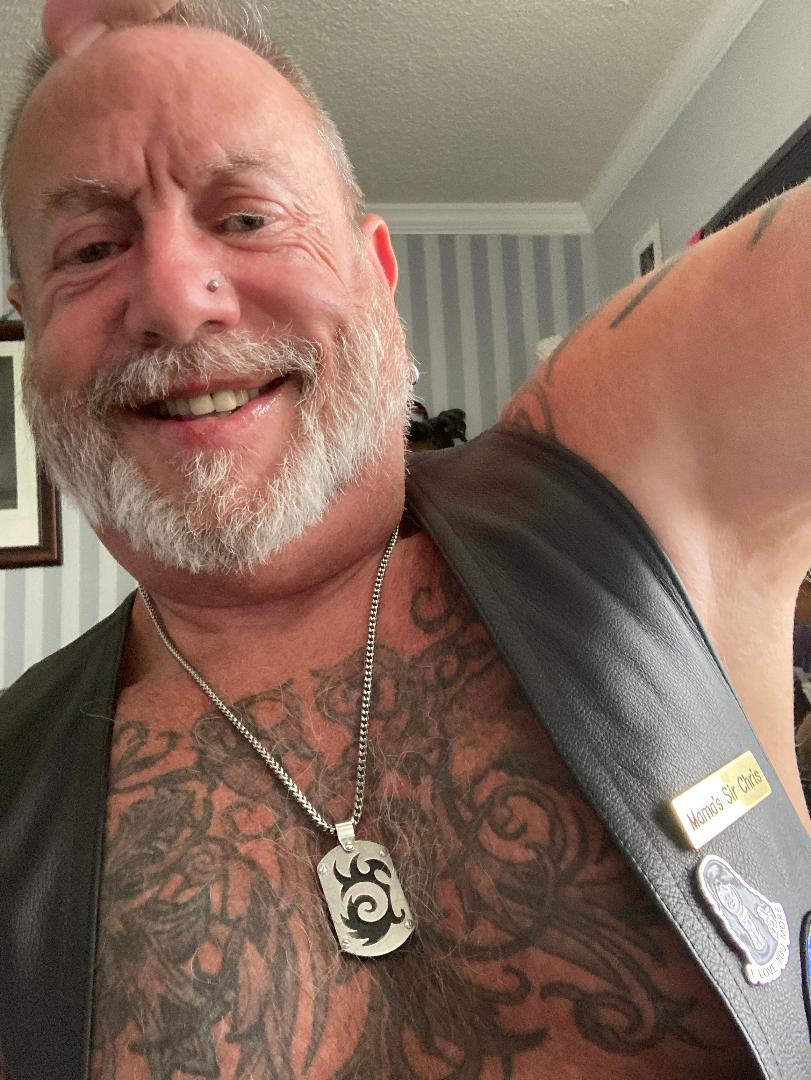 It is a long way from the small town of Owings in Calvert County, Maryland to the sunshine of Ft. Lauderdale, Florida. For Chris Hacker (Monroe), there were many bumps along the road. Thankfully his discovery of the leather community helped guide him on his journey. 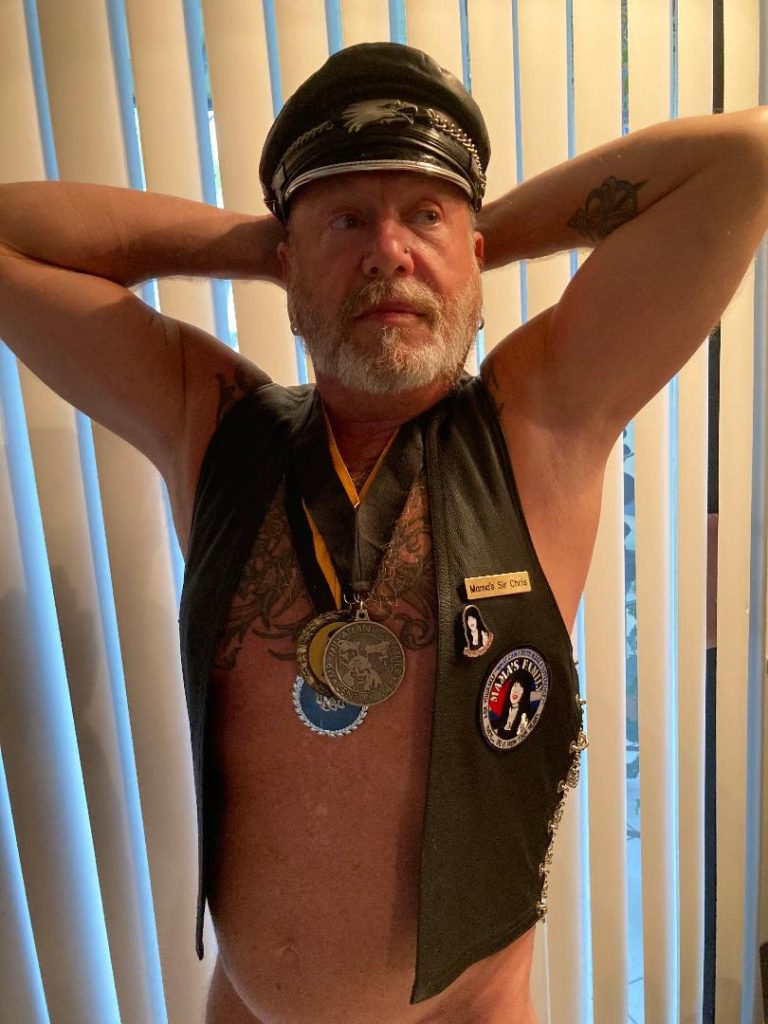 Owings is a small town of 2,528 (2019) and growing up Chris fought the feeling that he was gay. He dated woman. When he was 19, he discovered that people around him were gay, including his best friend. When he had his first gay experience, he realized that he enjoyed being intimate with men. He also started buying and collecting leather. He didn’t wear it yet, but soon had bins full of it. Was there another urge he was fighting? 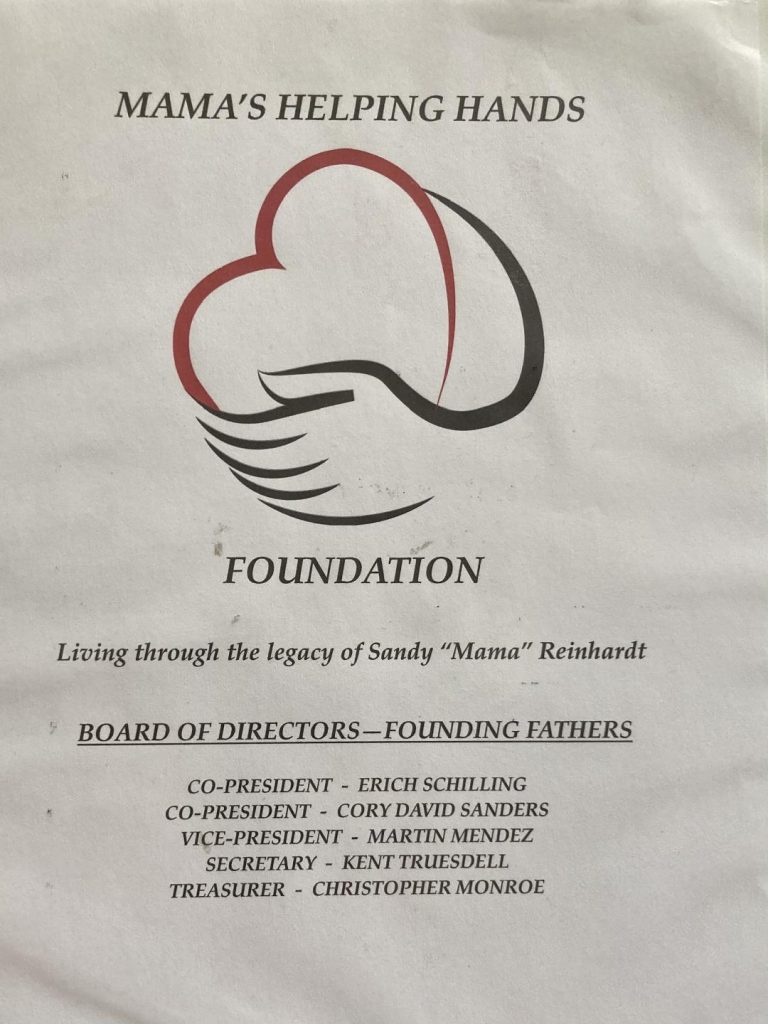 Chris said he was aware of the growing AIDS epidemic when he learned from the news that movie star Rock Hudson had tested positive. In 1985 he met someone and they both decided to get tested for AIDS at DC’s Whitman Walker Clinic. His friend tested negative, but much to his surprise Chris tested positive. “My number of partners was only in the single digits!”, he added. His friend tried to be supportive but couldn’t even say “HIV.” He called it “the situation.” Chris felt lost and angry. He felt like he knew who infected him and even got a former lover’s death certificate to confirm it.  Although he started taking all the drug cocktails, he felt like he was just “living to die.

By 1987 he was hospitalized with pneumonia. Hospital staff didn’t even want to come into his room to take blood or bring food. He was given six months to live. To add to his stress, he still had not come out to his family. Although his sister knew he was gay, he wanted to make sure his parents found out from him and not the hospital workers. Thankfully, his parents were supportive and when he was released from the hospital, his mother even drove him to Georgetown University to participate in drug trials.

By 2005 he was ready to take his life in a positive direction. He needed a change. It was time to open those bins of leather. He met a man at the Baltimore Eagle who encouraged him to compete in the Mr. Maryland Leather 2006 Contest in November of 2005. He did not realize it at the time, but that man was Mr. Maryland Leather 2005 Lord Steve Cather. Chris was very naive about the leather community. During the contest, he even wore a dark suit and pink dress shirt to the interview. (He thought of it as a job interview.) For Chris the contest was an amazing experience and he was thrilled to have been select first runner-up.  In January of 2006, he competed in the Mr. Mid-Atlantic Leather 2006 Contest as the runner-up to Mr. Maryland Leather traditionally did. Prior to MAL, he studied up on the leather community and asked other leather titleholders to coach him. He met with Steve Cather and Mr. Maryland Leather 1999 David Allen helped with his speech. He later became a member of COMMAND, MC. There were 12 contestants for Mr. Mid-Atlantic Leather 2006, and they were all veterans in the leather community. Chris came in 6th out of 12 and he figured that was pretty good for a newbie. Chris had found his confidence and was now happy in a new relationship, but his leather journey was not over.

He was asked by leather contest producer Rik Newton-Treadway if he would be interested in running for Maryland LeatherSIR 2006. Chris wanted to do good things for his community and was disappointed that the person who had been selected Mr. Maryland Leather 2006 resigned before his year was over. Chris hit the stage one more time. This time he took home the sash.

Chris had a wonderful title year and with Maryland Leatherboy 2006 boy Jason Sentz, traveled everywhere. With the devastation caused by Hurricane Katrina still a big issue, they raised money for the relief fund. They sold bracelets and caps. They even danced onstage at Spectrum, a go-go boy bar in Baltimore.

In 2011 when his relationship ended, Chris accepted a job transfer to San Francisco. The same job has now taken him to Miami, and he lives in the Ft. Lauderdale area. When we spoke recently Chris was very excited about a leather event that he is involved in that was being held at the Eagle Wilton Manors on May 15th. As a longtime member of Mama’s leather family, a large group of leather people who do fundraising and have been given a leather family name by Mama Sandy Reinhardt, a Mama’s Family Reunion and Cookout was organized with Mama herself flying in from California. Chris has helped put together a big surprise for Mama Reinhardt and since this column will not appear until after May 15th, I can reveal it. Chris and several other leather people in his area are starting a new charity to be called Mama’s Helping Hands Foundation. The foundation will help continue the legacy of Sandy “Mama” Reinhardt for many years to come. Look for a website soon.

It has not been an easy journey for Maryland LeatherSIR 2006 Chris Hacker. In his darkest hour there was even a suicide attempt. He is enjoying the Florida sunshine now and living his best life. He recently took part in the in-person AIDS walk in his area that raised 1.8 million dollars. He has a tattoo on his backside of a boot print to honor his mother who always said, “Pull yourself up by your bootstraps.” The leather is out of those boxes now and his work in the leather community continues. Chris put it best: “Be you and be true!”