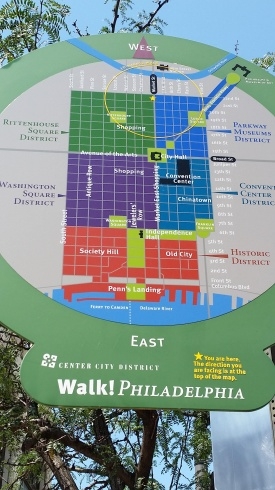 Our Sister City to the North

An advantage that every Baltimorean has is that we are practically neighbors to a city in which this nation’s Constitution and Bill of Rights was written and signed – Philadelphia, Pennsylvania. Philly is significantly bigger than Baltimore and has a lot to offer anyone who takes a day-trip or a long weekend visit.

We started our get-a-way with a walk down to Independence Hall, where the Constitution was written and signed. We didn’t go into the building, but it was still a great experience to simply walk by. I saw may people in big groups taking pictures and I felt very fortunate to live so close to such a monumental building and city. Around the corner we were able to visit what was left and a partial recreation of the house that George Washington lived in before making his way to what is now the nation’s capital, Washington, D.C. There were interactive videos that talked about the monument itself and a little bit of Washington’s life while in Philly. This lead us directly to the building in which the famous Liberty Bell is housed. It was not overly exciting, but I think it’s one of those things that you just have to do for the experience.

Next, we paid a $5 admission to enter the Benjamin Franklin Museum. I have to admit, some of the information and the interactive displays were fun and very interesting – definitely worth the $5 to learn a little bit about one of our founding fathers.

Philly is very “walker-friendly” and we only used Uber once to get to south Philly for dinner on Saturday. Other than that, we walked everywhere. Rittenhouse Square is absolutely beautiful at both night and in the day. We were able to check out a lot of the beautiful, detailed architecture that the city is home to by simply walking, not driving, because you miss so much when you travel by car.

That night we checked out a couple different places to see what the nightlife had to provide. Eye Candy has three floors that all feel like completely different establishments as you climb the stairs to the top floor, which consists of an open, outside bar and lounge area. Cover is only $5 to get to the top two floors. I wouldn’t go again and not pay the small cover, it’s definitely worth it. Eye Candy was home to a good mix of people – there was both a large gay male and female population with some female dancers and servers. It was nice to see the mixture. We also made our way to a bar called the Bike Stop that deserves the label of a leather bar. The downstairs lighting was very dim, which appropriately set the mood for the type of bar it was, but it was a fun atmosphere. It’s not for everyone, but they have a pool table on the main floor and the people were nice.

The next day we woke up and took a lovely stroll to the Rittenhouse Square area where we decided to check out the Mutter Museum, which consisted of medical oddities from years past. It was very interesting, to say the least, decently priced, and very educational. It was a little cramped, but definately worth the entrance fee. Once we finished with the museum we found the market on the square, purchased a cold Popsicle on the hot day and decided to grab a bite to eat and a cocktail at a place called Parc. It’s a French-style Bistro that had outside seating, good food and good drinks. I would recommend grabbing a nice and refreshing drink called the Basilic, you can’t go wrong.

We left Parc with a full belly, walked through some shops in Chinatown, and made our way to the Duck Tours to ride a vehicle that can operate on land and in water. Paying $30 a piece was a little expensive, but it was nice to have a guided tour by both land and sea. I think everyone must try it at least once.

We ended our night at Woody’s, paid the $10 cover to go upstairs to check out the three dance floors and enjoyed the laser and light show. Maybe I’m just getting a littler older, but a couple years ago, I would have had the time of my life there.

Sunday was lazy and relaxing. We left the city, but took with us some great memories and headed back to Baltimore to think of where our next adventure will be.