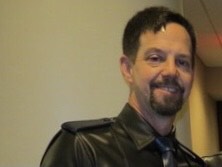 In 1997 Patrick Grady was working as the Director of Catering at the Washington Plaza Hotel on Logan Circle in Washington, DC when he learned that a leather club called the Centaur MC had booked the hotel for their Mid-Atlantic Leather Weekend. Although born in the small town of Peru, Indiana, Patrick was from a military family whose father was stationed in England and brought him to Europe as a small child on the RMS Queen Elizabeth, so he had seen a thing or two in his life. Plus, he always loved seeing men in boots and uniforms dating back to his years growing up in England. While living in Germany, he discovered that the German soldiers, unlike Americans, were far from prudish and had no problem stripping down and going for a swim. In those pre-internet years, he learned about the world by sneaking into adult bookstores. He moved around a lot and learned a lot too.

Patrick’s work in the hospitality industry brought him to Washington, DC where he worked at George Washington University, the World Park Hyatt, and the historic Morrison-Clark Inn & Restaurant prior to the Washington Plaza. Unfamiliar with the drinking habits of leather men, he thought the hotel would need to stock lots of cordials and liquor. Beer and vodka turned out to be the popular items. Mid-Atlantic Leather Weekend proved to be a huge success and was very profitable for the hotel. The event was booked there again for the following year and the smell of all that leather had him hooked. He soon found himself becoming a “groupie” for the Centaur, MC.

Each year during MAL, he could be found at the Washington Plaza and although he got to meet and become friends with many MAL attendees, he was never in leather because he was working. Being the man in the perfectly pressed business suit earned him the nickname “the suit guy.” He would sometimes change into black jeans. Mr. S. Leather finally gave him a pair of black leather jeans and told him, “We want to see you in leather!” He was eventually asked to become a member of the Centaur MC. He started as an associate member because he did not think he would have the time to devote to the club. Later he became a full member.

Patrick’s skills in running and organizing events has been used for many years as the chairman for Mid-Atlantic Leather Weekend. This is a position selected by the president of the Centaur MC. MAL eventually outgrew the Washington Plaza Hotel and is now held at the much larger Hyatt Regency Capitol Hill. (which still sold out in under 15 minutes for 2022.)  He is currently the MAL 2020 – 2022 Chairman. After an enormously successful MAL in January 2020, he had the unfortunate task of breaking the bad news to the Hyatt that the 2021 event would have to be cancelled. He says he hand-carried the Centaur’s cancellation letter along with a bouquet of flowers to the Hyatt. DC still has a 25% capacity requirement for bars and restaurants and has limited gatherings to ten people, so hosting an event that attracts thousands was out of the question.

I asked Patrick what he thought it was that makes MAL so popular. He said that when you walk into the Hyatt during MAL weekend, you are entering a safe, relaxing, welcoming space. For many it is like coming home as they get to catch up with old friends and make new ones. He has seen the leather community grow with the leather boy movement, the pups, furries, rubber enthusiast, superhero fans, and more. Every fetish is welcome at MAL. The Centaur MC have a long tradition of hospitality, but Patrick was quick to add: “They are not a show club!”

With all the changes in the world due to COVID-19, I had to asked what he thought MAL would look like in January 2022. He said that currently it is hard to tell. In June he will be meeting with the nearby overflow hotels, some of which have recently changed hands. In the past, buses were provided to shuttle attendees to the DC Eagle. Now that the bar is gone, it may be time to create some other fun activity like a street party in the blocks between the surrounding hotels. There is also talk of moving MAL to an even bigger hotel, but the Centaurs currently have a contract with the Hyatt for another two years and the current hotel staff have been wonderful.

It may be a year away, but I know I am already looking forward to Mid-Atlantic Leather Weekend 2022. So is that charming guy in the suit, who has now blossomed into a prominent leather man.