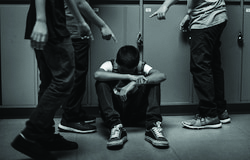 I wore an eye patch from third grade through sixth grade. I was the mixed-race tomboy with one eye. While my obvious differences rarely reared their ugly side in elementary school, they became my sole identifier by middle school. The first time I was called a homophobic slur was when I was referred to as a Pirate Dyke on the school bus. After my flute was stolen and thrown into the yard of an aggressive dog and the school deemed it not their problem, I changed bus stops, where I was pelted with rocks on my way home each day for wearing a coat from Wal-Mart. But once I was home, the bullying would stop. I would tell my parents everything was fine, because little pebbles and routinely being book-checked for complaining about my journey to retrieve my flute was enough added torment in addition to the constant teasing about dressing like a boy and wanting to collect Pokmon cards and skateboard. It was 2000. My internet experience was dial-up and for school and gaming purposes. I could grab a Nintendo 64 controller and Doritos and forget all about my lack of social success as soon as that logo screen flashed on my television.

In ninth grade, my friend believed another girls rumor that I wanted to steal her boyfriend. I was so horribly confused about myself I didnt want anyones anything, I had enough trouble attempting teenage normalcy with my own boyfriend, and he lived in Manhattan! She asked me to hang out after school, and I was so excited to finally start having normal adolescent social interactions, I didnt see it coming when she pushed me over my head down the hill and then proceeded to kick me until she was pulled away. That summer, when I told three friends that I was bisexual, the entire band knew by lunchtime, and I spent the entire rest of high school trying to convince every single girl that I wasnt into them by default. On my 16th birthday, I celebrated at Six Flags by finding out in line for Batwing that my two best friends summer-long feud was staged by them to see which side I would take. After a summer of nervous puking and crying over failing to convince both parties that there were zero sides, just three very hurt teenagers, I do not feel bad about punching the one who masterminded the plot in the mouth.

I am a 32-year-old man who wants to hide when I hear teenagers whisper-giggling in my vicinity, and I didnt have to grow up in a world where every second of our lives is consumed, shared, and depicted by social media. If I were in school now, I can guarantee I would not have the ability to handle a 24/7 barrage of shame, regardless of whether I was living as Asher or Amanda. Just this week, it was released that while there are more resources for queer kids coming out, the suicide rate for queer kids has not dropped. What is the point of making it easier to announce your truth, if living it is no easier? In light of viral response to Quadens suffering, my social media is full of people coming out of the woodwork about their own bullying, and the effects that it has on them to this day. A childhood and adolescence full of teasing, stigma, and shame is profoundly devastating. You do not need an advanced degree to understand that. Being told you are something long enough and loud enough will eventually wear down the self-esteem of the healthiest adults. If there is anything lasting from Quadens mother uploading her childs suffering; it is that the parents of Quadens bullies can no longer diminish the gravity of their childrens words are having on Quaden. Bullying is one of the most complex problems affecting children, and while the causes and effects are numerous and various, the common thread is that the harm suffered to children is crippling and real. Nine-year-olds shouldnt contemplate suicide. And until that sentence is not a reality, we have work to do.