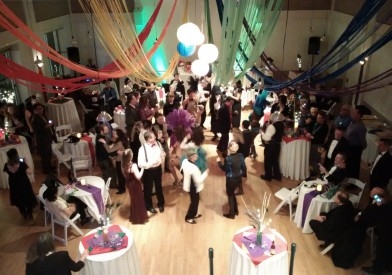 The Frederick Center is hosting the second annual Carnival celebration Saturday February 6th, 2016 from 7 p.m. to midnight. The masquerade / creative cocktail affair is being held at the Hampton Inn Frederick. Themed for the period of time leading up to Lent, the fun evening of dancing also serves to raise funds for The Frederick Center, the county’s non-profit organization which supports the local LGBTQ community.

Now in its second year, Carnival 2016 will feature the sizzling beats of DJ Urban Cowboy, the well-known Washington area disc jockey. The event will again be styled in the South American tradition and feature performances by Brazilian dancers and drag entertainers. Additionally South American cuisine will be featured and an open bar featuring custom Brazilian libations. Stylish attire is requested. Attendees are also encouraged to wear masks, costumes and other Mardi Gras accessories.

Peter Brehm, who is co-chairing the event with Kris Fair, both board members of The Frederick Center, said, “Because last year’s event all but sold out, we’ve moved it to a larger venue that can accommodate more people.” Both Brehm and Fair were surprised by the diverse range of attendees last year. “The event is open to everyone,” said Fair. “It’s a great evening of fun while also supporting the educational, health and social missions of The Frederick Center.”

The Frederick Center has seen an outpouring of support in the local community for this event since its inception in 2015. Businesses including Baltimore OUTLoud, Frederick magazine, the Frederick News Post, Hampton Inn Frederick, and others have teamed up with local activists to provide this one-of-a-kind Frederick event.

“The event’s theme, style, and organization are truly unique to the community,” Fair said. “If you are looking for the one unforgettable party this year, it is going to be this one,” added Brehm.

Tickets are $65 each or $455 for a table of eight tickets. Additionally rooms are available at a special rate of $89 for the night for any attendees. Any questions should be sent to kfair@thefrederickcenter.org.