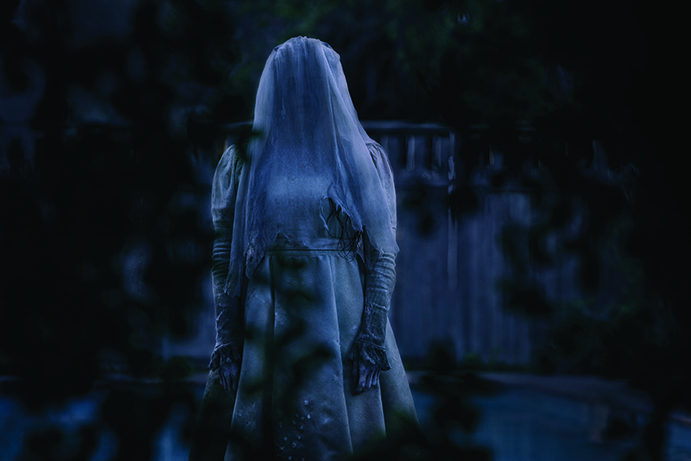 With the recent Pet Sematary remake offering little in the way of fright or originality, a new horror movie has come along that has the promise of some good quality scares coming from the producers of “The Conjuring Universe” … even though The Curse of La Llorona is not being billed as another chapter in that popular franchise.

The story begins in 1673 Mexico, where a woman, her husband, and two boys are enjoying an outing. One of the boys gives mom a necklace and the next thing you know she’s drowning both of her sons, weeping at the realization of what she’s done (although where the husband is at this point is unclear) before she drowns herself. In 1973, social worker Anna Tate-Garcia (Linda Cardellini) is called to check up on one of her clients whose two boys have not been to school recently. Finding the boys locked in a closet, Anna assumes the mom, Patricia, has been drinking and abusing the children despite her pleas that she’s only trying to protect them. The boys are taken into care but disappear from the facility that night, and then their bodies are found on the banks of the river that runs through Los Angeles. Anna’s own kids are waiting in the car, but her son Chris (Roman Christou) sneaks away to see what’s happening and encounters a crying woman whose touch burns his skin. After that, all bets are off when Anna visits Patricia in jail and learns that she’s been praying for La Llorona, the vengeful spirit who took her boys, would take Anna’s children to bring her own back. Within the frightening legend, the battle lines are set.

The Curse of La Llorona, or “the crying woman,” starts out pretty strongly. You probably wouldn’t know it was set in 1973 without the on screen text, but there is definitely a reason for the time period. Linda Cardellini gives a nice performance as the overworked single mom (her police officer husband was recently killed in the line of duty), and Roman Christou is especially good as her son in his first major on screen role. Jaynee-Lynne Kinchen as daughter Samantha doesn’t fare as well, as she mostly is tasked with staring into space. But early on, the film really delivers some good jump scares that, at one point, almost caused me to drop my popcorn. And that 1973 setting is explained as well. While not billed as a “Conjuring Universe” movie, it definitely is tied to the franchise through one specific character. This movie is sort of like how Shazam is set in a world where the Justice League exists, but he’ll never really be a part of the DCEU proper. It’s doubtful that La Llorona will figure into other “Conjuring Universe” films.

First-time feature director Michael Chaves handles the early parts of the film very well, giving us some nice visual scares but perhaps is a little heavy-handed with the loud musical cues to make us jump (something that concerns, as he’s listed as the director for The Conjuring 3, a franchise that has let its visuals do all the work to scare us). But the film completely falls apart once the character of Rafael Olvera is brought into the picture. Rafael is a sort of shaman recommended to Anna by Father Perez, who may be able to help with her alleged supernatural problem more directly than the church can. The problem with Rafael is that actor Raymond Cruz gives him zero personality, often sounding like he’s simply reading his lines from the script. Even when he tries to bring a little humor to the dire situation, his delivery is flat and his performance even begins to have an effect on Cardellini’s, where in their later scenes together she also just sounds like she’s saying her lines (and as much as I love her, she is a terrible screamer … and she has to scream a lot in this movie). This performance just ruined the film for me.

The La Llorona character is frightening enough to send shivers up and down your spine although her appearance seems to change from time to time, from a horrifying special effect (or someone in a nice makeup) to a not so scary spirit when played by the actress from the opening in white face paint and yellow contacts (the black tears are a nice touch though). As far as horror movies go, The Curse of La Llorona has a few good scares and some really intense moments with children in danger (perhaps a traumatic trigger for some, so take note), but one bad performance nearly drags the entire film down. Not great, but still a bit more scary than Pet Sematary.