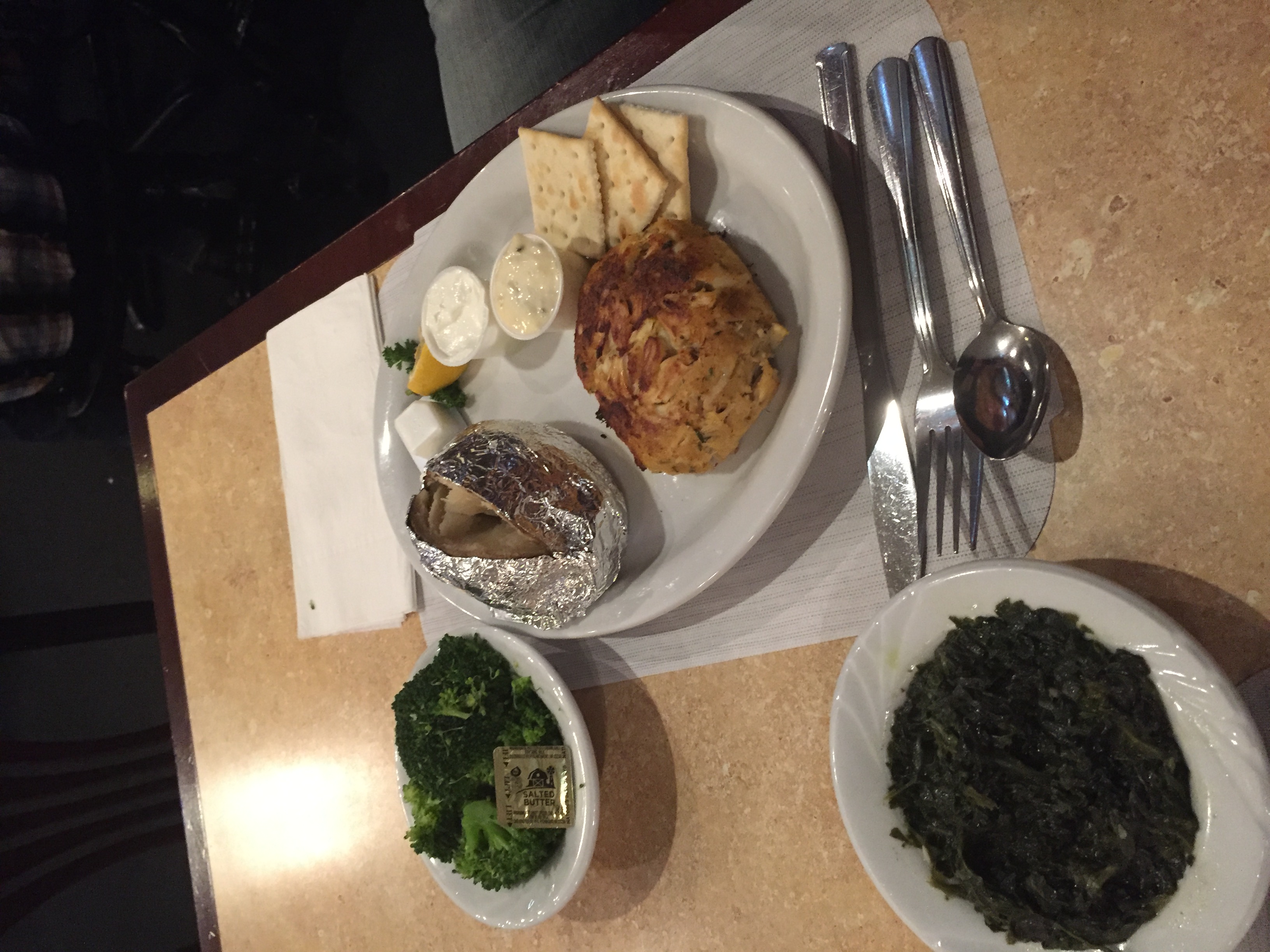 Given that it’s the season of Lent, we were looking for a nearby seafood restaurant on a Friday night. A quick Mapquest search pointed us in the direction of The Crackpot. While I’d never been there myself, Nick hadn’t been in many years, so off we went for something new (for me), and something old (for Nick).

Walking into The Crackpot is definitely a step back in time. As one of my friends stated recently, it is “kitsch,” but in a fun sort of way. My better half noticed right away that a wall had been removed that used to separate the bar from the main restaurant. Today, there’s definitely more of an open feel. The restaurantt offers a casual and comfortable nautical setting, and other than the wall removal, appears not much has been changed since 1972. The Crackpot’s website does state it is “famous as the classic Baltimore ‘retro’ crab house and seafood restaurant. The original crab traps still hand from oars that extend o ver some of the tables. The walls are adorned with many varieties of fish, including a seven foot sailfish and swordfish.”

Luckily, Nick and I managed to arrive just before 7 pm, on time for Happy Hour (from 3 to 7 pm, weekdays). We enjoyed $4 sangrias. Lately, this has become my drink of choice, and I’ve had some really great sangrias, and some really awful. Surprisingly, for $4, this sangria was one of the better ones, and I enjoyed mine while looking over the menus.

The Crackpot offers a varied dinner menu that features not only seafood, but steaks, pastas, sandwiches, burgers, ribs, and more. As I said earlier, given it was the first Friday of Lent, our choices were limited to seafood for the evening. Nick decided on a cup of Maryland Crab soup ($4.50). While it was served piping hot, the soup did not taste fresh, which was disappointing. For our main course, I opted for the Tuna Steak ($20), which is served with two sides. From the selection of fries, cole slaw, baked potato, mashed potato, broccoli, corn on the cob, wild rice, or Seasonal Vegetable, I went with the baked potato and spinach (the seasonal vegetable). I had asked for the Tuna Steak to be served seared. Nick went with the Maryland Classic Crab Cake ($19) with baked potato and broccoli.

We did not wait very long for our meals to arrive. For both of us, the portions were quite large. Nick enjoyed the crab cake, which was good news considering the soup experience. I’d argue the tuna steak was served a little more cooked than I usually enjoy, but none the less, it was quite delightful. Nick’s broccoli appeared much fresher than my watery, overcooked, spinach. Predictable, our baked potatoes were just fine, as they are fairly standard. Overall, I conclude the prices we paid for our meals were fair for the quality and quantity we received.

Throughout the course of our time there, all of the wait staff were quite friendly, and worked hard to make our visit an experience. For those that appreciate nostalgia, The Crackpot is definitely the place for you. The Crackpot serves dinner from 3 to 10 pm, but remember, if you’re going during the week, arrive before 7 for some of the happy hour specials!

The Crackpot opened in 1972, and was one of the first crab houses to fly crabs in from Louisiana year-round. Currently, the Crackpot has won awards for its hot, steamed crabs, mostly recently being Towson magazine (2017) and Baltimore magazine (2017).