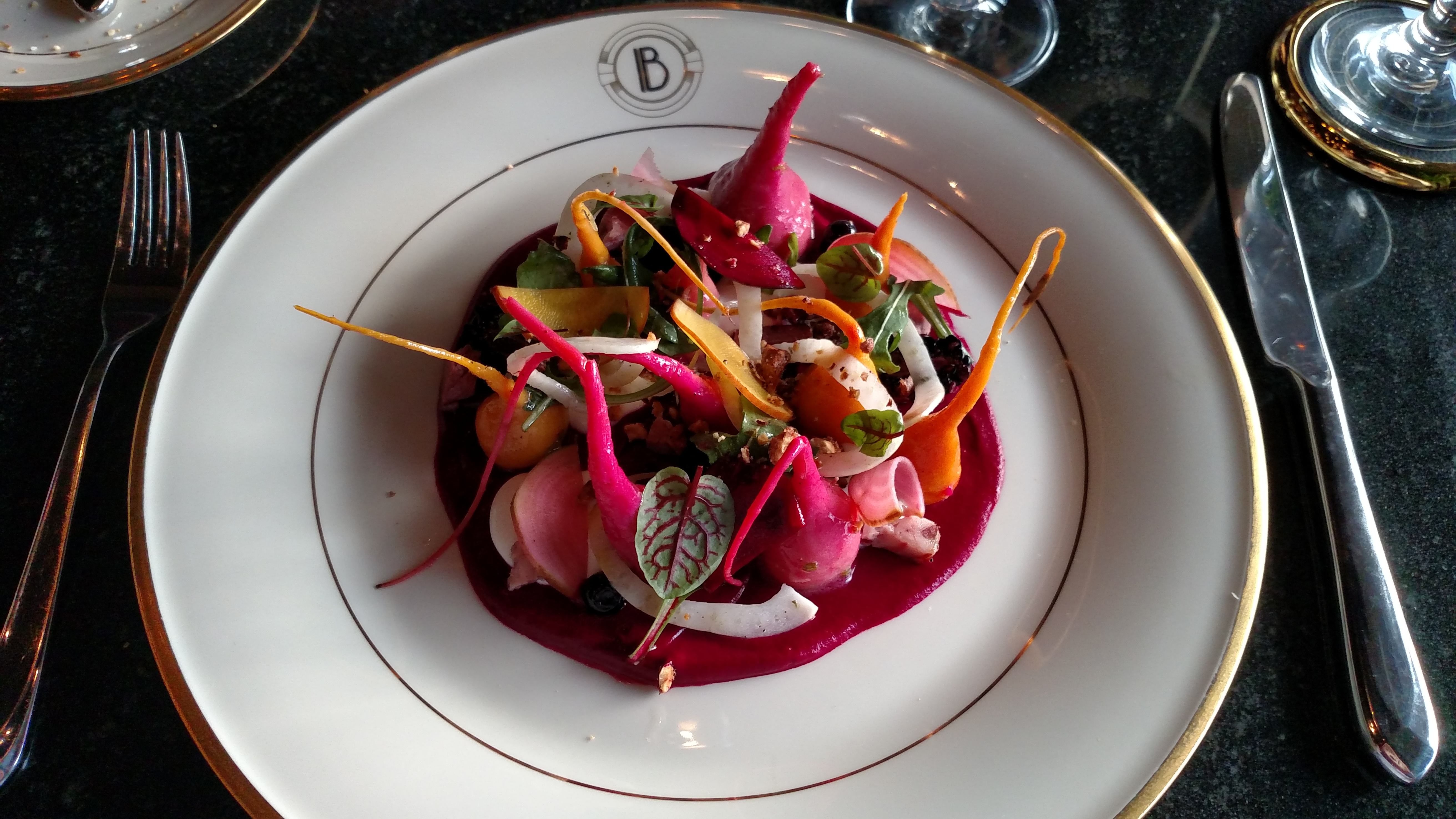 For Nick’s birthday, I wanted to plan something special just for the two of us. A colleague of mine recommended The Bygone to me, as he had taken his wife there for her birthday. Knowing how much Nick enjoys the city, I thought dinner at The Bygone would be a wonderful surprise. Weeks ago, I had mentioned to Nick to keep the evening free, but never told him where we were going, keeping him in suspense for almost two months.

Finally, the evening arrived, and as we drove closer to Harbor East, Nick figured out where we were heading, with excitement. After parking, we walked into the entrance of the Four Seasons Hotel, and then escorted up the elevator to the 29th floor. Stepping out of the elevator, we could not help but notice the breathtaking views of the city. Although there were many window tables available, we were seated in the interior dining room. I was disappointed to say the least. I couldn’t help but wonder how tables are assigned, given that I had made our reservation two months in advance. With Nick being the sport that he is, he convinced me our table was just fine.

Our attentive waiter Darcel, came to take our order, starting with drinks. Nick ordered a Manhattan ($16), while I ordered a Cosmopolitan ($18.25). Settling in with our drinks, we once again looked around the dining area and the views. When designing the dining room, you could notice the great care in creating an atmosphere of the bygone era, including the piped in music. Nothing was rushed, and it was enjoyable to see people dressed up to take in a meal; much like things used to be long ago.

The Bygone menu is rather expansive, and most items are served à la carte. We started with appetizers of Grilled Quail ($24) served with apple cider marinade, braised red cabbage, and marinated figs; and Tuna Ravigote ($18), yellowfin tuna, horseradish, and champagne marinated tomato. Both appetizers were divine. As a second course, Nick had the Beets and Berries salad ($18), which comprised of rainbow beets, chevre, arugula, smoked brisket, berries, and candied walnuts. I decided on the Asparagus Soup ($14). Our second course was served with warm, fresh bread and butter. Being the carb junkie that I am, I could have eaten the entire basket, but wanted to leave room for the main course.

Honestly, all of the main entrée selections were difficult to choose from. After careful consideration, Nick landed on the Rockfish à l’Americaine ($38), served with burst cherry tomatos, couroguttes, parsley new potatoes, basil, over sauce Americaine, while I decided on the Berkshire Pork Loin Chop ($36), which was served with romanesco, shaved cauliflower salad, almond puree, and fig-chocolate sauce. For sides, we picked spiced carrots ($10) and garlic mashed potatoes ($10); again, another tough choice, as all the sides sounded delicious. Having had our appetizers, and already moved on to a second round of drinks, our meals were served, and they looked quite impressive. Truly, I never had a pork loin chop that tasted better. I had always said “you get what you pay for,” and in this case, the saying is most appropriate. Overall, we were impressed with our meals from start to finish.

The big surprise came at the end of our meal when our serving team came over to the table with a hot fudge sundae, complimentary for Nick’s birthday. I thought I could not take another bite, but ice cream is my weakness, and the next thing I know, half of that sundae disappeared.

After dinner, we were invited to walk around the restaurant, and visit the bars outside and upstairs. The bar upstairs really captured my attention, it was very quaint, and could imagine hanging out up there with friends on some occasion.

As their website advertises, The Bygone invites you to take a step back into the roaring glamor days. The restaurant does offer a unique menu, breathtaking views, and a warm and luxurious ambiance. While a meal for two could quickly become quite expensive, for a special occasion, The Bygone is the perfect place!