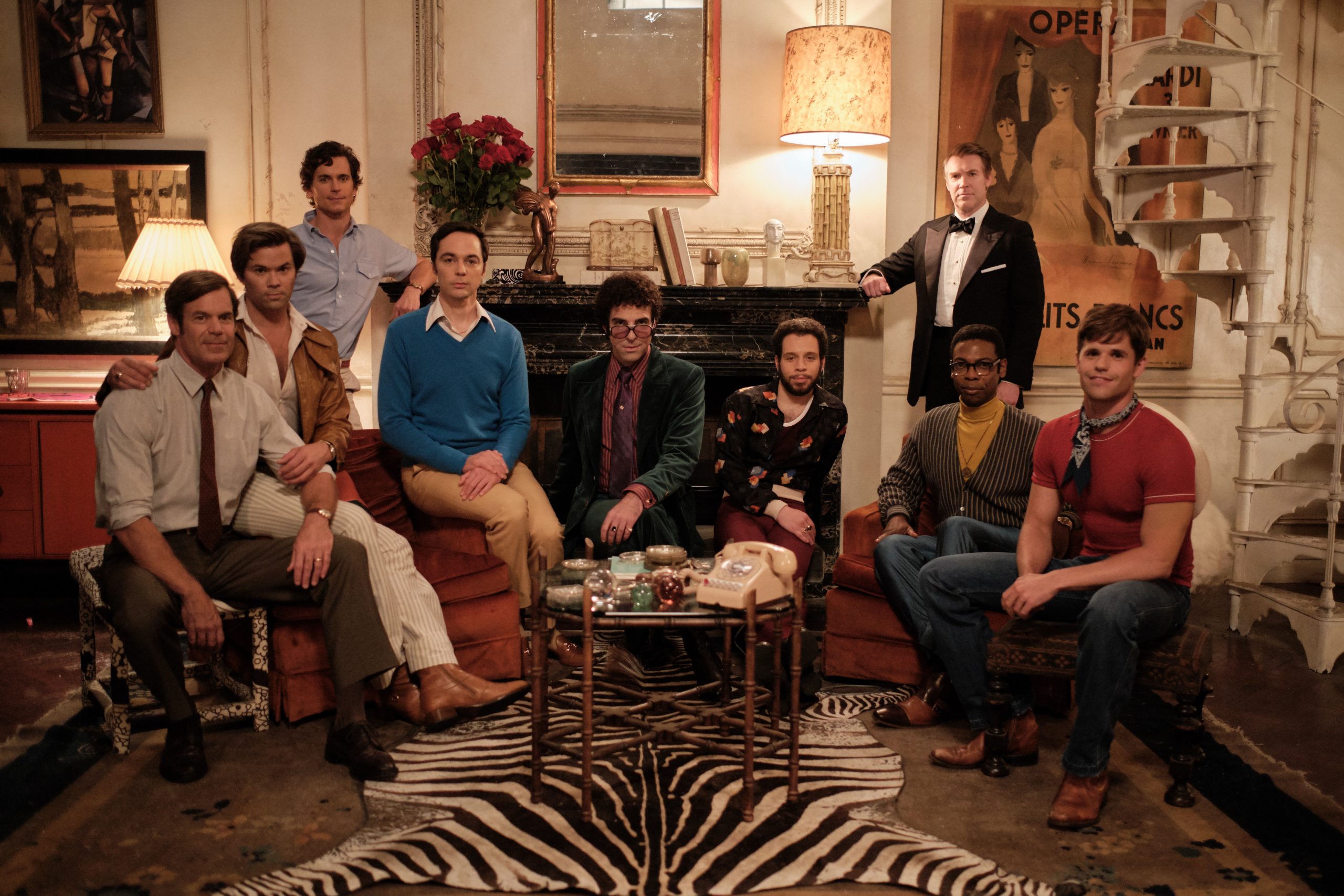 When Mart Crowley’s The Boys in the Band made its Broadway debut 52 years ago, the world was a very different place, especially for the LGBTQI community … which wasn’t even referred to as the LGBTQI community at the time because in many places being homosexual was still illegal in 1968. When The Boys in the Band opened on Broadway, the Stonewall was just a bar, not an iconic location where the gay rights movement began. So it’s risky mounting this relic of the past again today, on stage (as it was for the 50th anniversary) or on film (with the revival cast intact).

The story is simple: a group of friends, all gay men of various ‘types’ (i.e. stereotypes), gather at the apartment of Michael (Jim Parsons) for the birthday of Harold (Zachary Quinto). The attendees include basket case Donald (Matt Bomer), promiscuous Larry (Andrew Rannells) and his straight-acting and straight-laced partner Hank (Tuc Watkins), flighty queen Emory (Tony nominee Robin de Jesús), and Bernard (Michael Benjamin Washington), who can throw shade but has some deep-seated issues. Two others join the party as well: Cowboy (Charlie Carver), a birthday present for Harold from Emory, and Alan (Brian Hutchison), Michael’s straight college roommate who calls out of the blue in an emotional state and asks to see Michael, before asking Michael to forget about the call and they can meet up the next day. But then he still shows up, which throws Michael into a panic, knowing closet doors will be flung open.

The party begins amicably enough as each of the guests arrive and toss some catty dialog at each other but without malice. But everyone knows everyone else too well, and as the night wears on as they await for the very tardy arrival of the guest of honor, and imbibe in a bit too much alcohol, the claws begin to come out, a lot of the vitriol directed at Larry and Hank (often from Larry and Hank themselves) and Emory, whose flamboyance really seems to rub everyone the wrong way. The first monkeywrench to the evening is the too early arrival of the pretty-but-dumb Cowboy. His arrival is followed by the surprise of Alan, which sends Michael into a tailspin as he tries to get his guests to ‘butch it up’, something Emory absolutely cannot do and suffers the consequences from the tightly wound Alan. Once Harold arrives, the worst in everyone comes out, culminating in a horrific telephone game instigated by Michael in which each of his guests must call the one person they have truly loved which brings with it a lot of emotional trauma.

Seen through a lens from 1968, the play was certainly a way to give curious straight audiences a chance to head to the theatre to see ‘the gay play’ and be hit by the reality of the world gay men had to survive in, one in which they had to hide who they were from the public at large, sometimes even from themselves, dealing with the self-loathing that often comes with living in a world where you fear for your very existence on a daily basis. Seen today, audiences may get a lot of mixed messages. Yes, pre-Stonewall was a bad time for gay men and women who had to live their lives in the closet. But the show today also serves to reinforce the worst of gay stereotypes that straight people have, especially the Emory character. The 1968 play was groundbreaking, but today you can almost see the same thing on an episode of RuPaul’s Drag Race: Untucked. But, the production itself is also important in that it shows people today that there was a time when LGBTQI people did not have the freedom or the rights they seem to take for granted today. It’s always important to know our history so we are not doomed to repeat it (and there are some in today’s political culture who would love to see us revert to a time like this even among the LGBTQI community).

The film is very nicely directed by Joe Mantello (unjustly overlooked for an Emmy nomination for his brilliant performance in Ryan Murphy’s Hollywood), who also directed the revival, keeping the movie from feeling like a filmed version of the stage play (a fate which befell the 1970 film version). The play is opened up for the film a bit with an opening montage of the characters going about their day before the party, as well as some flashbacks to illustrate the stories told during the phone game. As a film, it all works very well.

The film also benefits from the performances from the cast, all reprising their roles from the stage. Parons’ Michael seems like the person who will ground the evening’s proceedings, keeping things on an even keel but he completely falls apart once Alan arrives and the booze begins flowing, actually becoming the movie’s villain. It’s a delicate tightrope that Parsons has to walk and he does it brilliantly, especially as Michael becomes more inebriated and vicious but without being obviously drunk. All of his mannerisms are carefully modulated which makes the turn in his character all the more horrifying.

Bomer’s Donald is probably the least fleshed out character, arriving at Michael’s completely neurotic about … something, which is never really explained, and somehow ends up becoming the caretaker for the group and their hurt feelings. It’s a character arc that doesn’t make much sense. Rannells starts off as probably the most unlikable character due to his treatment of his partner Hank. Watkins has to take the belittling behavior but ultimately becomes the one person to show Alan any compassion, but that’s only because he and Alan bonded over their similar lives (Hank is married with children but in the process of a divorce). Of course that changes once Alan is finally hit with the reality that Hank and Larry aren’t just roommates. Hutchison’s Alan is basically a plot device. His performance is fine but the character is only introduced to cause issues for the others. It’s never explained why he calls Michael in the first place, why he was crying on the phone and asking to pop by for a drink, so that is left up to the viewer to decide (there is a bit of dialog to suggest marital issues instead of a coming out crisis). Carver doesn’t have too much to do but be pretty but dumb, often the butt of the more degrading jokes about his intelligence. Quinto’s Harold is an almost more sinister version of his Charlie Manx character from NOS4A2 (he even does the old Charlie voice at one point when he takes a hit of a joint). Harold is there to instigate but ends up pushing all of Michael’s buttons, who pushes back, and to demonstrate that they are two sides of the same coin. He certainly seems to relish the role.

The two who garner the most sympathy are Emory and Bernard. Emory is the comic relief, to a point, and de Jesús really brings Emory to life. He is the life of the party, he is funny, he is flighty, and his mouth gets him into trouble with Alan, and you really feel for him. His turn playing the phone game also gives de Jesús a chance to really lay bare Emory’s heart and it’s easy to see why he was nominated for the Tony. Washington also makes an impact, not at first but as the evening wears on, railing against the racism on display from all of his white friends (and the Hispanic Emory whom Bernard allows to, as Michael puts it, ‘Uncle Tom him’ and then gets a very sincere apology from Emory) and then having a very deep emotional reaction to his turn playing the phone game that sends him into a tailspin. Both de Jesús and Washington are stand-outs in the film.

The Boys in the Band has gotten a film version that it deserves courtesy of Ryan Murphy, warts and all. How viewers react to it may be enlightening or problematic. Will people today see a piece of history that shows what gay men lived through pre-Stonewall and pre-AIDS and appreciate the strides that have been made, or will they see a collection of the worst stereotypes? That remains to be seen.