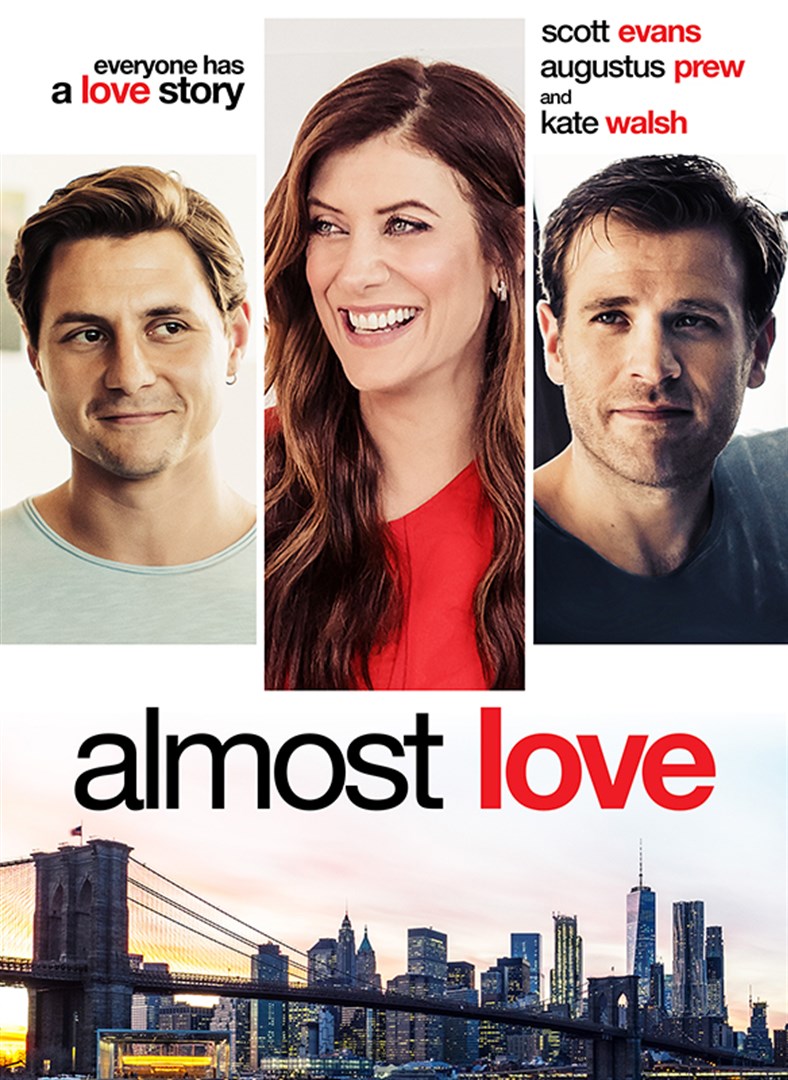 When gay actor turned writer/director Mike Doyle’s feature-length debut played the festival circuit it went by the terrible title “Sell By”. Opening in theaters this spring, the movie is now called “Almost Love” (Vertical Entertainment), which we can all agree is also very bad. Thankfully, the movie itself is so much better than either of its names.

Adam (out actor Scott Evans, younger brother of Chris) is a painter in New York. He (barely) makes a living (by NYC standards) producing paintings for famous artist Ravella Brewer (Patricia Clarkson) whose signature at the bottom of each piece brings in an average of $100k. Adam also makes a little money on a house upstate that he inherited when his mother died, renting it out as an Airbnb.

Adam and his boyfriend Marklin (out actor Augustus Prew) have been together for five years. Marklin is a popular blogger/influencer whose The Detailist website has made him a financial success. In their circle of friends, Adam and Marklin are considered to have the most stable relationship despite regularly seeing a couples’ counselor, and Adam’s hesitance to get married.

Cammy (the wonderful Michelle Buteau), who has “dates with an endless parade of cautionary tales” is maintaining her record with her latest beau, Henry (Colin Donnell), who reveals to her that he is homeless. Haley (Zoe Chao), a tutor, is on the brink of sleeping with Scott James (Christopher Gray), one of her underage students. Elizabeth (Kate Walsh) and Damon (Chaz Lamar Shepherd) had been together for 15 years, but Elizabeth’s aversion to having kids puts their relationship in jeopardy.

Before long, the cracks in the characters foundations begin to show. Adam’s resistance to marrying Marklin has to do with his insecurity about making less money than him, a fact that doesn’t matter in the least to Marklin. Scott James’ romantic pursuit of Haley puts her in an awkward position, especially since he didn’t get accepted to Brown University, insisting on sending in the college essay he wrote, instead of the carefully crafted one with which Haley helped him. Damon cheats on Elizabeth with a younger woman in the prime of her childbearing years.

In addition to all of this, Marklin has been visiting his ex-lover Karl (Chris Henry Coffey) in the hospital where he is in the end stages of an unnamed terminal illness. When this last, and perhaps most complex, secret is revealed to Adam, the future of his relationship with Marklin nears the breaking point.

Ensemble pieces, even one as intimate as “Almost Love”, are a risky proposition, but Doyle handles each of the four couples’ stories with grace and sensitivity. He strikes a near-perfect balance between comedy and drama. Fortunately for Doyle, the cast is more than up to the task with outstanding performances by Evans, Prew, Buteau and Chao. Even the few minutes that Clarkson appears on screen are unforgettable. Additionally, the (unintentional?) nods to a classic gay movie such as “Parting Glances” (the tearful confession about loving an ex more than a current lover and the cathartic breaking of fragile items) also give “Almost Love” a boost above other similarly structured offerings.