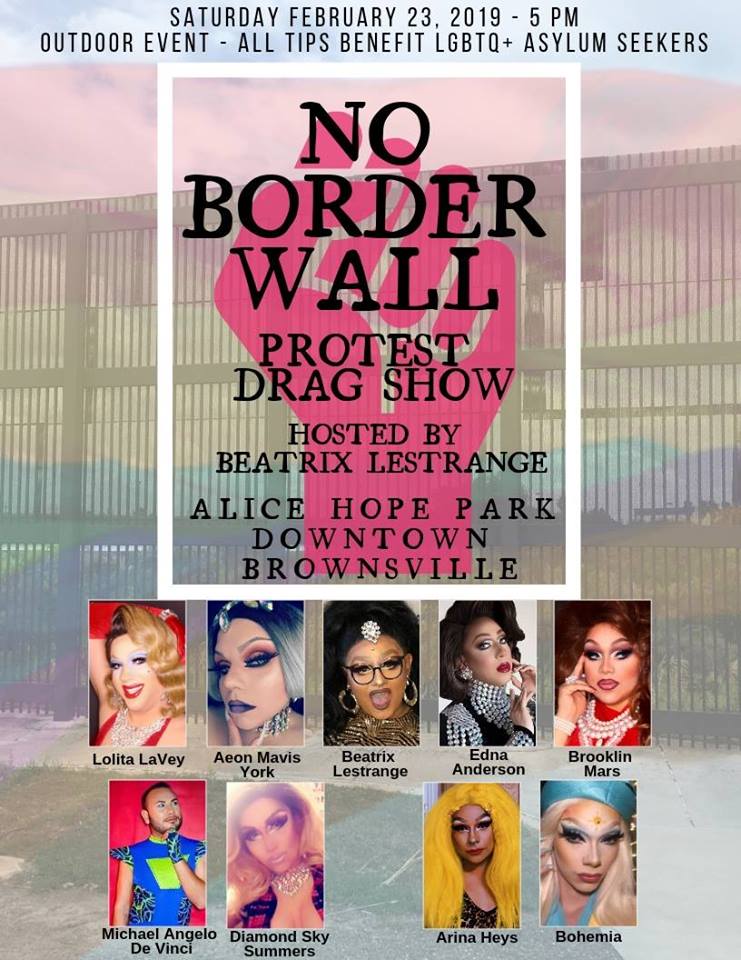 Brownsville, Texas – Drag queens from Brownsville, McAllen, and Harlingen staged a No Border Wall protest drag show on Saturday, February 23rd and raised money for LGBT asylum seekers being held in custody. The outdoor event took place in Brownsville at Alice Wilson Hope Park, and was hosted by Beatrix Lestrange, a Brownsville drag queen and activist, who said she selected Hope Park as the location because of its proximity to the border fence.

Some of the Rio Grande Valley’s best drag talent protested the fake border crisis Trump created and call attention to the mistreatment of LGBT asylum seekers being held in custody. “Ultimately our goal was to use the beauty of drag, art, and performance against the hateful, racist, and xenophobic rhetoric that is being projected unto our communities,” organizers wrote on Facebook. Lestrange noted the case of Camila Díaz Córdova, a transgender woman from El Salvador who traveled to the US seeking asylum. She was deported last year and died February 3rd of injuries following an attack, the Washington Blade reported.

Brownsville drag queen Aeon Mavis York was among the performers at Hope Park and said she got onboard as soon as Lestrange put out a call for entertainers to participate. All tips collected during the performances were donated to help LGBT asylum seekers and detainees. (Dallas Voice – David Taffet at Dallasvoice.com/rgv-drag-queens-to-stage-protest-drag-show/ and the Brownsville Herald – Nadia Tamez-Robledo at Brownsvilleherald.com/news/local/drag-queens-to-hold-border-wall-protest-at-hope-park/article_42e222bc-36b7-11e9-9fff-afecd0f63542.html)