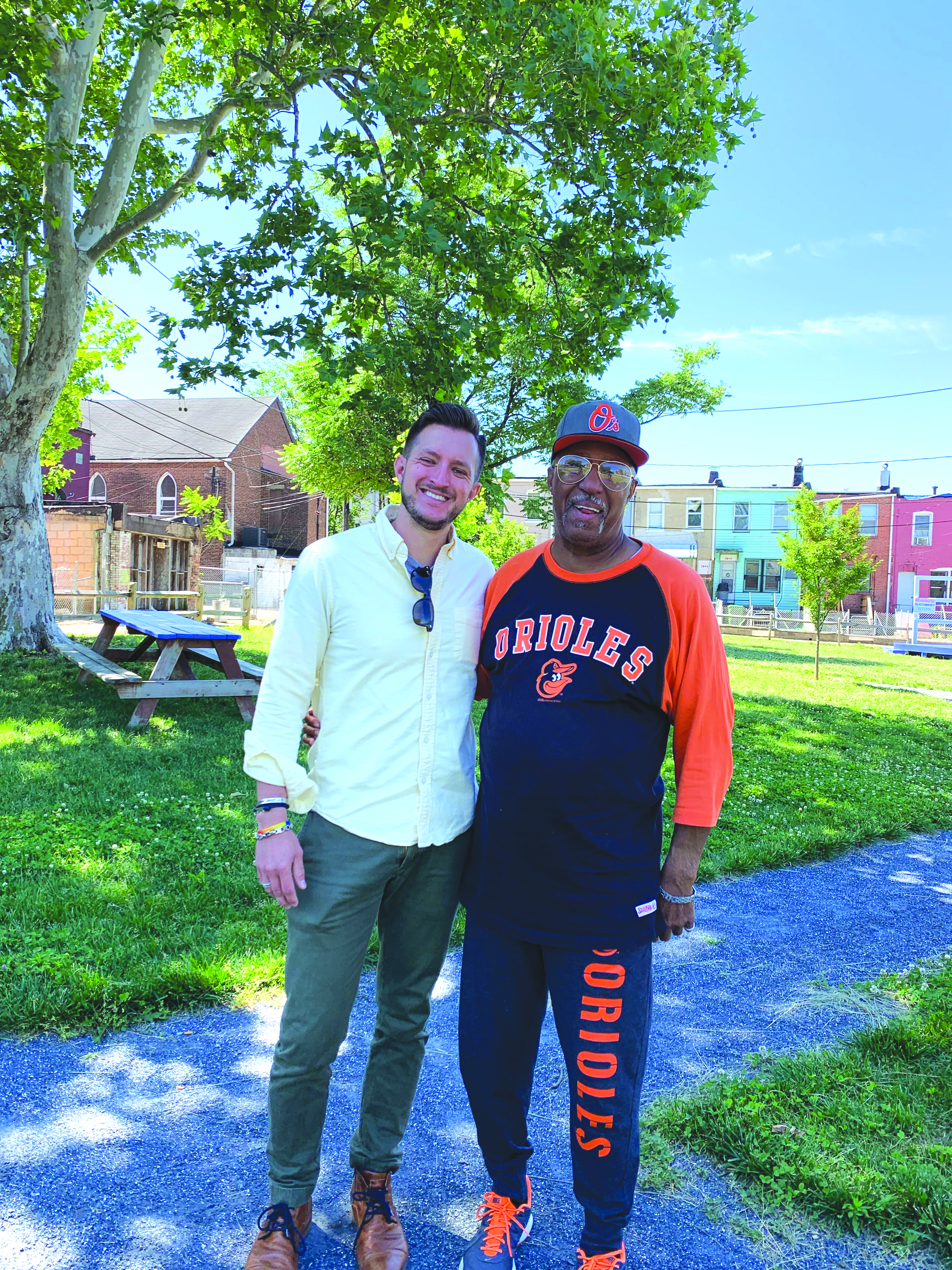 Coretta Scott King once said, “The greatness of a community is most accurately measured by the compassionate actions of its members.” For Parks & People’s Steven Preston and community leader Marvin L. “Doc” Cheatham, Sr., compassion for the community is rooted in their DNA. Preston and Cheatham recently chatted with Baltimore OUTloud regarding their collaboration on the “Miracle on McKean” – the Easterwood / Sandtown park and playground and their enduring friendship that has grown from the project.

For Steve Preston, parks construction and design manager for the Parks & People Foundation, the word “community” isn’t isolated to a single group. “For me, it’s a group of folks who have likeminded views, goals, and heart. They have the passion and drive to move something forward.” Preston, who lives in the Patterson Park community, doesn’t feel that where you live solely should determine which community you should feel part of. “People say that Patterson Park is my community because I live there, but I feel that every community I touch becomes part of my community. We all have the same passion in moving green spaces forward in all of our communities.”

Born and raised in Harford County, Preston’s background as a licensed landscape architect grew from his passion for the outdoors, connecting people and improving physical environments and aesthetics through design. “This year marks ten years since I moved to Baltimore. I was drawn to Baltimore since I grew up in the county and saw Baltimore as this ‘jewel in the rough’ and a place that was overlooked. I moved there because I thought I could and wanted to make a positive change after seeing years of people turning their backs on the city.”

After joining Parks & People about five years ago, Preston had been part of dozens of projects around Baltimore, involving both existing parks and new ones. It was in the process of creating a new park that Preston was introduced to Cheatham. Baltimore-native Cheatham is the president of the Matthew Henson Neighborhood Association, as well as CEO of the non-profit Matthew Henson Community Development Corporation. Cheatham’s community leadership and service speaks for itself throughout Baltimore City.

“Community to me,” Cheatham began, “if I had to put it in one word, would be ‘family.’ Community has a connotation of dealing with neighborhoods and people living together, but at the end of the day it equates to something bigger. You must act and communicate as a family. You do things on behalf of the community because you think of them as family. If we take unity to the next level – we think family. Most of us should be conducting ourselves as a family – even with the differences we have.”

Preston continued, “Parks & People was invited into the community, and I heard ‘Doc’ [Cheatham] speak about his desire to do something positive in his community. Our former CEO pulled me in and said, ‘Why don’t we go meet him?’.” Preston added, “I vividly remember that we met on October 5th, 2016 – my birthday – and we went to a site with ‘Doc’ and he told me exactly what he wanted. He laid it out that these series of vacant lots had been neglected for decades, a few still with vacant houses. He said he really wanted a space that would rally the community, a stage for performances, cherry blossoms to highlight the beauty of spring, a space for kids – and adults, chess tables, etc. A week later I came back with a sketch and he loved it.”

“Steve and I began working together on this as a result of the Freddy Gray riots,” Cheatham says. “My neighborhood was hit hard – we are the Matthew Henson Easterwood community, and even the elected officials that were supposed to represent us during the riots didn’t know where it is. We thought, how can we help our residents? We lived in a ‘food desert’ where we had no place to buy anything. Even small things like toilet paper and food. I kept having these dreams about building a park where there were boarded-up houses. I shared my ideas and dreams with the governor, the lieutenant governor, and their people. I had no expertise in writing it up, and I reached out to Parks & People and they gave me my ‘brother from another mother’ – Steve Preston.”

It was exactly six months from the day the sketch was finalized that the park opened in April 2017. Preston explained, “It really became a celebration point for that neighborhood. It was hit very hard from the Freddy Gray uprising, and it got a lot of negative press, which Baltimore often gets. But this was really a rallying point for a great neighborhood that’s often overlooked.” Preston added, “Projects, like the one I did with ‘Doc’ are the kinds of projects that really impact people’s lives. It truly focused on community engagement and focused on changing the community from the inside-out and not the outside-in.”

Cheatham summed how the work of he and Preston helped to ripple throughout the community for positive change. “We are all going to have different experiences and differences – not just by color, gender, and all those things. We have to find ways to work together, and I think that’s what important. That’s how Steve and I bonded – we are different individuals and from different communities. But we found it imperative that we have to work together and find ways to help other people – folks of all ethnicities came to both of us. Steven was the expert and I’m the community member and together we created this positive environment.” Cheatham added that people from Maryland and all over have come to see what was created with this park. “People always ask, ‘How did you do this?’ and I have to give credit where credit is due. I always sing the praises of Parks & People, but most importantly, my friend, Steven Preston. It’s been an honor to continue to work with him. At the end of the day multiple communities are benefit from his and my friendship.”