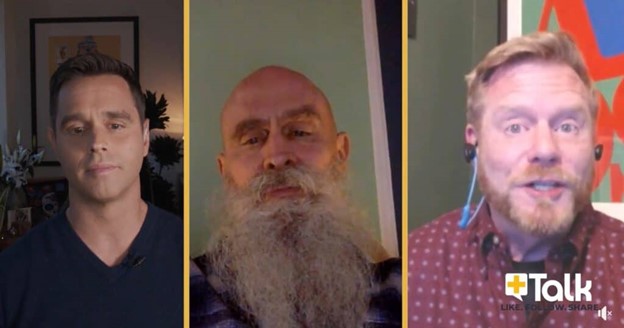 Karl Schmid, the plucky television broadcaster who revealed he is living with HIV in 2018, has been putting his notoriety and adorable Auusie accent to excellent use since his courageous announcement. Schmid has created Plus Life, a series of social media posts and interviews that work to “turn positive into a plus,” as his catchphrase pronounces.

Recently, Schmid’s +Talk series turned its attention to the state of the COVID vaccine and whether or not people living with HIV should qualify for early vaccination. By bringing together the monumental HIV vaccine expert Jeff Taylor and myself, Schmid might have been secretly hoping for fireworks, since Taylor is a huge proponent for getting the vaccine, and I have written about not wanting to be perceived as “ill” or “vulnerable” simply by virtue of my HIV status.

Our fast-moving conversation is lively and my regard for Jeff Taylor is pretty clear. I’ll do whatever the guy says. Still, there is some great information in this quick interview that makes it worth a look.

You don’t have to be a television celebrity to find your platform, though. In central Pennsylvania, Wes Chicko has begun season two of his podcast, “Hey, Remember Us?” The series allows people living with HIV “to tell stories about what it’s like to live with a stigmatized illness that no one really talks about anymore.”

I stopped in for Chicko’s most recent episode, and we discussed life as a long-term survivor, how our stories have changed, and why it does not bother me that younger people today are less alarmed about HIV.

It appears we have a few more months of indoor living, which just might present an opportunity for you to find a platform that works for you. Chronicling our history means chronicling our lives, and yours is as important as anyone else. Do not let this precious history slip away without being recorded.