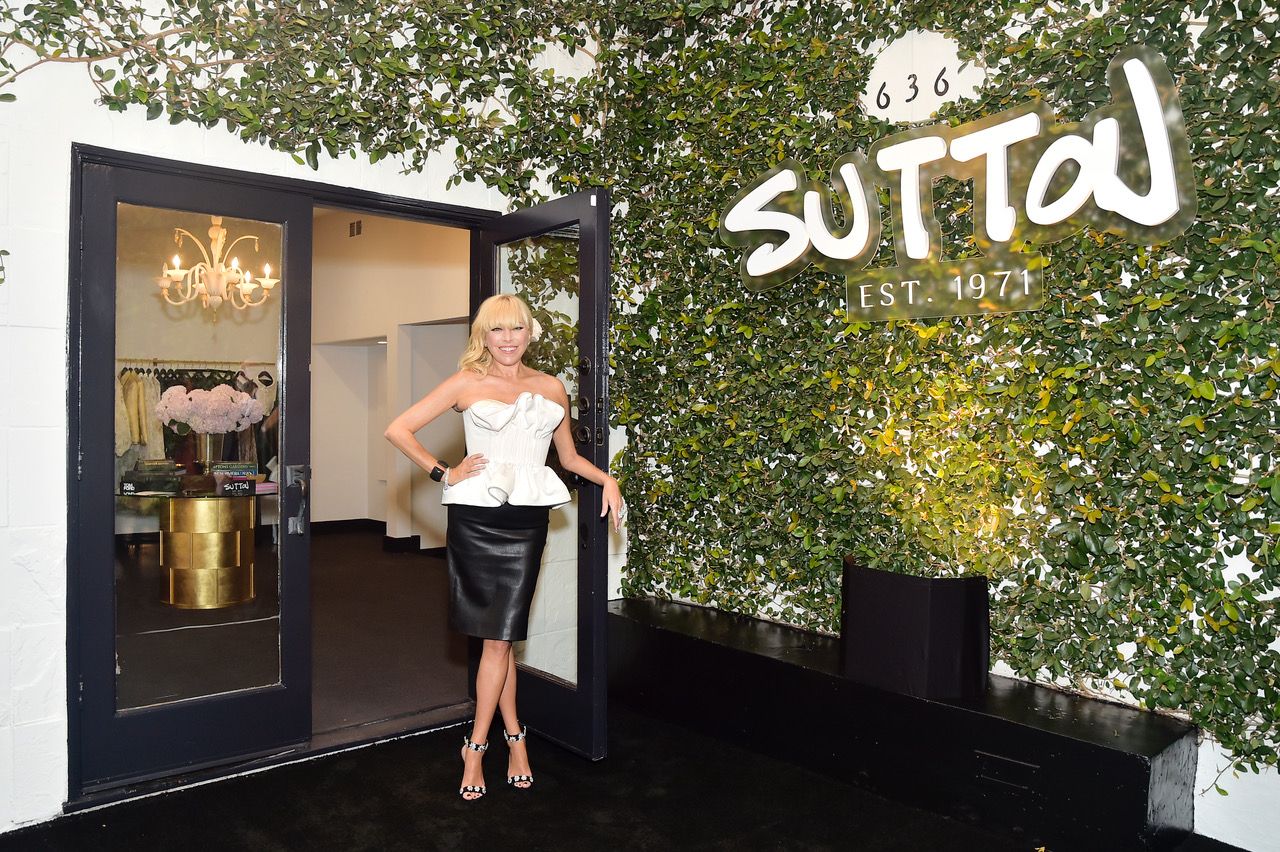 Southern Debutante-turned Beverly Hills socialite, Sutton Stracke is one of the newest cast members of this current season of The Real Housewives of Beverly Hills.  Sparkling with charm, style and utter sophistication, Stracke has garnered much popularity with viewers for her candid wit and social grace.  Baltimore OUTloud was thrilled to chat with Stracke regarding her commitment as an LGBTQ ally, her background in the arts, and the importance on giving back through philanthropic endeavors.

“Well, hi Frankie! How are you in Baltimore? Did y’all miss the hurricane?” inquired the delightful Stracke.  Chatting with Baltimore OUTloud a few days after Hurricane Isaias blew up the East Coast, Stracke’s warm personality permeated through the phone.  It was evident from the beginning of the conversation that, like a well-polished diamond, Stracke’s congenial demeanor and caring heart glitters to all who meet her.

Born in Columbia, SC, Sutton was raised in Augusta, GA by her architect father, psychotherapist mother and one brother.  Both sides of Sutton’s family hail from the South since the late 1600’s.  Growing up, Sutton attended the John S. Davidson Fine Arts High School and then Converse College in Spartanburg, SC. Working as a dancer, and dance teacher after graduation, Stracke worked for the Augusta Ballet and then the North Carolina Dance Theatre in Charlotte, NC where she was a choreographer, winning Best Young Choreographer in 1995.  Stracke eventually moved to New York City where she worked for Merce Cunningham Dance Company as Studio Manager before becoming the Director of Development.  From there, she moved back to Augusta to become Executive Director of the Augusta Ballet Company.

“I was a dancer since I was 6 years-old,” began Stracke.  “Without the arts, I think we’d have a really, really sad, gray life.”  Stracke’s appreciation of the arts runs very deep in her DNA.  “The arts bring color.  It brings imagination.  It brings hope.  So, for me, it’s everything!  I teach my kids (Porter, Phillip and James) that, as well.  They play the piano. We love to do karaoke.  We’ll draw. I’m not a painter, but I bought us all paint sets.  I said, ‘Let’s just go outside and figure out how to paint something.’  It gets your mind off things, especially right now during this pandemic. It can be very spiritual almost in a way.  It doesn’t matter if you’re painting, if you’re dancing, if you’re singing or if you’re playing an instrument.  It removes yourself from this really earthly world and takes you to a different place.”

“I’m going to go off for a second,” Stracke apologized as her advocacy for the arts continued to shine.  “[The arts] are also very important for kids.  Especially kids, because sometimes they can’t express what they want to say through their voice.  So, if they have an alternative way to communicate, it’s amazing. I would go insane if I didn’t have any arts around me.”

Stracke’s love of dance and the arts continues through her work on several philanthropic endeavors.  Among the many memberships and boards Stracke sits on, highlights include the Museum of Contemporary Art in Los Angeles, the Augusta Ballet in Georgia, The American Ballet Theatre and Friends of the Costume Institute for the Met Museum in New York City.  As a member of many of these philanthropic endeavors, Stracke feels it’s very important for her to give back to the community.  “Well, I think even before serious wealth came into my life, I was always giving back.  Whether it was volunteering for a friend’s art show, or anything like that.  I found it very important to support other artists, as well.”

Though she truly does not like talking about money, Stracke explained that it was very important for those with wealth to give back, and that with great wealth comes great responsibility. “I think responsibility is a good word for it.  I think when you have a lot it’s important to give back even more.  I’m constantly asking friends for money to give to charities.” Stracke added with a laugh, “They run when they see me, I think.  But I do think it’s our responsibility.”

Stracke went on to stress that anyone can give back, no matter the size of the contribution.  “Even if it’s hundred dollars that you gave that year to your local theatre company; that’s a big difference for them.  I think it’s important to give so that people can still create and still make a beautiful world.” Stracke added, “Money or time.  That’s how it began, for me, through volunteering.  If it was one of my arts friends who was doing a gallery opening, I would help.  Or if it was working backstage and doing prop stuff or working in the box office.  I think there are lots of ways to give, so you have to find the way that suits you best and do it!”

Stracke’s affinity for the arts eventually fueled her love of fashion. “My love for fashion definitely comes from my growing up in the ballet world.  We were constantly in costume fittings in some of the most beautiful intricate costumes. We were wearing tiaras, and just the fantasy of that stuck with me. I really appreciate the artistry that goes into it.  When you’re a dancer, you get to know the seamstress very well because they make everything fit.  And, I think one of the things that drew me to couture was that the clothes are so detailed, and the designers make everything so beautiful.  I think it’s just an artistry that I don’t want to see lost.”

Years of following fashion, attending couture fashion shows, befriending designers and writing a fashion blog inspired Stracke to open the SUTTON Concept Boutique in West Hollywood, California.  SUTTON offers clothing, furniture, art and decorative furniture showcasing Stracke’s many interests.  “I had this empty space for three years,” Stracke began. “And, it took me a lot of courage to [open SUTTON] because I’ve never owned a store before.  I’ve never been in retail before, but I love fashion and I love the visual arts.  I’m an art collector.  I love antiques, and I love various sundries.  So, I just wanted to put them all in one place together.”  Stracke beamed. “And it’s the perfect little spot. I’m obsessed with my store.  It’s so cool!  It’s sort of my home away from home. It’s really peaceful and quiet there.  But, when you come into the store, it’s more of an experience than just shopping.  So, I like to go there and experience it myself and look at the art and all the pieces we’ve collected.  You know, I travel a lot, so I have things from France, England and Italy in there. It’s just like this little piece of me that I finally got the nerve up to present to the public. You know you have to be brave to do something like that!”

A long-time LGBTQ ally, Stracke is very proud of her relationship with the LGBTQ community.  “You know, I think for me, I’ve been in the LGBTQ community since I was a little kid. I grew up in the dance world. So, when you’re a dancer and in the performing arts, it’s just normal.  So, to speak up and to be able to have a voice for my friends has been such an honor for me.  Also, I was growing up in the late eighties and early nineties when we saw a lot of our friends pass away from AIDS.  It opened my mind up as a teenager and young adult and has always stuck with me. I don’t like anyone to ever be persecuted on no matter what spectrum we’re talking about; so, this is just a natural thing for me.” Stracke added, I love that my store is in West Hollywood because that’s one of my favorite hangout spots in LA.  And to be a part of especially that community, which I think has been such a leader in LGBTQ rights and movements, is just another honor. I’m proud to serve that community in whatever way I can.”

Stracke discussed how excited she was to be part of the Real Housewives of Beverly Hills this past season and would love to join the ladies for the next season, as well.  “I would love to do [RHOBH] again. One, I think there’s a lot of unresolved things that I would like to see be resolved. And, two, I had the most fun challenge of my life, I think ever.  I would do anything to have that challenge again. It’s filled with emotions, and it’s such a great ride. It’s like getting on the scariest rollercoaster ride that you don’t want to get on, and then you get off and say, ‘Let’s do it again!’”