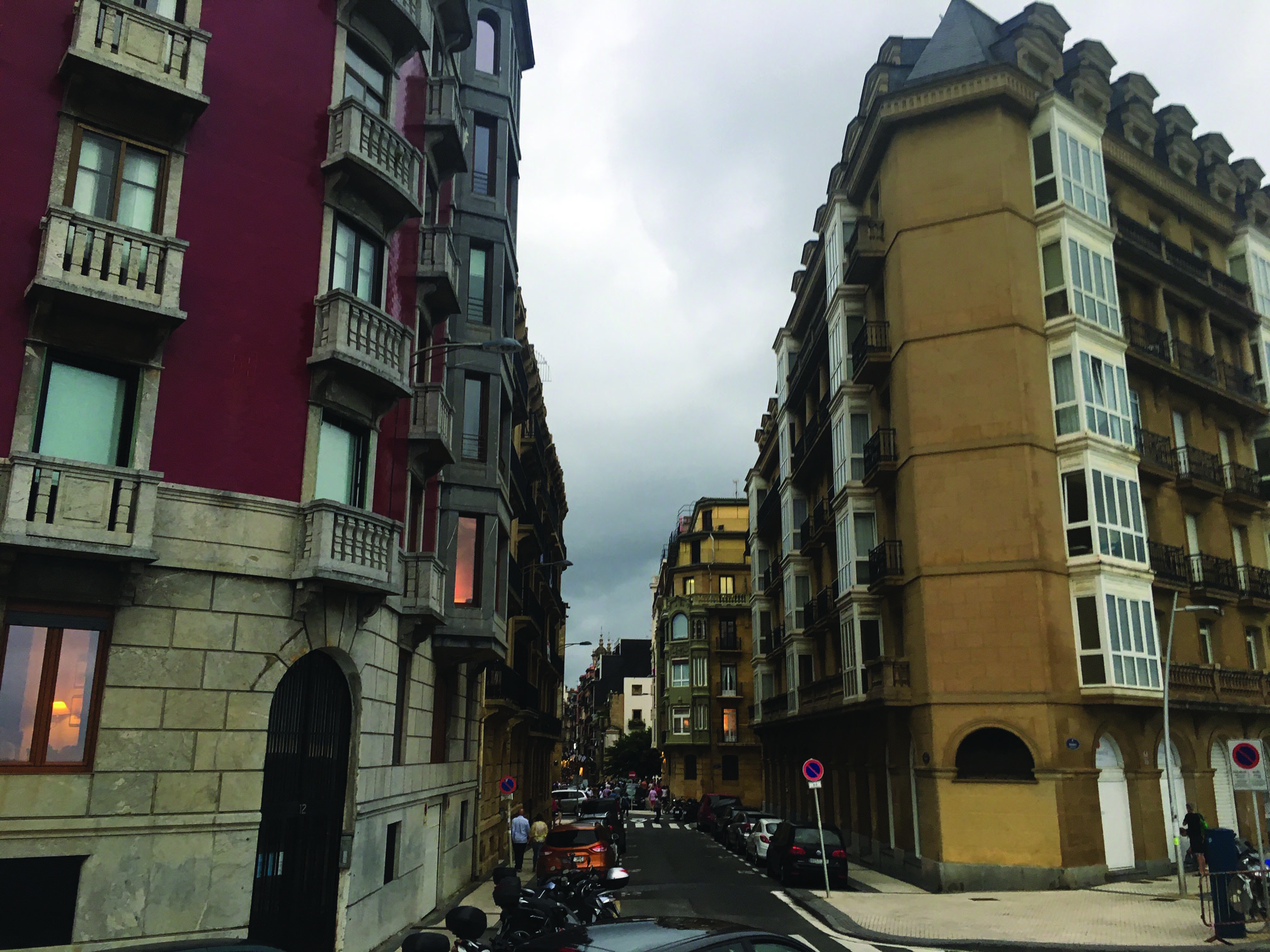 San Sebastian is one of Spain’s most beautiful coastal cities. It offers a rare combination of spectacular rolling green hills and beautiful ocean views. San Sebastian lies on the southern coast of the Bay of Biscay and it is only 12 miles from France. Its cooler weather, city design, and friendly atmosphere feels more like an old quiet city deep inside Europe as opposed to the hustle and bustle of a big city like Madrid or Barcelona. The cultural experiences are more on the order of bar hopping and eating pintxo (think tapas, but bigger) and craft-beer tasting rather than bullfighting, but the area still adheres to Spanish cultural norms of late-night dinners and siestas. It’s easy to get lost walking in the cobblestoned old town (Parte Vieja), because it seems like a maze filled with upscale shops, art galleries, and vibrant pintxo bars that serve local wine and bite-size regional specialties. 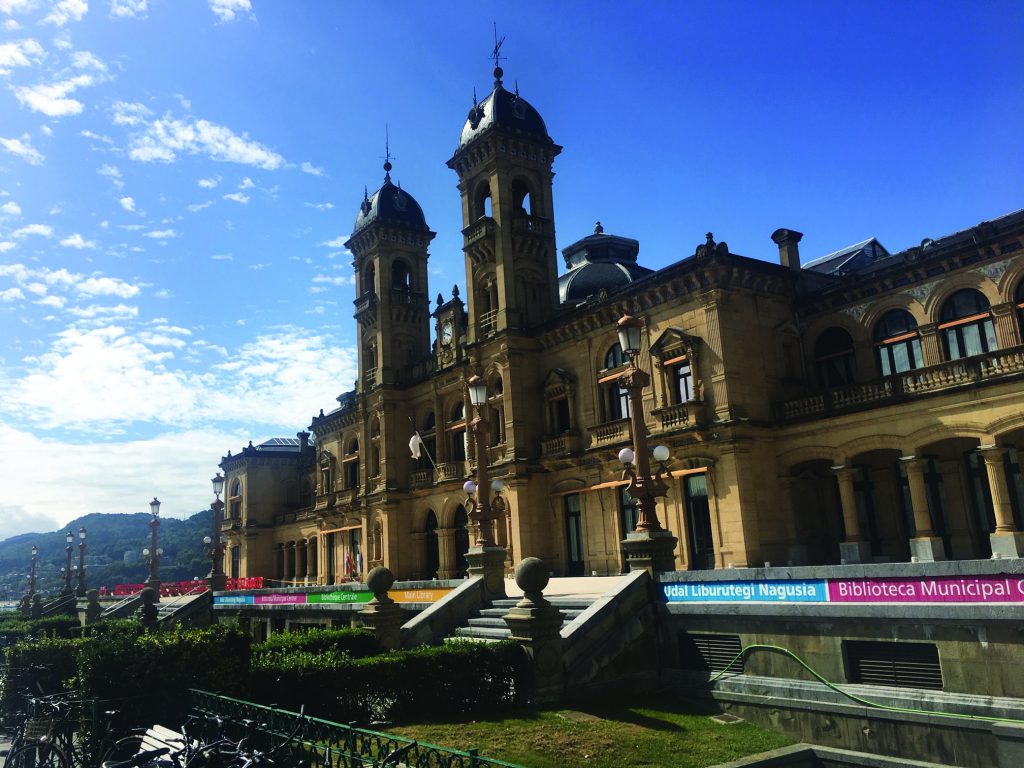 The area is named after Saint Sebastian. When the Romans were persecuting the Christians, Sebastian was tied to a tree and was nearly killed as arrows pierced his body. Saint Sebastian is shown in artworks as a near-naked youth, with six-pack abs wearing nothing but a loincloth shot with arrows. In 1996, Richard A. Kaye published Losing His Religion: Saint Sebastian as Contemporary Gay Martyr. He noted that “contemporary gay men have seen in Sebastian … a stunning advertisement for homosexual desire.” Sebastian’s sexuality is unknown as he followed a fundamental Christian life. But the artwork that depicts him has captured the imaginations of the gay men for centuries. 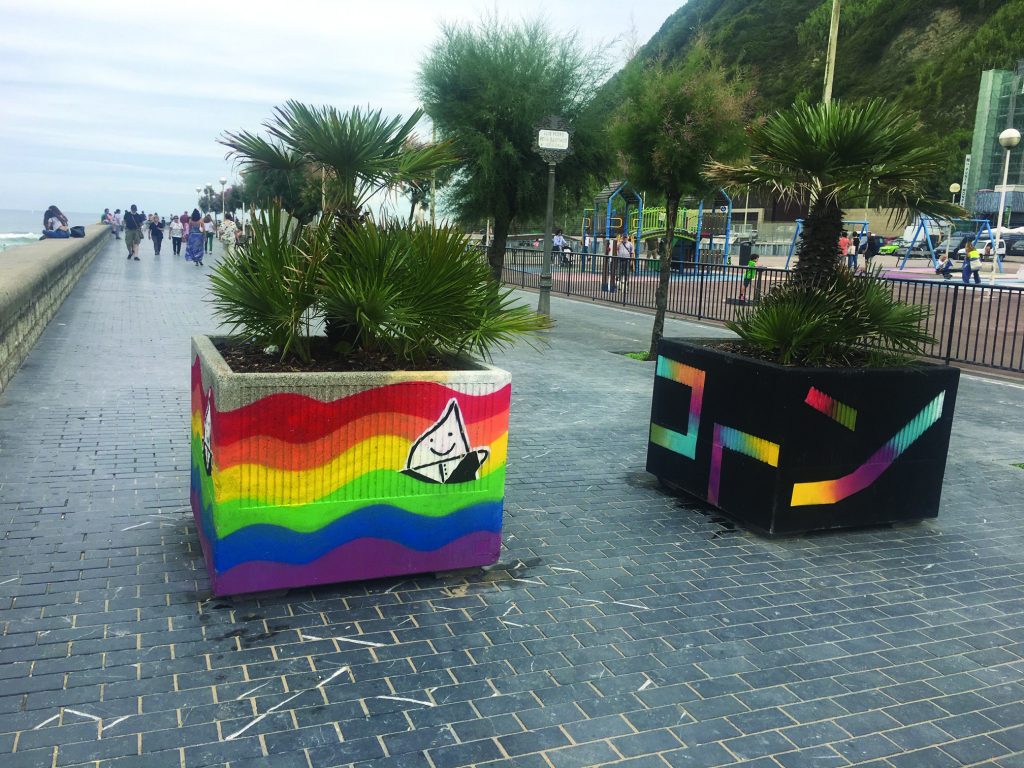 San Sebastian is built around a circular bay with beautiful white sands that separate the city’s historic structures from the water. Along the bay is a famous white wrought-iron promenade. It is a perfect walkway to stroll and munch on paper-thin slices of glistering tuna while enjoying the stunning architectural masterpieces such as the Ayuntamiento de San Sebastian. It is San Sebastian’s city hall and it was constructed between 1882 and 1887. Initially it was a casino, then closed after the ban on gambling in 1924. The building was used in battle during the Spanish Civil War (1936-1939). It still has bullet holes in its facade.

The San Sebastian Cathedral is known for its detailed design. Its Neo-Gothic style grabs the attention of both residents and visitors. The seven double windows of the apse have stained glass that depict the 12 apostles and the Sacred Hearts of Jesus and Mary. If exploring architecture isn’t your thing, maybe a ride on a wooden roller coaster on a mountain is. 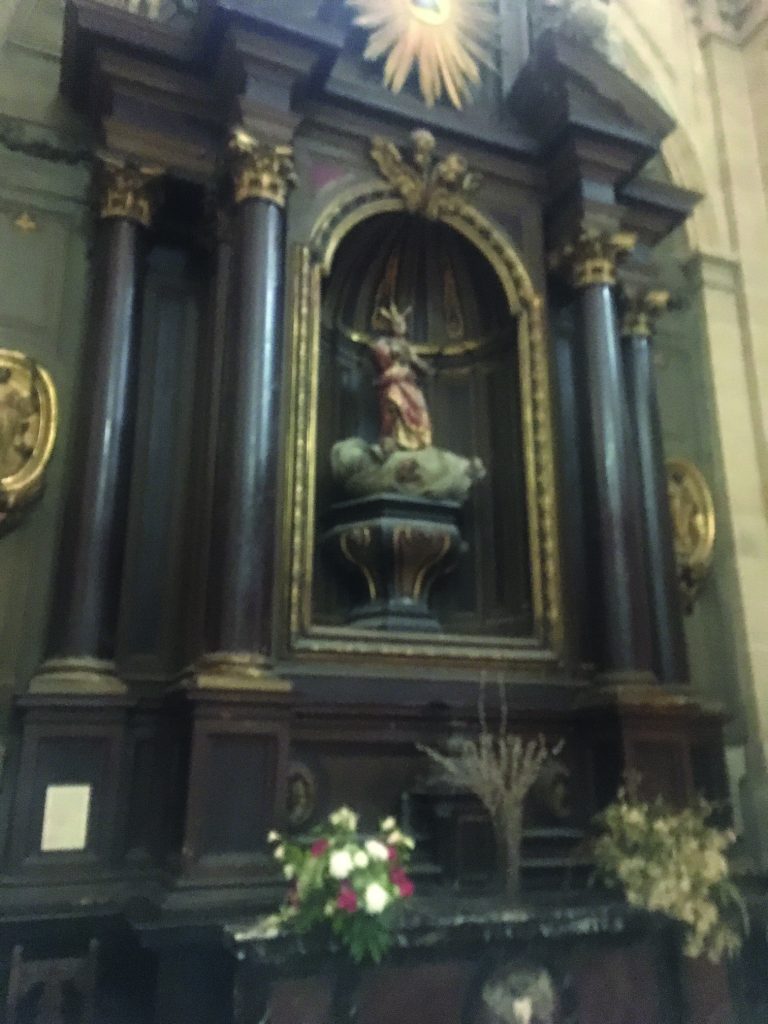 The 100-year-old igeldo funicular railway, with its wooden carriages, is a great way to travel up the side of a mountain to the famous and historic amusement park at Monte Igeldo. The vintage fairground has a haunted house, a water ride, and a wooden roller coaster. The top of the mountain offers breathtaking views of the city and coastline. It is the number one tourist spot to grab a picture of the area below.

San Sebastian has a world-famous foodie scene that is to die for. It doesn’t cost a fortune to sample pintxos. Pintxos infuse French culinary traditions – octopus, anchovies, tuna, ham, and anchovies on toasted bread. Although in other parts of Spain, tapas are served on a plate after order, pintxos are laid out in a batch on the bar and people just pick up what they want. Payment is based on an honor system: you tell the bartender how much you ate and pay that amount. Note of caution: If you don’t see the bartender put out the pintxos or you don’t know how long the food has sat out, don’t eat it. Pintxo bars usually have windows and doors that are left open, so bugs lurk around and may be found in the food. A safe choice is the taxkoli, a fruity white wine exclusively produced in the area. 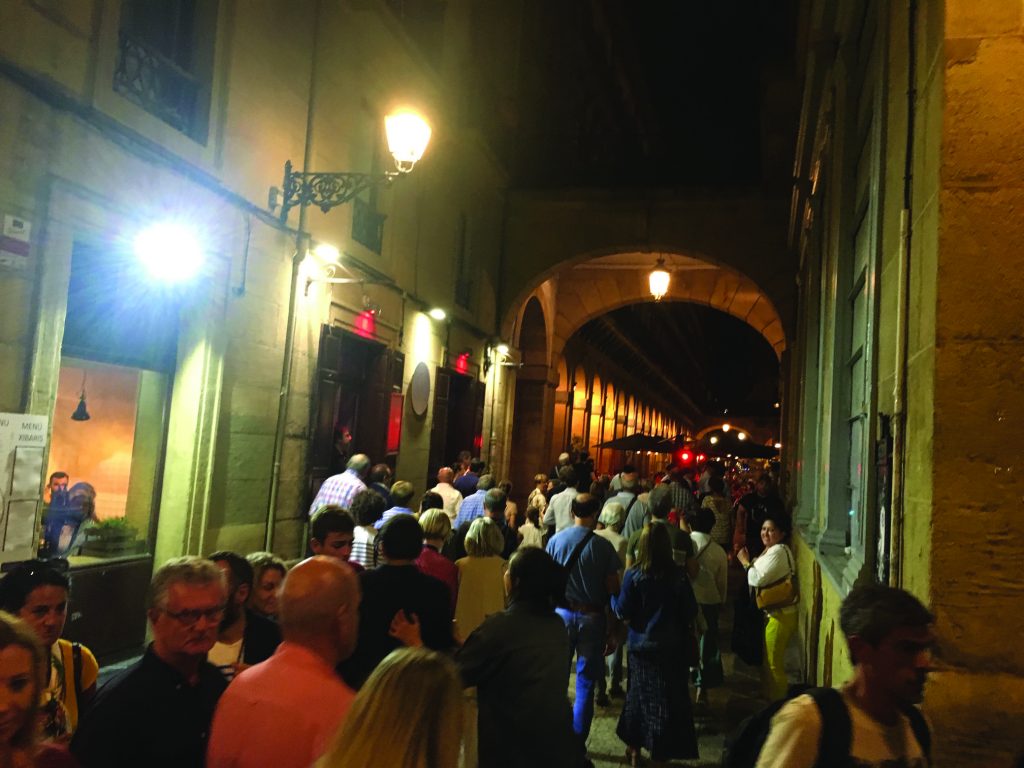 The nightlife is a mix. The streets are often filled with lively 20-somethings guzzling booze outside bars and enjoying the nightlife. There are gelato shops where older people seem to mingle.

There are nightclubs that offer electronica, soul, funk, and rock. Txirula is the main gay bar. Its music is mixed: dance, pop, soul, and house mix. It gets packed on weekends, but it is hit-or-miss on weeknights. Dionis is a glitzy gay-popular bar that offers a cozy environment for people to mingle.

So if you’re up for a Spanish adventure, but you want a laid-back environment, San Sebastian is the place. 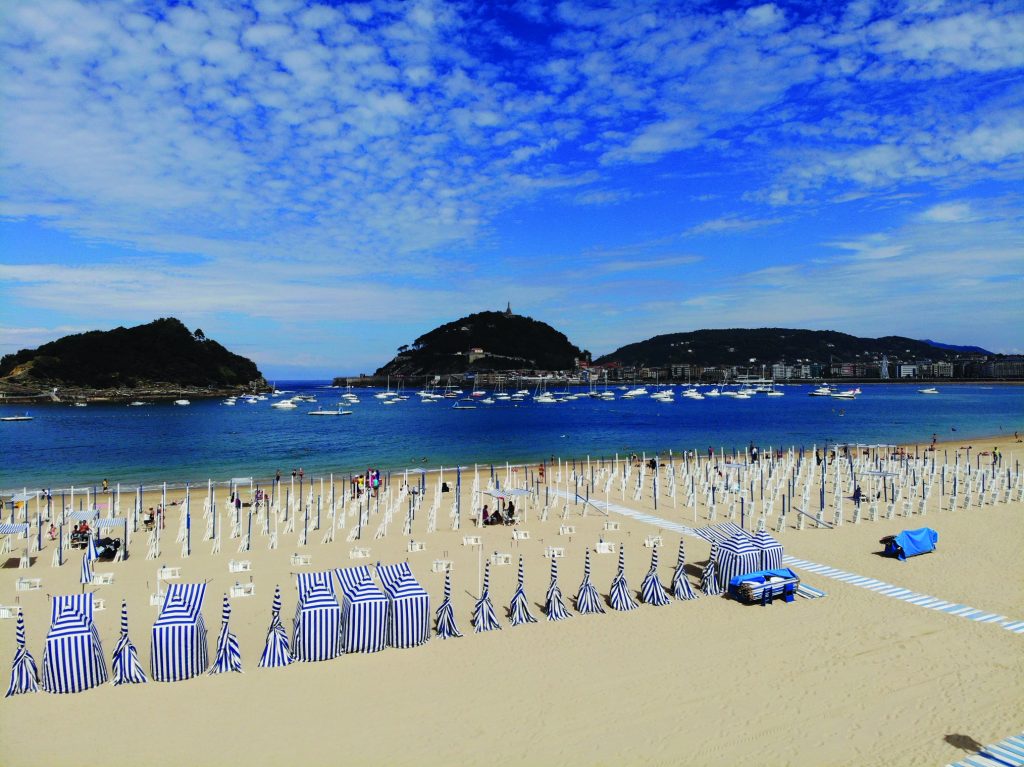