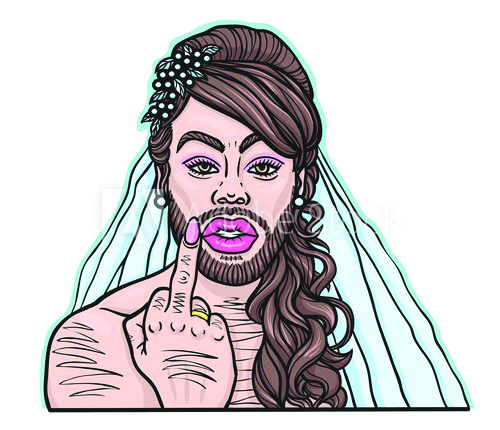 I’m a happily married bisexual woman in my late 40s and I consider myself to be very open-minded. My husband has always identified as heterosexual (while being very supportive of my bisexuality and my need for visibility), however recently he confided in me that he enjoys dressing up in women’s clothing. I have to claim ignorance here; he says it’s not an identity thing, but I’m inclined to believe that cross-dressing is a steppingstone to coming out as queer. Am I just experiencing wishful thinking here, wanting my husband to be a part of the LGBTQ community with me? Or is this a case of him refusing to come all the way out of the closet?

Let’s first begin with a quick overview of “sexual orientation” vs “gender identity” vs “fetish”. Sexual orientation refers to who you are attracted to (straight, gay, bisexual, queer). Gender identity refers to, well, which gender(s) you identify as (cisgender, transgender, non-binary, male, female, sea witch). A fetish is defined as being a form of sexual desire in which gratification is linked to an excessive degree to a particular object, item of clothing, part of the body, etc. The gratification in question could be explicitly sexual, but it could also mean that the individual engages in the fetish because it’s relaxing, validating, or seen as “an escape” from their everyday life.

Common examples of fetishes include preoccupations with feet, stockings, voyeurism, and bondage, although there are literally hundreds of others out there. When it comes to fetishes, LGBTQ people are no more inclined to harbor them than heterosexual folks are and vice versa. While fetishes can in some instances reflect and overlap with the sexual orientation and/or gender identity of the individual – including indicating when the person’s identity is in flux in some way – in many cases they’re not correlative.

Cross-dressing is a fetish that typically refers to heterosexual men who enjoy dressing up in women’s clothing. Unfortunately, there are a ton of common misconceptions about men who cross-dress floating around out there. Most commonly we see the man’s sexual orientation and/or gender identity called into question (e.g., “He must be gay!” “He obviously isn’t attracted to women,” “He’s definitely transgender.”). Sound familiar? In my opinion, these stereotypes are so pervasive because our culture has its own fetish with elevating, rewarding, and placing excessive value upon traditional masculinity. One of the most dangerous things you can do as a man is to embrace femininity in any way, lest your masculinity be interrogated, and the quality of your life subsequently threatened.

Additionally, because transgender women do sometimes cross-dress earlier in life as a “steppingstone” to coming into their authentic selves, we’re often quick to assume that all cross-dressers intend on doing the same. As a bisexual woman, think about the stigma often lobbed at those who identify as bi. Because so many gay men and lesbians use the label of “bisexual” early in their coming out process (often to provide a “softer” coming out to close friends and family who may disapprove), the legitimacy of bisexuality as its own stand-alone identity has always been under attack. If you can bring some of that perspective into the situation with your husband, you’ll be better equipped to understand him empathetically.

Here’s the thing about that whole conundrum: Whether our cross-dressing (or bisexual!) partners end up with static identities or whether those identities end up evolving into others, our responsibility is to accept them, validate them, and treat them with respect regardless. Believe it or not, this is an exciting opportunity for you and your husband. Challenge your assumptions and lean into whatever this new kinky epiphany has to offer you both!