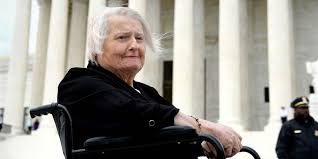 Detroit, MI – A federal judge formally approved a settlement in the case of Aimee Stephens, the Transgender funeral home employee whose lawsuit led to Supreme Court recognition of Trans rights in the workplace. Stephens died on May 12, 2020, but her estate won $130,000, including $63,724 in back pay with interest and $66,276 in damages. US District Judge Sean Cox approved the terms of the settlement between the estate and Stephens’ former employer, R.G. & G.R. Harris Funeral Homes, on November 30. In addition to paying a cash award to Stephens’ estate, Harris Funeral Homes is prohibited from firing any future employees on the basis of their gender identity. The consent decree also says the company, which operates three funeral homes in southeast Michigan, must pay another $120,000 to the ACLU Foundation for costs and plaintiff’s attorney fees. Harris Homes must also pay each of the women it employed since September 2012, when Stephens began her transition, a stipend equal to the average amount it gave to its male employees for clothing.

“We are pleased that all sides were able to come to an agreement regarding damages and attorney fees,” said Jay Kaplan, Stephens’ long-time attorney at the ACLU of Michigan. “The settlement of this case is bittersweet in that Aimee passed away before matters could be resolved.” Stephens was fired from her job as an embalmer and funeral home director at Harris’ location in Garden City in 2013 after six years on employment. The firing came immediately after she informed her boss, Thomas Rost, that she was transitioning from male to female and planned to start wearing appropriate women’s business attire to work.

In the Supreme Court case, a 6-to-3 majority held that when Title VII of the Civil Rights Act prohibits discrimination on the basis of “sex,” that includes sexual orientation and gender identity. Conservative Justice Neil Gorsuch wrote the majority opinion, noting: “An employer who fired an individual for being homosexual or transgender fires that person for traits or actions it would not have questioned in members of a different sex. Sex plays a necessary and undisguisable role in the decision, exactly what Title VII forbids. Those who adopted the Civil Rights Act might not have anticipated their work would lead to this particular result. But the limits of the drafters’ imagination supply no reason to ignore the law’s demands. Only the written word is the law, and all persons are entitled to its benefit.” (Seattle Gay News – Mike Andrew at http://www.sgn.org/sgnnews48_49/page2.cfm)