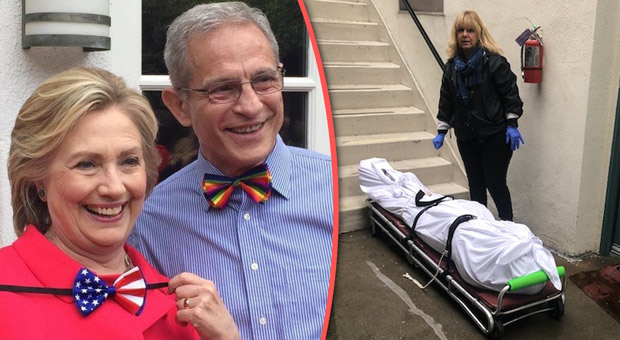 West Hollywood, CA – Protests have erupted outside the home of a wealthy Democratic donor in California, after a second man died there in 18 months. More than 100 people gathered at the house of Edward Buck in West Hollywood on the night of January 7 to demand the activist be arrested. Buck – a regular donor to Democratic campaigns including Hillary Clinton’s presidential bid – was investigated for a suspected murder when Gemmel Moore, 26, was found dead of a meth overdose in July 2017. The retired donor was again interviewed by police yesterday after another black man, in his 50s, died in his presence although the cause is not yet known.

Jasmyne Cannick, a public affairs strategist who has worked with Gemmel Moore’s family, said the DA and Sheriff’s Department “have blood on their hands” for failing to properly investigate the donor. Cannick alleged that Buck lures men to his apartment with promises of cash and injects them with crystal meth for his own sexual gratification, although the claims are as yet unproven. The Moore case was closed after the Los Angeles District Attorney found insufficient evidence to prosecute, sparking controversy from local campaign groups. In February of last year Moore’s family published pages from his diary in which he alleged that it was Buck who first introduced him to narcotics. These revelations prompted the LASD to reopen its investigation into Buck. Since the investigation was launched, a number of other men of color have come forward to claim political power player Buck, who is single and came out as gay at 16, paid them to take drugs.

Buck’s attorney, Seymour Amster, said the man was a long-time friend of Buck’s in his 50s, and had lived in West Hollywood for 25 years. Amster claimed that the man had “a history of substance abuse”. “Unfortunately, in the early hours this morning, a good friend of Ed’s reached out to him. Ed was reluctant to have him over but he was insistent. He had him come over and come into his apartment,’ Amster told DailyMail.com. “Ed had just gotten out of the shower, so he went to get himself more appropriately attired. He came back into his living room and his friend was acting with bizarre behavior. Shortly thereafter it was obvious his friend needed medical assistance. Ed called paramedics. They arrived, they were unable to revive him, and unfortunately, he died in the apartment . . . It seems the individual came over already having consumed controlled substances. There were no controlled substances ingested in the presence of Ed, nor did Ed give any to his friend.” (The Dailymail.com – Ryan Parry, Josh Boswell & Ariel Zilber at https://www.dailymail.co.uk/news/article-6567071/SECOND-man-dies-apparent-overdose-apartment-prominent-white-Democratic-donor-Ed-Buck.html)