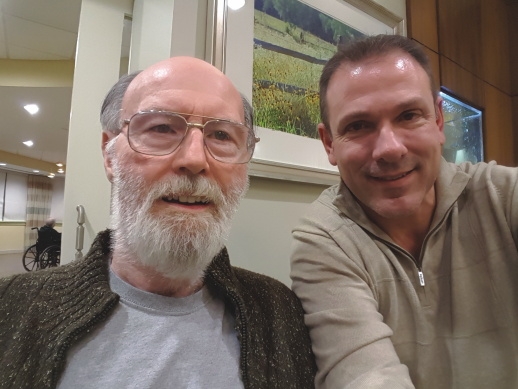 This week we who are in the Christian faith tradition celebrated All Saints Day. It’s a day we commemorate the lives of those people who have particularly shown through their life and witness what it means to be a faithful Christian. But are “saints” limited only to Christianity? Technically the term originated to described those who were “holy” (sanctus) in Christianity, but what if we applied that term more broadly to describe those people whose lives have shown as an example for us?

Who are your saints? Who are the people who have lived exemplary lives and shown you what it means to love and be loved more fully?  There are those famous people like Mother Teresa, Mahatma Gandhi, Martin Luther Kingt, the Dalai Lama. People who have used their gifts and talents to change the world. We celebrate them.

But there are others who may be only famous to a select few. A grandmother whose love kept her family together. A mother or father who gave so much to make their children’s lives better. A teacher or faith leader or community leader who changed lives and lived in ways that gave compassion and mercy a real face.

This weekend I said goodbye to such a man. Larry was my professor/mentor and later became my spiritual father and best friend.  I wrote about him in a column back in the winter. He had dementia. But even in the midst of his illness, he found ways to show love. He was generous with his money, with his time and with his love. He always made time to listen and no holiday went by without some silly card or gift to celebrate.  One day he sent me a card and said that since there was no formal “surrogate son” day, he was creating it!  And so we celebrated.

I wrote no column for the last edition of Baltimore OUTloud. That’s because I spent the better part of a week sitting in his nursing home room waiting for him to transition from this life to the next. I held his hand, spoke to him even though he could not respond or react.  At that moment, in that place, he was all I cared about. Being present for him in the only way I could. I remember the day he was diagnosed, he called me and we cried together. “Don’t leave me until I don’t know you anymore,” he said.  I assured him that I would never leave him, even after he didn’t know me anymore, I would still know him!

I sat with him and held his hand, wiped his brow and told him I loved him and it was okay to go.  It was the one last gift I could give to a man who for 28 years gave so much to me and my family. It hurt like hell to watch him die, but there was a joy in that moment as well. I guess the only bad thing about being gifted with a third parent is having to lose a parent three times.

And so I challenge each of us: Who are those “saints” in our lives? Who are the people who taught us more about what it means to love and be loved completely? And more importantly: How are we being saints for others around us? Who looks at us and sees the embodiment of compassion, justice, and love?