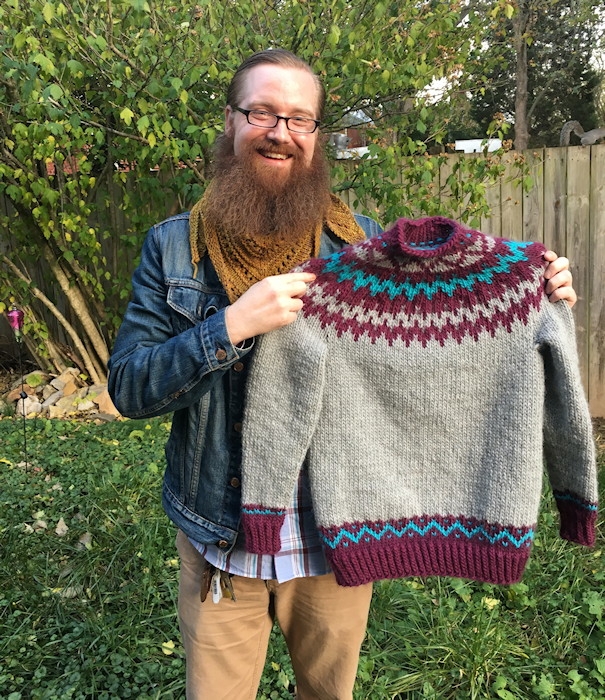 I spend a lot of time and energy avoiding risky situations. I always look both ways before crossing the street; I don’t drive fast; I wear sensible shoes. Maybe this makes me boring, but it also keeps me safe and, for the most part, happy. I think a lot of us fall into this pattern as we get older, which is why when we do anything out of the ordinary it’s a cause for celebration. On these occasions we remember that in trying to keep things consistent by avoiding lows, we also sometimes miss out on the highs.

This week I’m writing about a risk I did take. That risk goes by the name T407, and I’ve spent the last week bringing it to life. You see, T407 is a sweater, a gift I decided to make for Tori Amos a few weeks ago when I bought a ticket to her solo concert in Washington, DC.

If you’re thinking I’m a little nutty, you’re not alone. Even as I came up with the idea for T407 I knew it was risky. First of all, knitting a sweater requires a significant commitment of time, which was already short. Secondly, imagine a stranger gifting you with a hand-made, customized sweater. You would likely be pleased by the effort, but also a bit leary. I mean, who does something like that? Either a nice, well-meaning person or a nice, well-meaning person in need of psychiatric help and an explanation of personal boundaries. So, even as I set to work designing and knitting T407, I was asking myself, “Is this too much? Am I being crazy?” And honestly, there were several times when I thought the answer was a resounding “Yes.”

Then the allegations of sexual misconduct against Harvey Weinstein and, later, Kevin Spacey, made the headlines. I wrote about this and the #metoo campaign in my last article, as well as RAINN, an organization dedicated to helping those affected by sexual violence. You see, Tori Amos has been an instrumental part of RAINN since its inception, serving as a the first national spokesperson and dedicating time and resources over the years. Tori has been very open about her experience as a survivor, which in turn has helped a number of her fans seek help and feel less alone. Having found strength in Tori’s music and message myself, I decided to pick up my needles and get to work.

I decided that if I was going to do this, I had to do it right. This meant I created an original design, but had to guess measurements and proportions. It was simultaneously exhilarating and nerve-wracking. What if it didn’t fit? What if it fit too well and just made me seem that much creepier? What if I didn’t even get to give it to her? But also, what if I did get the chance and she loved it? I decided the possible pros outweighed the cons and dedicated all my free time to knitting.

It took longer than expected, and I pulled two all-nighters to finish in time for the concert. In fact, I finished at exactly 4:07 am the morning of the concert, hence T407. When I arrived at the venue I took T407 to security and asked if there was a policy or procedure for giving gifts. After a quick meeting and examination, they deemed the sweater safe and took it backstage before the show.

That was the last time I saw T407 in person. Part of me wonders if Tori ever received it and, if so, what she thought of it. I also wonder what to think of myself. Was I well-meaning? Yes. Creepy? Possibly. Was it worth it? Yes.

Even if it all went wrong, I’m glad I did it. I’d like to think that my effort put a little more kindness into the universe, and that’s always worth the risk.