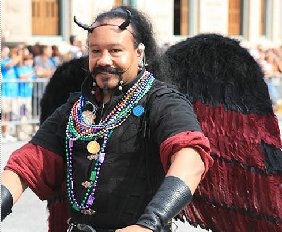 I’ve interviewed a lot of leather titleholders in this column. Some were inspiring role models who went on to do wonderful things in their community during their title year. Others were just nice people who wore a sash. It is important to note that a leather title does not make one a role model and not all role models have a sash.

The older I get the more I find myself looking back over my life. It’s funny the things we remember. I’m not talking about major events like special birthdays or family funerals – we’re always going to remember those. It is the little things, like a kind gesture from a friend, that fun dinner party, or a story that I’ve told before: that night over 30 years ago when I saw a man in full leather at the opera.

Last week I had the pleasure of taking that man to lunch. His name is Barry Newman and I am happy to say that over the years he’s become a friend of mine. I’m sure he doesn’t think of himself as a role model, but as I sat in that long-ago audience in my little suit and tie I remember thinking I would never have the courage to be myself in public. I’m sure Barry didn’t think about it at all.

Born and raised in Baltimore, Barry discovered the leather community when he was in his 20s and living in New York City. It those pre-AIDS years the leather community was flourishing, and Barry often found himself at The Spike, Rawhide, or Black Eagle. Back in Baltimore he got a job working with leather at the Leather Underground. He made slings, restraints, cockrings, and even the sash for the first female Eagle titleholder: Ms. Baltimore Eagle 1992 Glenda Rider and the sash for the first African-American Mr. Maryland Leather Tony Hash in 1993. He also made gift certificates for the leather store that were handcrafted out of leather. While working at the store he met Damien Sanzone and John Mank who sponsored him to join a leather club, COMMAND, MC.

Barry spent five years with the club and even served as the Master at Arms. Unfortunately, when he often found himself having to work during club functions or simply didn’t have the money to go to leather events, he dropped out. He is now getting more involved with the community and attends events with the ShipMates Club including marching with them in this year’s Baltimore Pride Parade. Over the years Barry competed in four leather contest and placed runner-up for Maryland Mr. Drummer, Mr. Maryland Leather, and Mr. Baltimore Eagle. (Many years ago, he also competed for Ms. Go West – but that’s another story.)

Barry has always been visible in the LGBT community. While working at a stereo store on Howard Street he met many local DJs and ended up working as a DJ himself at Club Mitchel, Numbers, and other gay clubs in Baltimore. He also worked at the gay county-western dance bar Stagecoach, which is now part of Grand Central. While working at Billy’s, a restaurant located at 25th and Howard Street, he met owner Tom Kiple who would later open the Baltimore Eagle bar and invite Barry to join the Baltimore Eagle staff.

Barry was sorry to see the reborn Baltimore Eagle close recently. He felt that the bar reenergized Baltimore’s leather community and brought out the young people. He hates that in this internet age people don’t go out and socialize like they once did or if they do go out they spend much of the evening on their phones. Barry was a big part of those days when Baltimore had many LGBT bars and they were busy every night. Now people use apps to meet or are texting in bars and not speaking to anyone.

As we sat outside in the late summer sunshine, we thought back to those fun days. What memories! I’m thankful for all those good times and I’m also glad I got to thank the man in full leather at the opera. I can never really repay him for what he taught me. Don’t be afraid to be yourself.