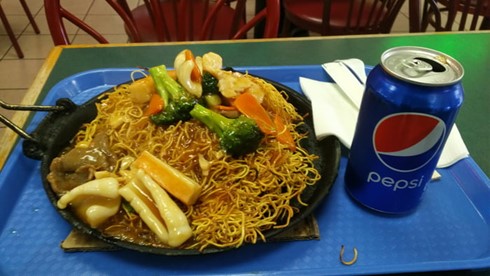 The worst part about adulthood is losing people you love, people of your own generation that are supposed to make it senility with you. While these deaths leave massive holes in our lives and our families, they are in the bluntest phrasing possible, part of the natural human lifecycle.  I am talking about the sudden deaths of friends from childhood. Friends lost in the blink of an eye from events that we could not rationalize the how and the why they occurred.  I am thirty-three years old and I have three tattoos on my body for friends that have left this Earth long before they should have, and two more that I need to have inked onto me. One is a bicycle for Bo, which I have written about before. The other is a Pepsi can and a clump of crab legs. This one is for Lauton, whose face has now surfaced in my memory since typing his name just now. A kind smile contrasting the intensely serious and sparkling blue eyes that held a lifetime of sadness over the twenty-four short years he was on this planet.

In my early twenties, I was strangling myself in the closet as I forced myself into the box marked “lesbian,” blatantly ignoring the “bisexual” and “trans” boxes at my feet. It was 2009, and although that makes it 12 years ago, I can picture the four of us sitting on Brian’s bed, drinking some syrupy sweet liquor and listening to All Time Low and Secondhand Serenade on repeat. Alli, Brian, Lauton and myself. Four half-closeted queer kids just trying to find our way in the farm-dotted landscapes of Washington County. Other than listening to emo music and the seemingly constant at the time dropping of Lady Gaga songs, there was not a lot for us to do that was not driving around the countryside, chain smoking Marlboro menthol lights to the soundtrack of our youth, and that is what we did. Hours upon hours of driving from Hancock to Smithsburg, blaring the same ten songs at the top of our lungs in between Ouija board outings and trips to walk around the mall and eat food court Chinese food.

Lauton was one of the first people I connected with over a shared mental state, not similar interests. He and I would spend entire afternoons, just sitting at a park somewhere, talking while birds flew overhead. Discussing our plans for the future, or bemusing the traumas of our past. There is something kismet about those early adulthood connections that cause two people to bare their souls to each other, and that was how Lauton could be with anyone. He longed for genuine connections to replace the splintered ones in his home life. Brian had just come out, and Lauton was one of a handful of people that we met over that period. However, unlike most of them, Lauton stuck around. Even after Brian and Lauton were just friends for good, Lauton was part of our lives, when he was around. Bad parents leave you with a lot of inability to thrive on your own, and Lauton suffered from that. He moved with his mother to Tennessee after him and Brian had broken up, and when he resurfaced after that, you could see the scars he carried from that experience in his eyes. Still the same bright sapphire that they had always been, but now engraved with the tumultuous life experiences from the past few years. Brian had since moved to Washington, but Alli and I were still in the area, and were overjoyed to have him back as a regular presence in our lives. Even if it was short lived.

Flash forward another year-ish, and Alli and I are now finished with our undergraduate studies and attempting to navigate a working economy that wants to punish our entire generation for the sins of our parents. She was able to jump to the career job as soon as our last semester ended, while I was floundering, both career wise and mentally. I was working as an “account manager” for a MLM company that consisted of me slinging Directv to people who just wanted to pick up an HDMI cable at Best Buy. I walk in one day, and behind the Geek Squad desk, I see a familiar pair of blue eyes, now underneath a bleached-blonde mop of hair. For the two months after that, Lauton and I had lunch every shift we overlapped together. Usually Wendy’s and nicotine, and always accompanied with the same five jokes we had coined a half-decade prior as we drove around in Brian’s Honda Civic.

He moved to Arizona after his tenure at Best Buy. We had reconnected for the last time via social media. He was attending college and dominating League of Legend matches, sometimes against my brother. He had a new boyfriend, and we talked about visiting each other. I was able to tell him that I was Asher in one of our last conversations, and as I sit here with a growing lump in my throat, I am trying to take solace in that I was able to speak that truth to him while he was still here. Brian called me not even three weeks after that and I knew something was wrong. Lauton was gone. His blue eyes had closed for the last time as he overdosed in Arizona. I spoke briefly to the partner he left behind, and three days later there was an obituary written by a family that never wanted to know Lauton while he was alive. April marks five years since his passing, and I still cannot listen to “Remembering Sunday” without tearing up at the last verse. I hope there is an afterlife, so that we can eat Chinese food one more time, and that Lauton finally has the peace and stability he searched his whole life to find.