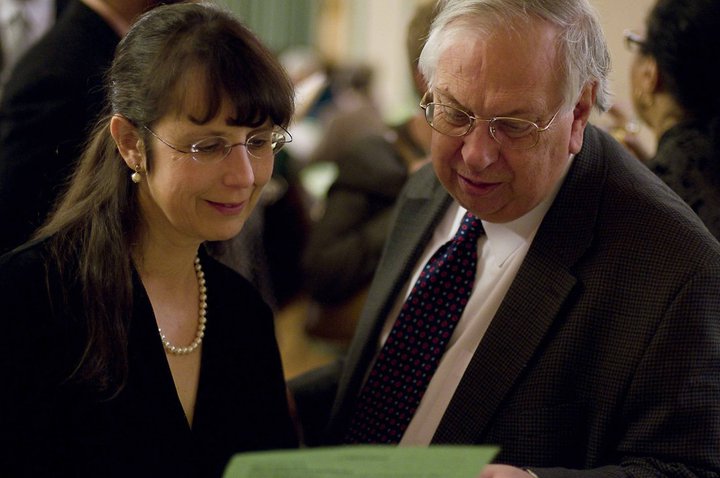 A memorial service will be held for Jim Williams on Saturday December 7 at Brown Memorial Park Avenue Presbyterian Church beginning at 11 AM.

JIM WILLIAMS, co- founder and longtime co-publisher of Baltimore OUTloud, died on Friday, October 4th at Seasons Hospice in Baltimore County following a long illness. He retired from the newspaper in June due to failing health related to heart and lung problems. He was 84 years old and had lived at Cross Keys for many years.

Jim was one of the four original founders of the newspaper and became co-publisher following the retirement of founding publisher Mike Chase in 2009. With years of experience managing nonprofits, Jim had great business sense and spearheaded an effort to pay off a significant debt that the newspaper had accrued. He was also instrumental in the decision to buy the Baltimore Gay Paper.

On learning of Jim’s death, current Baltimore OUTloud publisher Jim Becker said, “Jim devoted the latter half of his life to serving the gay community as executive director of Moveable Feast and AIDS Interfaith Residential Services. That commitment made him a natural fit as a founder of Baltimore OUTloud. He had great insight into the needs of the community that, combined with a strong business sense, made him invaluable to the newspaper. Until his health began to take its toll, Jim had boundless energy and a love of life, perhaps the result of growing up in New Orleans. He had a great sense of humor, loved a good party , and could light up a room. I will miss him as a tremendous partner in publishing Baltimore OUTloud and as a dear friend.”

Reflecting on Jim’s role in founding the newspaper, publisher emeritus Mike Chase said, “I met Jim shortly after he came to Baltimore and was immediately struck by his commitment to helping those with HIV/AIDS. He embraced Baltimore’s Q-plus community while making the city his home. It was that community spirit that led us to ask him to join in the founding of Baltimore OUTloud. Jim was a patron of local artists and all things of beauty. He faced life’s challenges with his characteristic good humor and a generous nature. I have been proud to call Jim a friend, and know he will be missed by many.”

Jim Williams was born at home in Shreveport, Louisiana, on April 9th, 1935. Two years later, Jim and his family moved to the suburb of St. Bernard Parish, outside New Orleans. His taste for hard work started showing, when at ten, he shined shoes in the local barber shop at 25 cents a pop. While attending Arabi (now Chalmette) High School, Jim was elected the first male cheerleader. “We would play football games across the Mississippi River and ride a school bus,” Jim recounted in an interview he gave to Baltimore OUTloud reporter Frankie Kujawa in June. “We would get into a fight after the games. I’d beat people with my megaphone and run like crazy to get onto the bus.”

Jim went on to attend Presbyterian-affiliated Arkansas (now Lyon) College, on a church scholarship. He was elected student body president and preached on weekends at churches throughout Arkansas.

After college, Jim dropped plans to be a minister and instead taught eighth-grade English at North Clayton High School for three years.

While teaching, Jim became very active in the state affiliate of the National Education Association (NEA), the national teachers’ union, eventually becoming the first Southeast regional director, responsible for 11 states and Puerto Rico. “However, we really had 22 state associations,” Jim remembered, “because the school systems were still segregated, and the NEA associations were also segregated. My task became to coordinate the merger of all these teacher associations in the South.”

Jim would stay with the NEA for the next 25 years, working particularly on civil rights issues. With other organizers, in March 1965 he joined in Martin Luther King, Jr’s Selma to Montgomery march.

The American Teachers Association (originally the National Association for Colored Teachers), was a separate organization that worked on issues of educational equality in tandem with the NEA. As racial desegregation advanced in the wake of the Civil Rights movement, both organizations charted a path towards unification into what became the modern NEA. That dream was eventually realized when presidents of both organizations signed a historical merger agreement in 1966.

“I was in the Atlanta regional office and eventually became the first regional director,” Jim told the paper. “We would have meetings, and I would invite both segregated groups to Atlanta. It was interesting because I would have two white and two black leaders, and we would sit down and eat. It was the first time some of them had ever eaten as black and whites together. Even though they’d been in the same school system for over 20 years, they had never met each other!”

Louisiana and Mississippi were two of the last holdouts to integration. “My goal was to work with those states to comply. In Mississippi, we’d have meetings there and we’d go into all the schools. However, we had to keep changing the license plates on our rental cars we were using because we were being followed,” Jim recalled.

It was during this time that Jim received a call in Atlanta from his bosses in Washington, DC, asking if he knew about Dr. Martin Luther King, Jr. “I told them that you can’t be from Atlanta and not know who Dr. King was. I didn’t personally know him, but I knew of him.” Jim’s bosses wanted him to get a statement from Dr. King regarding a teacher’s union local in Chicago which was going through some issues with collective bargaining. “So, I went to his church, and after services I went over to shake his hand. I introduced myself and asked if I could talk to him privately. We went into his office afterward, and I explained to him the situation in Chicago. He asked me to leave my contact information and that he would have to investigate and do some checking. After investigating, he called me, and agreed to meet with the other local and we set up an appointment.”

Jim continued to work with the NEA from the 1960s until the 1980s. “It was while at the NEA that I came out. In our Atlanta office, we had a guy who worked for me who was gay, and who represented our office as the ‘gay person.’ And then they had a meeting of the whole association where our offices were, and they had a program – a panel. His name was Paul, and he came to me and said, ‘Jim, you know, you really should be the one on this panel, and not me, because you know more about it and it’s time that they know.’ So, he came up to my office, and I went down and sat in his chair. Others were asking me, ‘Is Paul sick?’ I just told them that I’ll make that announcement when I speak on his behalf in the meeting. So, when they introduced me, I came out before the whole group. By this time, I was still pretty young, and I had already left my wife. Some people were surprised, but others weren’t. The group in the auditorium was 600 people. So, I went up and talked about how important it was and I got a standing ovation. The state executive came by and gave me a big hug. Then I was starting to get all kinds of flowers and phone calls because I was the head of a unit. At that time, I was an administrator, and it was an unusual thing to do, but it was important to me.”

Following his retirement from the NEA, Jim worked for several Washington, DC, nonprofits, including Food & Friends. Jim then became employed as executive director of Movable Feast. When Jim joined Movable Feast, it was going through a transition and he was instrumental in revitalizing the organization and expanding its scope. After retiring from Movable Feast, he became executive director of AIDS Interfaith Residential Services (AIRS), another AIDS service organization that needed a strong administrator. Because of Jim’s superb business sense, strong commitment to serving the community and especially people with AIDS, he was an obvious choice and quickly helped stabilize AIRS.

While working for Movable Feast, Jim met Mike Chase, who was then editor of Gay Life newspaper. They were instant friends. When Chase’s spouse Lee Mooney, Joe Berg, and Jim Becker decided to launch Baltimore OUTloud Jim was an obvious choice to join the effort. Following the sudden death of Lee Mooney and the retirement of Mike Chase, Jim and Jim Becker continued to keep the newspaper publishing with the help of Mary Taylor, Steve Charing, and a host of other dedicated staff and volunteers that have served as the backbone of the newspaper from its inception.

Dr. Martin Luther King, Jr., once said, “Life’s most persistent and urgent question is, ‘What are you doing for others?’” Few people have embodied the answer to this question more than Jim Williams.

Jim is survived by a brother, son, and daughter.