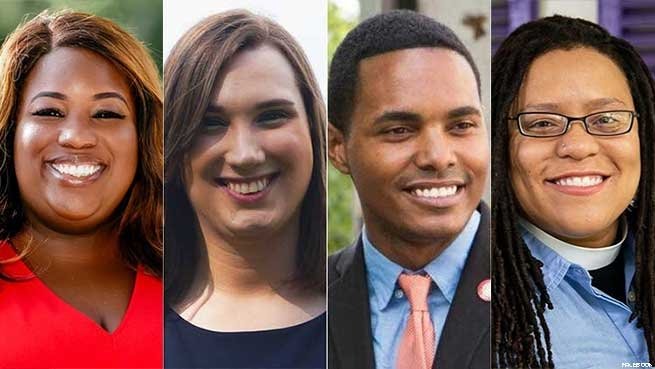 Washington, D.C. – As the new Congress convened this month, a historic number of LGBTQ people will make up the U.S. House. Nine openly LGBTQ candidates were elected this past November, seven of whom were incumbents. According to the LGBTQ Victory Fund, an organization that trains, supports and advocates for queer candidates, it’s also the most diverse class in history with four people of color. U.S. Reps. Mondaire Jones (D-NY) and Ritchie Torres (D-NY) became the first two openly LGBTQ Black members of Congress this month.

These nine are just a small fraction of the LGBTQ candidates that won elections across the country in 2020. From city councils to state assemblies, over 300 out LGBTQ candidates have taken office in the past two months. “In one of the most vitriolic and unprecedented election cycles of our time, LGBTQ candidates continue winning elections in numbers and in parts of the country thought unthinkable a decade or two ago,” said Annise Parker, president and CEO of the LGBTQ Victory Fund. Parker made history herself as the first openly LGBTQ mayor of a major city, when she was elected mayor of Houston in 2009. She went on to say, “LGBTQ people span every community — we are people of color, women, immigrants, and people with disabilities — and we are able to use that life experience to connect with voters from many backgrounds. This beautiful diversity provides an opportunity to connect on some level with every single voter in America.”

Former presidential hopeful Pete Buttigieg was not the first openly gay presidential candidate in a major political party. That honor, surprisingly, sits with a Republican, Fred Karger, who was unsuccessful in his bid for the presidency in 2012. Buttigieg was, however, the first openly gay candidate to earn presidential primary delegates toward a major party’s nomination this past year. He made history winning the Iowa Caucus in February and in December was nominated to head the Department of Transportation by President-Elect Joe Biden. If confirmed, he will be the first openly gay cabinet secretary approved by the U.S. Senate. Transgender candidates made history in 2020 as well. Delaware Sen. Sarah McBride, who helped pass gender identity protections and hate crimes legislation in the state, now assumes office in the capitol, making her the first transgender state senator in the country. According to LGBTQ Victory Fund, there are just four out transgender people currently serving in state legislatures. (Q Notes Online – Chris Rudisill at https://goqnotes.com/68755/a-rainbow-tsunami/)