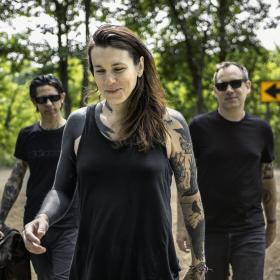 It’s interesting that Boy George and Culture Club, as they are now known, would call its new studio album – its first such release in almost 20 years – Life (BMG) as that’s the one thing it could use more of. For a group that was so influential and groundbreaking in its early 1980s heyday, Culture Club sounds surprisingly out of touch. You have to wonder what it is they’ve been listening to all these years. At a time when electronic dance music is having a strong resurgence, Life would have benefited from some of the house music energy that Boy George incorporated in his 1991 Martyr Mantras album. Instead we get some recycled takes on the band’s longtime flirtation with reggae on “Let Somebody Love You” and “What Does Sorry Mean?” The dated “Bad Blood” (not a cover of the Neil Sedaka / Elton John duet) and “Human Zoo” sound like late 1980s leftovers. However, it’s not a total loss. The brassy, sassy, and soulful “Resting Bitch Face” deserves to be a hit. “Different Man” is the closest thing to a dance number and it has a powerful (if somewhat repetitive) message. “Oil & Water” is a moving ballad about difference.

Laura Jane Grace and the Devouring Mothers is the latest musical incarnation of Against Me front-person and trans icon Laura Jane Grace. The biggest challenge for Grace since the release of Against Me’s 2014 masterpiece Transgender Dysphoria Blues, is creating something as good (or better). Bought to Rot (Bloodshot) definitely has moments of divine inspiration. The divorce song “I Hate Chicago,” for example, is as humorous as it is serious. “The Airplane Song,” which may qualify as Grace’s poppiest and most accessible number, is utterly irresistible. The cowpunk of “Apocalypse Now (& Later)” and “The Apology Song” are a nice fit for an album on a legendary alt-country record label and “The Friendship Song” is sincere without being cloying.

One of the things that Laura Jane Grace understands about rock bombast is that variety breaks up the monotony. That’s something Honolulu-based Kings of Spade, led by out, mohawked front-woman KC, will have to learn. As it is, some of the songs on Kings of Spade’s new self-titled album (on Soundly), which owes a massive debt to Southern blues rock, tend to blur in the bluster. Queer anthem “Strange Bird” (about rocking to the beat of your own drum) is worth checking out, but you might find it somewhat sonically indistinguishable from say “Way She Goes,” “San Antone,” and “This Child.” The rap-metal (remember that?) of “Bottoms Up” changes things up a bit, but Kings of Spade would profit from playing some of the other cards in its deck.

Addie Sartino, the queer front-woman of young (19 to 21 years old) Kansas City-based (!) band the Greeting Committee is at the opposite end of the spectrum from Laura Jane and KC on the debut disc This Is It (Harvest). No howling, no screaming, just pleasing singing. That’s one of the Greeting Committee’s trademarks. Whether Sartino’s singing about when she was “just a kid” and wondering whether this is all there is on “Is This It?” or settling down after spinning out on “Pull It Together,” the Greeting Committee sounds older and wiser than you might think. Additionally, the band’s wonderful use of piano and horns gives them a sophisticated sheen. When the band rocks out, as it does on “Flint,” it’s a welcome distraction.  Make a point of saying hello to the Greeting Committee.

Named for their “aged arch top guitars,” Roscoe & Etta is a duo featuring out singer / songwriter Maia Sharp and Anna Schulze. Sharp is one of those artists who is comfortable sharing the spotlight (she recorded an album with Art Garfunkel and Buddy Mondlock), so it’s not surprising to hear that she has teamed with another singer / songwriter to form a duo. The outstanding eponymous 11-song Roscoe & Etta debut album (on Crooked Crown Records) showcases both artists’ songwriting and performance chops, with “Broken Headlights,” “Chocolate Sauce,” and “Somebody” among the highlights.

Bay Area duo Book of J (Jewlia Eisenberg of Charming Hostess and Jeremiah Lockwood of The Sway Machinery) combines their specific talents on its self-titled debut (on 3rd Generation Records). The baker’s dozen “Bible-haunted,” queerly political tunes that cross-breed Americana with Jewish folk music, might make some listeners proclaim, “Funny, you don’t look blues-ish!” If you have daring taste in music then Book of J just might be your cup of kasha varnishkes.

For a different kind of “group” effort, check out Everybody’s Talking About Jamie: Original West End Cast Recording (Broadway). Dan Gillespie Sells, the gay front-man of the band The Feeling and the latest indie musician to turn his attention to the stage, wrote the music for the musical. The book and lyrics are by Tom MacRae. Everybody’s Talking About Jamie is based on the BBC documentary Jamie: Drag Queen at 16 and stars John McRea as the titular character Jamie New. The songs on the cast recording alternate between contemporary musical theater fare, such as “Over the Top,” and dance-oriented numbers such as “Work of Art.”

Laura Jane Grace and the Devouring Mothers perform on April 19th in Philadelphia at Underground Arts, and on April 23rd in Washington, DC, at Rock & Roll Hotel.