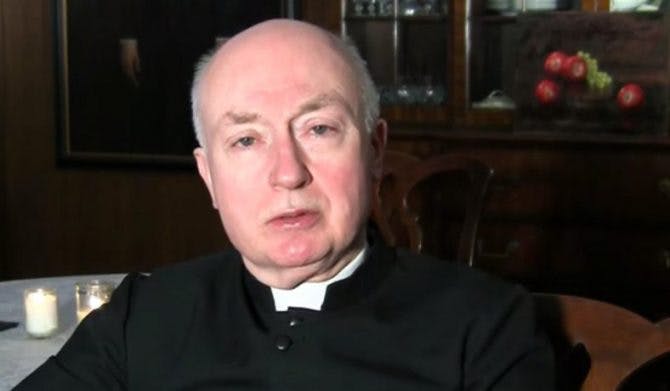 New York City – Queerty reports that Father George Rutler, a well -known antigay Catholic priest in New York City, has been charged with sexual assault of a female security guard. According to reports, Rutler attacked the woman after she filmed him watching a gay adult film.

The incident happened November 4. The National Catholic Reporter reports that Ashley Gonzalez, a 22-year-old security guard at St. Michael the Archangel Church, walked in on Rutler, 75, watching a video of two men performing oral sex on one another. Gonzalez whipped out her cell phone and began filming the incident. At that point, Gonzalez claims Rutler noticed her in the room and began to make sexual overtures to her. “He looked at me with a smile, looked away, and he put his hand inside his pants, and he was playing with himself,” Gonzalez told Bronx News 12. “He aggressively threw himself on me and grabbed me sexually, aggressively, and I was fighting him off of me.” Gonzalez managed to escape and alerted her mother and filed a police report about the incident immediately thereafter.

“I strongly deny this allegation, which I maintain is incoherent and painful to my reputation and inconsistent with how I have conducted myself in fifty years of ministerial service without any accusation of misbehavior,” Rutler said in a statement. The accusations of Rutler viewing gay pornography are of particular note given his long history of opposing LGBTQ rights. As a host on the faith-based Eternal Word Television Network, Rutler has criticized Pope Francis for his calls for embracing the queer community, blamed societal woes on “abortionists and sodomites,” and called gender equality “a homosexual vision of culture.” In addition, Rutler partnered with white supremacist and former Trump advisor Steve Bannon to dedicate a shrine to persecuted Christians in 2017. (Queerty – David Reddish at https://www.queerty.com/antigay-priest-got-caught-watching-gay-adult-film-now-faces-assault-charges-20201203?utm_source=Queerty+Subscribers&utm_campaign=e855d5bbb6-20201203_Queerty_Newsletter&utm_medium=email&utm_term=0_221c27272a-e855d5bbb6-431876119}