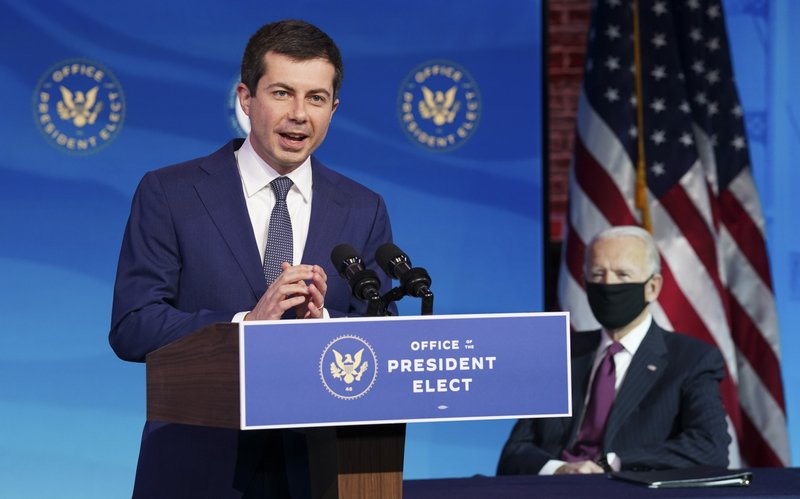 Wilmington, DE – President-elect Joe Biden has named Pete Buttigieg to be the Secretary of Transportation. The choice was officially announced December 15. He will be the first out Gay cabinet officer, as well as the youngest ever, at age 38. LGBTQ organizations were predictably ecstatic over the news. The Human Rights Campaign called the nomination historic. “With the reported historic nomination of former South Bend Mayor Pete Buttigieg as Secretary-designate of Transportation, President-elect Joe Biden and Vice President-elect Kamala Harris are keeping their promise, representing a significant step in creating an administration that reflects the diversity and life experiences of America,” HRC President Alphonso David said in a statement.

Other observers were more restrained. “Buttigieg’s landing spot comes as a surprise given his thin transportation policy résumé,” Politico commented dryly. Still others found the Buttigieg appointment unwelcome. Black community leaders in South Bend, where Buttigieg served two terms as mayor, were critical of Biden’s move. “He did a really bad job for this community and my district in particular,” South Bend City Council member Henry Davis Jr. said. “Bus lines have been shut down and cut off in one of the poorest census tracts in this country.”

The Associated Press suggested that Buttigieg won the cabinet spot because Biden came to like him personally during the campaign. “I don’t think I’ve ever done this before, but he reminds me of my son Beau,” Biden said at one point. “I know that may not mean much to most people, but, to me, it’s the highest compliment I can give any man or woman.” Buttigieg was also the first of Biden’s presidential primary rivals to endorse him. Now, the personal good feeling between Biden and Buttigieg has elevated the former mayor to “a key role in the incoming administration’s push to rebuild American infrastructure and the economy,” according to AP sources. Buttigieg reportedly wanted to be appointed US Ambassador to the United Nations, but that spot went to Linda Thomas-Greenfield, an African-American woman and former assistant secretary of state. His presidential bid ran out of steam after the first four states, however. He failed to make any inroads with Black or Latinx voters, and curiously enough, he also failed to win the affections of LGBTQ voters. Polls consistently showed them favoring Bernie Sanders, with Elizabeth Warren in second, and Buttigieg a distant third. (Seattle Gay News – Mike Andrew at http://www.sgn.org/sgnnews48_51/page1.cfm)