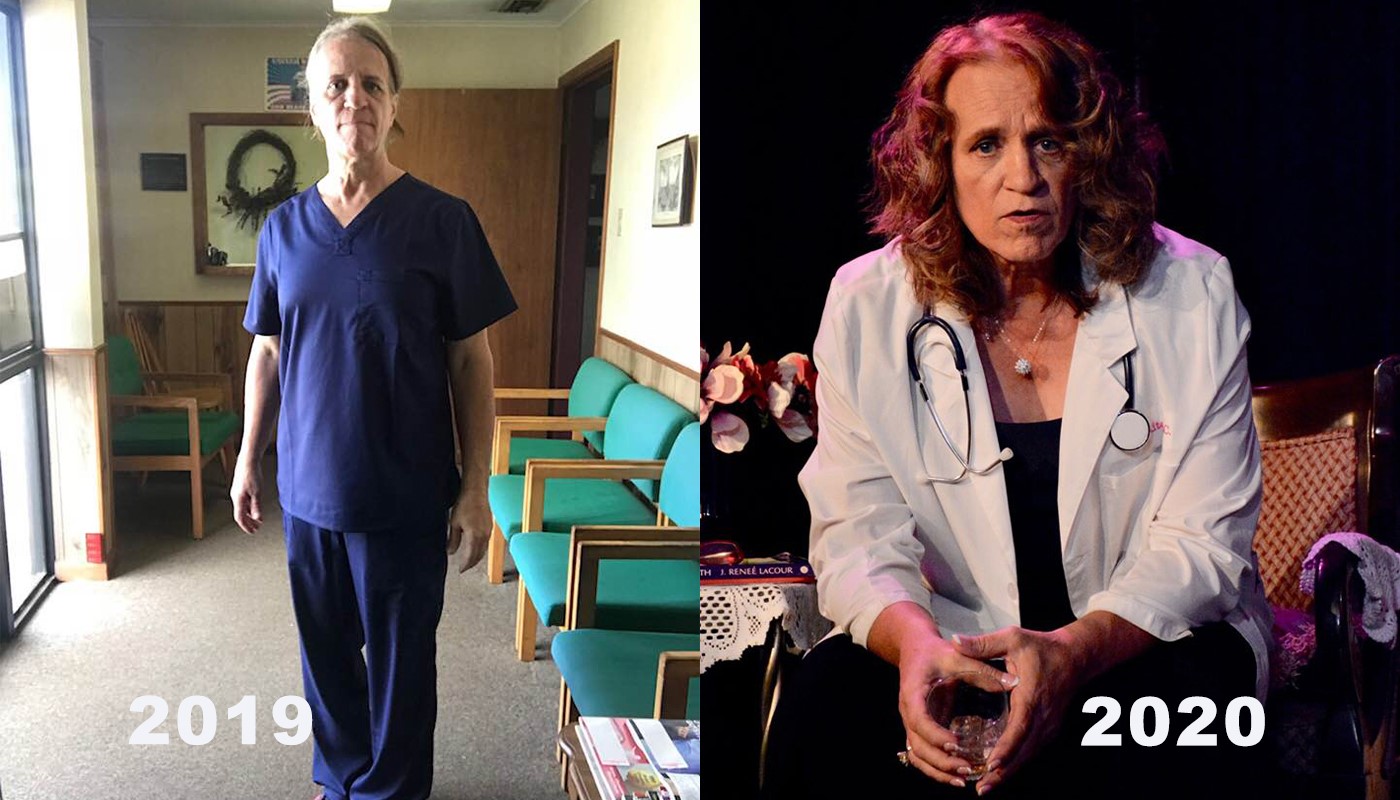 Anyway, I had an elderly gentleman come in. I think I was full time maybe two weeks. He asked for the doctor, I told him I was the doctor. He looked at me funny and suddenly said, “you one of them freaks, aren’t you?” I laughed and asked, “why is that?” He said, “Because you look like a woman!” I was feeling feisty, so I said, “yes I am.” He wasn’t expecting that response. I think it kind of short-circuited his brain when I didn’t back down or run away. He said well I’ll sit over here and proceeded to sit 4 chairs away in my waiting room.

I have to be honest if this was Rory, pictured on the left, he would have never talked to him and just thrown him out at that point. He has thrown people out for much less… But since I am now Phee, (or Sophie the one on the right), I decided not to throw him out and actually have a conversation. I think hormones has mellowed me an awful lot. After a few minutes of chatting he told me he had one of them freaks in his family and he doesn’t talk with them at all and hasn’t seen them in years. I said, “that’s so sad. Just think about what you are missing out on.” I actually think that really hit him right between the eyes. I remember he didn’t respond but just thought instead. I was very proud of myself at that point. I wonder if the universe put us together so I could help him reconnect with his family?

Then I went into doctor mode and asked what was bothering him. He told me he hadn’t been sleeping and had low back pain that went down his leg. He also said he tried everybody else and was at the end of his rope. I thought about what to do for about 2 seconds and told him I could probably help, and I would be happy to see what I could do. He reluctantly agreed and I made him fill out forms, every line.

Then I took him back and I treated his low back pain. He did lighted up a lot during the course of treatment. I think I did him good and after I finished, he left. I don’t remember if he had said anything or not. I had forgot about him until two weeks later when I received a phone call. It was my elderly gentleman who just wanted me to know that I had helped him a few weeks earlier. We talked for a minute and he also said that if he would hurt again that he would come back to me. I took it as a real win for freaks like me because this was his way of apologizing to me. For him to say I helped him, and he would return was a major win. If I would just thrown him out, what would that done for me or anyone else, maybe even his family member that he shunned.

What a difference a year makes, I get ma’am close to 100% of the time, by new patients. I had another ninety-year-old gentleman come in today. I think he was, lonelier, than really hurting. But I could be wrong. I was at the door when he came in and sat down in the waiting room. I said, “hi, what can I help you with?” He told me that he was unhappy with his physical therapist and was looking for a new one. We talked for a few minutes and I decided that I really couldn’t help. He needed more exercise rehabilitation than what I could do. As we talked, he was shocked to find out that I was the doctor. He said it was unusual to find a lady doctor. Because you know in his generation women could not be doctors. Bless his little heart, I wonder what he would have thought if I had told him I was trans? Sometimes it’s good to be just taken for who you are, but it sure does give you a different prospective of other people’s plights. As always love, light, and peace. Sophie