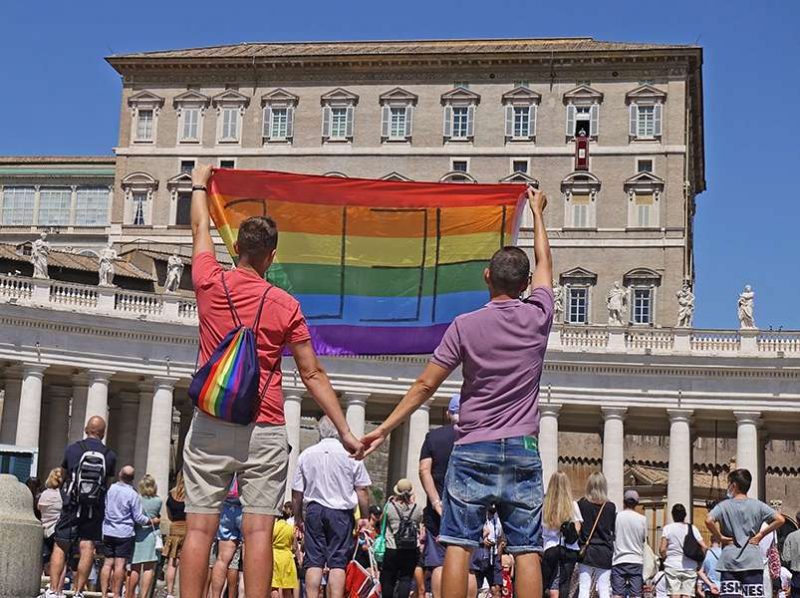 The Vatican – LGBT+ YouTubers and campaigners Jakub and Dawid Mycek-Kwiecinski’ went to The Vatican with a simple message for Pope Francis—HELP!. Their journey comes as homophobia appears to be spiraling out of control in Poland. The pair wanted to highlight Polish Catholic leaders’ involvement in stirring up this hate. The couple unfurled the LGBT+ Pride Flag with the word ‘Help’ written on it as Francis conducted Angelus Prayers from his balcony in the Vatican. They returned to St Peter’s Square several times during the week.

Jakub and Dawid said: “Polish bishops called us pedophiles. They say that we are a disease and even that COVID-19 is a punishment for the world for LGBT sins. Meanwhile the Catholic Church has inspired our local authorities to create ‘LGBT Free Zones’ in Poland. We believe that all these actions don’t go along with Pope Francis’ teaching. So, we did it to encourage him to take action.” Pope Francis has a mixed record on LGBT+ issues. He famously said he wouldn’t judge gay people. However, he also believes same-sex marriage ‘disfigures’ society and that trans people are like ‘nuclear weapons’.

The level of hate in Poland has been on the rise since early in 2019. In recent weeks there has been a dramatic increase in protests and public anger – on both sides. This month has seen LGBT+ and hate groups go head-to-head at demonstrations in Warsaw. LGBT+ campaigners also protested after police conducted mass arrests of their fellow activists. The last two years have seen Poland’s ruling Law and Justice Party (PiS) attack LGBT+ people in election campaigns to shore up its populist support. The victory in that election of anti-LGBT+ incumbent President Andrzej Duda has left many to fear there is no hope. Campaigners expect further anti-LGBT+ measures to come before Poland’s parliament in the coming months. Around a third of the country has declared itself an ‘LGBT Free Zone’. (Gay Star News – Tris Reid-Smith at https://www.gaystarnews.com/article/gay-polish-couple-travel-to-the-vatican-to-beg-pope-francis-for-help/)