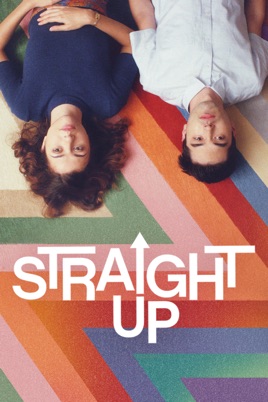 Similarities between the two probably end there. In Straight Up, gay millennial Todd is undergoing a severe sexual identity crisis, or so he tells friends Ryder (James Scully) and Meg (Dana Drori) in an L.A. diner. He believes he could statistically improve his love life if he started dating woman. Todd thinks he was conditioned to be gay since being called a faggot in grade school. Even though Todd has never had gay sex, his friends disagree with him, pointing out that women aren’t “gay blind” anymore. He also shares this revelation, as well as his fear of being alone for the rest of his life, with Frances (Tracie Thoms), his psychoanalyst paid for by his parents.

Not far away, Rory (Katie Findlay), a struggling actress balances a life of auditions, waitressing, improv classes and leaving rambling voice mail messages for her itinerant mother. She’s also making an effort to be less negative with varying degrees of success.

In modern rom-com style, Todd and Rory meet cute in the self-help section of a library where she mistakes him for an employee because he’s shelving books. As he explains to her, it’s his “legit OCD” that drives him to correct the out of order books, and that his job is in software coding. After an awkward start to the conversation, they discover that they have things in common. He invites her to the house where he is also a part-time house-sitter and they drink wine, eat cake and talk non-stop for eight hours.

Before you know it, Todd and Rory are inseparable. Rory joins Todd at a housesitting gig in Monterey. The pair has dinner with Meg and her new model boyfriend Zane (Joshua Diaz). They attend Ryder’s birthday party together. It’s there that Rory begins to have an epiphany about Todd after Meg accidentally outs him and Rory sees him interacting with Ryder and his other gay friends. Of course, the fact they’ve been dating for six months and haven’t had sex yet, also plays a part. After a failed sexual intimacy attempt, Todd and Rory decide it’s best not to ruin their relationship with sex.

Thanksgiving with Todd’s parents Topanga (Betsy Brandt) and Wallace (Randall Park) is both hilarious and poignant. But the Christmas party at Meg’s, including Charades and Truth or Dare, couldn’t possibly have gone worse. The tension increases after Rory has a bad day at improv class and Todd and Ryder have it out. Todd, on an increasingly downward OCD spiral due to emotional stress, returns to therapy, and begins to make progress. Meanwhile, Rory, fed up with her lack of professional and romantic achievement, tells Todd she’s moving to Seattle, which brings him to the brink of a breakdown.

At her new office job, Rory meets Craig (Ken Kirby), who may or may not be the Seattle version of Todd. Leaving the office for lunch, Rory is surprised by Todd who has organized a flash mob as part of his marriage proposal to her. He even goes so far as to say, “If Helen Keller can learn to talk, I can learn to eat you out.” If that’s not a declaration of love, what is? However, it’s not enough for Rory and she turns him down.

In the next scene, the sudden, unexplained presence of Darien (Logan Huffman), in a room where Todd and Rory, unexpectedly together, prepare to play their favorite word game, leads to a conclusion as ambiguous as Todd’s sexuality. Confusing finale aside, “Straight Up” is funny and touching, often in the same scene. Sweeney deserves to be commended for creating an admirable and entertaining feature-length debut. DVD bonus features include outtakes and a deleted scene. Rating: B