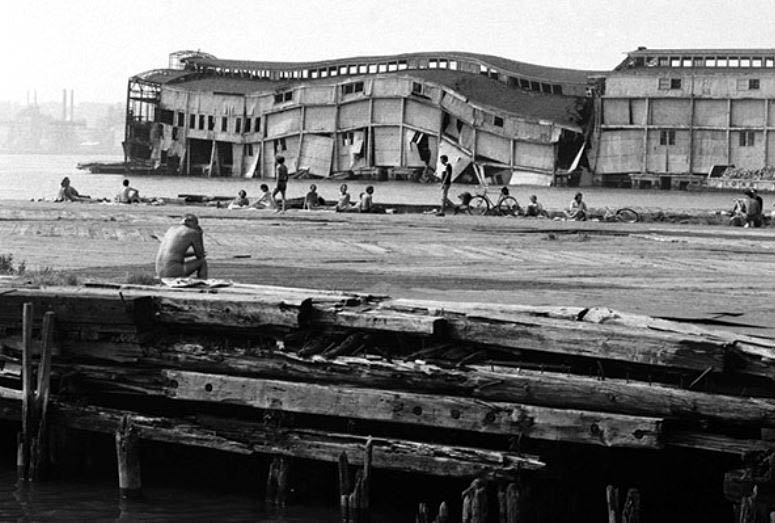 New York, NY – David Hudson writes for Queerty about a photo exhibit documenting the notorious westside piers in lower Manhattan at the end of Christopher Street. Back in the late 70s and early 80s, the riverside western edge of Manhattan was far less developed than today. Infamously, many gay men went to the abandoned piers near Christopher Street looking for sex, or as a place to hang out and sunbathe during the summer months. Fences around the piers kept most people out. However, the flimsy barricades were pretty easy to transverse if one wanted to do so.

Before the arrival of AIDS, the piers were a place of sexual liberation and community. One man who thankfully captured some of this brief period in New York’s history was photographer Stanley Stellar. An exhibition of his pier photos arrives at the Kapp Query gallery in NYC opened January 15. “I wanted to be part of this new freedom,” Stellar says in a press release for the show. “And with that freedom came this place behind a fence. There was a wooden fence placed in front of the perimeter of all the abandoned piers. And, as the cars went by on the West Side Highway, they didn’t know we were there. They didn’t know anybody was on the other side of the wooden fence.” Stellar, who was born in 1945, has lived in the same TriBeCa loft on N. Moore Street since the 1970s. He has witnessed—and captured through his lens—great changes in New York during that time. Through Stellar’s eyes, the one constant is his peers’ unwavering dedication to connection. Gay men want to connect, and they will gravitate toward those places that allow them to do so, even if they’re locations others would shun or fear to set foot.

“It’s a show about three gay piers,” Stellar told AnOther. “They were immense, abandoned, shed-like buildings. It was a hostile world. In the city, gay men could only meet at night, in the dark, in clubs or in bars. The piers were free. You could take off your clothes and lay in the sun, nude, with other guys looking for sex, right in Manhattan. And the police didn’t care. It was safe. We became a city within a city, and it was based on freedom and sunlight. There was nowhere else we could have done that. None.”

Stellar’s photos capture men relaxing, sunbathing naked, kissing, or getting more intimate with one another inside the piers, which offered an abundance of abandoned rooms. Stanley Stellar: The Piers (1976-1983) runs from January 15-February 19, 2022. (Queerty – David Hudson at https://www.gaycities.com/outthere/57788/new-yorks-notorious-cruising-spot-captured-photo-exhibition/) [Ed. Note: Saying that this was safe is relative. Homo History writes “ The piers were dangerous; several men fell to their deaths through the rotting floors and there was also the ever present threat of being robbed by drug addicts, attacked by gay bashers or arrested by the NYPD.“ A brief story of the piers and the photo accompanying this article plus others may be found at http://www.homohistory.com/2015/07/sex-on-piers-nyc-circa-1960s-70s-and-80s.html]