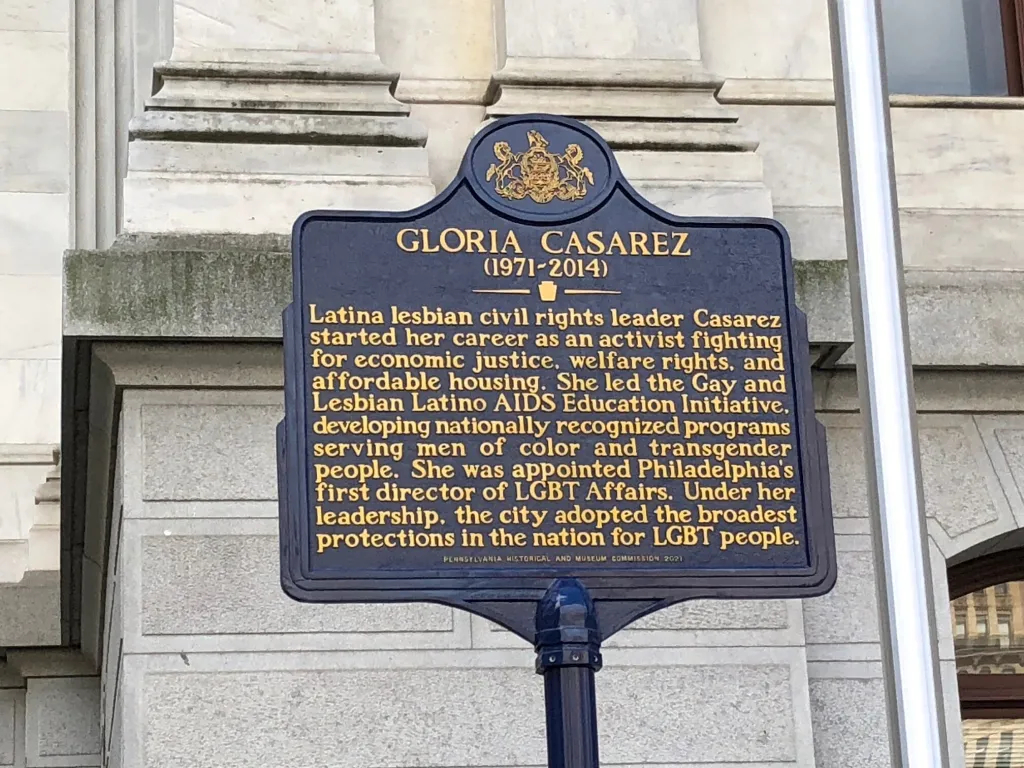 Philadelphia, PA – The installation of three LGBTQ+ historical markers in Philadelphia will make the City of Brotherly Love home to the most such markers in the world. The three markers honor Alain Locke, “Father of the Harlem Renaissance” writer, professor and philosopher; Gloria Casarez, Latinx and LGBTQ civil rights leader and the first director of Philly’s Office of LGBT Affairs; and the Philadelphia Gay News (PGN). Locke’s marker was installed Oct. 3, Casarez’s on Oct. 8, and PGN’s will be installed on Oct. 13. Two more markers commemorating LGBTQ activists and allies will be installed in Harrisburg on Oct. 10. One will honor Gov. Milton J. Shapp for enacting policies that protected the rights of queer Pennsylvanians, while the other will celebrate Richard Schlegel, a gay activist who was fired from his government job in the 1960s because of his sexual orientation.

The marker honoring PGN will be unveiled on Oct. 13 at 233 S. 13th Street in the Gayborhood, the newspaper’s first office. The marker praises PGN for being one of the most awarded weekly newspapers in the U.S., for its cutting-edge reporting on the HIV/AIDS epidemic, and for raising awareness of LGBTQ rights and marriage equality. “When PGN [initially] started in 1975 at this address, we had no plumbing; one night the neighbors broke in and literally tore out all our electric,” PGN Founder Mark Segal said in a statement. “From that time of intolerance, to Philadelphia becoming one of the most LGBTQ friendly in the country, this plaque states our part in that fight for equality. It’s humbling, and something we could not even imagine in 1975.”

Locke’s marker was installed October 3 outside of the African American Museum of Philadelphia (AAMP) in partnership with Equality Forum, an organization that helms LGBTQ History Month events, produces documentaries, leads initiatives and hosts the largest yearly national and international LGBT civil rights summit. The current Locke marker was replaced from its previous location outside of Locke’s childhood home in South Philadelphia. Locke was a Black gay man who was best known for being the first African American Rhodes Scholar, for his work as a professor at Howard University, and for creating the philosophical concept “New Negro,” collaborative writings that precipitated the Harlem Renaissance.

Malcolm Lazin, executive director of Equality Forum, pointed out Locke’s impact on society, having been born just 20 years after the American Civil War ended. “[Locke] really in a difficult moment made a mark and laid the foundation for the movement for Black equality,” Lazin said. “There are a lot of similarities between the African American civil rights movement and the LGBTQ civil rights movement where we were both so marginalized that our histories and important contributions really were invisible.” The marker celebrating Gloria Casarez was installed on October 8 at City Hall, making it the first historical marker in Pennsylvania to honor a Latinx subject. The rainbow Pride flag was also raised during the ceremony to mark LGBTQ History Month, a custom that Casarez initiated when she served as the first executive director of Philadelphia’s Office of LGBT Affairs. (Philadelphia Gay News – Michele Zipken at https://epgn.com/2021/10/08/pgn-lgbtq-activists-and-allies-honored-with-historical-markers/)