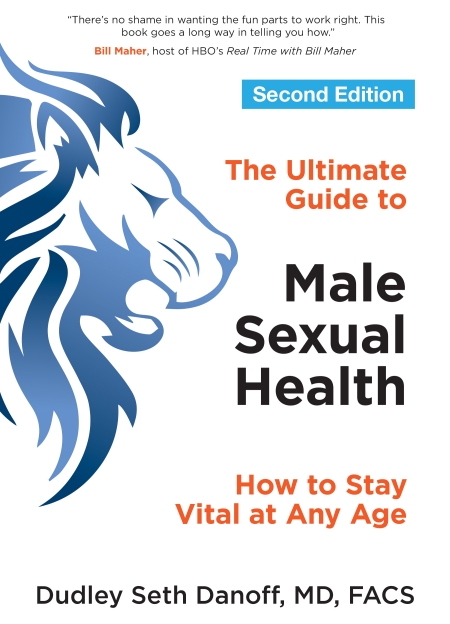 As a practicing urologist, as well as the author of The Ultimate Guide to Male Sexual Health: How to Stay Vital at Any Age (second edition), my professional activities have centered around the diagnosis and treatment of urologic cancers. I’ve been a longtime supporter of the LGBTQ community, and during my 30-year practice, it has been my clinical observation that the basic psychological, physiological, emotional, and physical aspects of sexuality are blind to gender identity and sexual orientation. Although my book mainly addresses male sexuality and the penis, my hope is that it will help all readers “with a penis in their lives.”

The seed for my book was planted in 1993 when a patient suggested that I write a popular book about male sexual health. Then he held up a three-by-five card with his recommended title: “Penis Power.” This was years before the ubiquitousness of the Internet, before Howard Stern, and before Viagra.

At that time, to have the word “penis” on the cover of a mainstream men’s health book was taboo. I explained to the publisher that the word “penis” accurately describes a body part, and that word is to the urologist what the word “heart” is to the cardiologist. However, my shouts of “Get over it!” were to no avail. The fact that so many people snicker or feel uncomfortable when they read or hear the word “penis” was just one more reason I felt I had to write this book.

One of my main goals in writing this book has been to cure what I call “penis weakness,” a condition that is plaguing men at an alarming rate and is compounded by their lack of knowledge of exactly what’s going on in their bodies – and their brains. Unfortunately, many men who suffer from the anxiety and self-doubt caused by penis weakness, irrespective of their sexual orientation, do so with very little support from the medical community. My book addresses the malady directly and speaks to men and women, straight couples, gay couples, and everyone in between. Readers will gain the skills and confidence they need to overcome penis weakness by understanding the facts about male genital health and sexual potency.

With the commercial success of major pharmaceutical drugs designed to “cure” erectile dysfunction, some of the significant issues of male sexual health have become part of our social consciousness. Yet many men and their partners are still depriving themselves of the complete sexual satisfaction and enjoyment they deserve. Insecurity and uncertainty about sexual performance remain key problems for many of my patients.

My goal is to help every man not only learn the penis’s biologic functions but understand that the penis is much more than the condition of its blood vessels and nerves – it is an organ of expression. A man’s penis is what he thinks it is!

Although this book is about male sexuality and male physiology, it speaks to both male and female readers. The principles presented can be used by all men and their wives, husbands, girlfriends, boyfriends, and partners. I want readers to become penis experts – to know how the male genital system works, how and why it does not work on occasion, and how to get it to work again for as long as possible.

A lot of information in the book will surprise you. Some of it may shock or outrage you. I firmly stand behind my observations with one purpose only: to end the plague of penis weakness and the associated frustration and despair that prevent men and women from achieving the sexual happiness they deserve. Often, a simple shift in attitude and an adjustment in behavior patterns can give us the strength and confidence we need to achieve happiness in our sex life and ultimately in every aspect of who we are as human beings.

Dudley S. Danoff, MD, FACS, is the attending urologic surgeon and founder/president of the Cedars-Sinai Medical Center Tower Urology Group in Los Angeles, California. He is the author of The Ultimate Guide to Male Sexual Health: How to Stay Vital at Any Age.