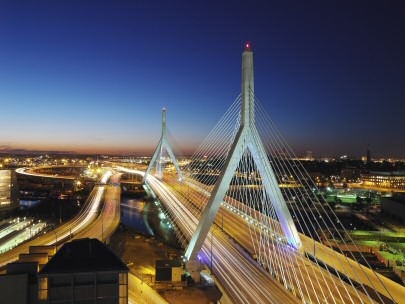 Growing up in New York City, Boston was always an arch nemesis, especially when it came to sports. Yankees vs. Red Sox, Jets vs. Patriots – the rivalries are endless. So it should come as no surprise that it took me 33 years to visit the great city. And yes, I just showed my age!

Boston is a city steeped in culture and tradition, even more so than New York. Yea, I said it! Known for its legendary battlegrounds, Boston is also home to some of the most iconic figures in American history. Benjamin Franklin, John Adams, and Elizabeth Poole all called Boston home. Architectural highlights are everywhere you look, from the Massachusetts Statehouse to St. Paul’s Church to Paul Revere’s home. Boston is a history junkie’s paradise.

One of the best ways to experience the city is aboard the Boston Duck Tour. The land and river excursion will show you the major highlights on land including the golden-domed State House, Bunker Hill, TD Banknorth Garden, Boston Common, and Copley Square before seamlessly turning into a boat and talking passengers on an adventure along the Charles River.

Boston’s culinary scene is an experience in itself. Two destinations unique to the city include the North End (Little Italy) and Chinatown. Foodies will be delighted by the array of authentic restaurants in both areas of the city. I suggest spending the afternoon admiring the Chinatown Gate and enjoying dim sum at one of dozens of eateries in the neighborhood.

Boston is also home to a realm of high-end establishments, most notably The Palm. Start off your meal with an order of Bacon Wrapped Scallops or Sesame Seared Ahi Tuna with seaweed salad, pickled ginger, wasabi, and soy vinaigrette. The fish is extremely fresh thanks to Boston’s seaside locale. Follow up your appetizer with the Beefsteak Tomato Capri salad prepared with sliced tomatoes, basil and imported mozzarella di bufala.

Entrees are limitless at the Palm. Even though beef reigns supreme, I recommend the Signature Palm Surf ‘n’ Turf. Guests can add a half lobster to their choice of any USDA Prime corn-fed beef selection on the menu. If you saved room for dessert, go for the Bag of Warm Doughnuts dusted with cinnamon sugar and served with chocolate and raspberry sauce. After a long day exploring the city, you deserve it!

Hotel choices are abundant. Two properties I recommend are the Liberty Hotel and Nine Zero. The Liberty is one of the most unique properties that I’ve ever stayed in. Once home to the legendary Charles Street Jail, the hotel now boasts 300 guest rooms, a 24-hour fitness center, and business center. Do Not Disturb signs are actually replicas of cell keys. I took one as a souvenir. Don’t tell anybody!

On the complete opposite end of the spectrum, Nine Zero is a swanky boutique hotel, which offers signature Kimpton Hotel hospitality and acclaimed style in the heart of downtown Boston. The property is centrally located across from Boston Common, steps from Beacon Hill and surrounded by the city’s top theaters, restaurants, and shops. The views from any of their corner rooms are absolutely breathtaking so be sure to request one if available. Internet access is complimentary, which means more money to enjoy the nightlife.

Boston offers a plethora of LGBT bars and clubs. From The Alley to Fritz Lounge to dBar the choices are almost endless and there are nightspots for every taste and budget.

Overall Boston is a wonderful city that deserves four or five days to really experience everything she has to offer. I’m definitely not waiting another 33 years to visit again.