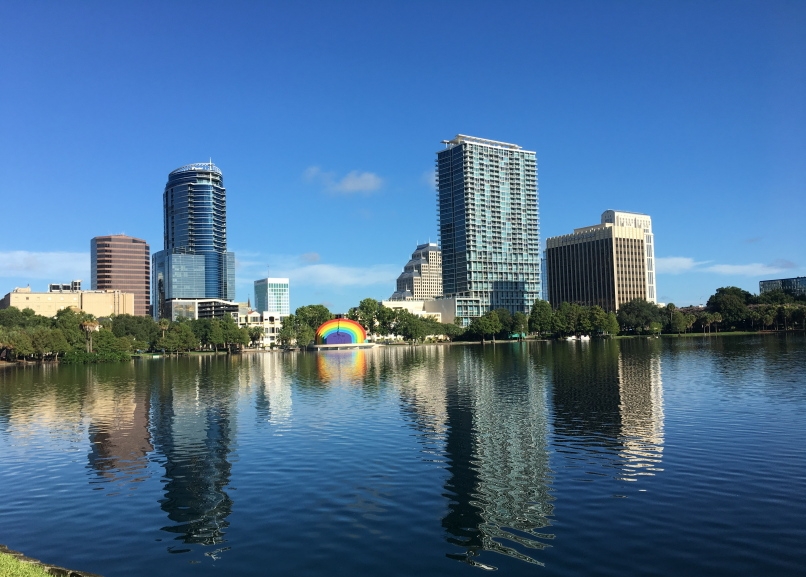 From 1828 to 1987, the Baltimore and Ohio railroad, commonly referred to as the B&O, was the first common carrier railroad. Today, “B&O” should mean the Baltimore-to-Orlando flight path. With several daily roundtrip flights, the convenience of sun and fun is only a couple hours away from Charm City. JetBlue, Southwest, and Spirit airlines often offer specials, as low as $140 round-trip. Orlando is nicknamed “The City Beautiful” and its symbol is the fountain at Lake Eola. It is known for its theme parks – which attracted 68 million visitors in 2016. It is also known for being very friendly to the LGBT community, offering several LGBT nightclubs and social events. But as we all remember, it’s not always sunny in Orlando.

Central Florida’s theme parks are its magnet that attracts people to the area. The gigantic Walt Disney World, located 21 miles south of downtown Orlando, is a major attraction. It is also LGBT-friendly, offering “Disney Gay Days” around the first weekend in June. Closer to downtown Orlando is the Universal Orlando Resort and Universal Studios, a theme park filled with rides and shows. One of Universal Studio’s most popular events is Halloween Horror Nights, mixing scary characters with rides. Sea World, located in the same area as Universal Studios, has dolphin shows and a roller coaster that offers riders the opportunity to wear virtual-reality headgear. The area also offers other attractions, such as Gatorland, Safari Wilderness Ranch, Giraffe Ranch, the Escape Game Room, Sea Life Orlando Aquarium, Coca-Cola Orlando Eye, and located about an hour away, the famous Kennedy Space Center.

Orlando is also the home to several gay clubs and bars. Parliament House is a large gay bar, club, and hotel complex that offers several shows a week. It is famous for its “Balcony Bingo,” a cruising event that has been around since 1975, the year it opened. It is located on a lake, has 112 rooms, and has several bars within the complex. Located next door is Full Moon at Woodstock, a laid back bar with a great vibe. Southern Nights Orlando, established in 1982, is a great place to meet people and to just enjoy the night. A few years ago, Southern Nights Orlando branched out and opened Southern Nights Tampa. Stonewall Bar is a friendly neighborhood bar that is located next to the Orlando City Stadium. Stonewall is a great place to relax before or after a soccer game or to watch a popular game on one of its many televisions. Savoy is an upscale bar and has some of the friendliest bartenders: the drinks are strong and the atmosphere is great. Hanks is another friendly place that has pool tables, a jukebox, and a large private patio. Barcodes Orlando is a bear bar that is easygoing and it has pool tables, video games and theme events, including underwear nights. There are several other LGBT and LGBT – friendly bars and restaurants in the Orlando area.

Although Orlando is a great city with great people, its name is seared in our memories. The weekend of June 10th to 12th, 2016, saw a trio of shocking Orlando events: the Pulse massacre, which is the deadliest mass shooting in US history and the deadliest against the LGBT community. As well over those days, a two-year-old boy was snatched by an alligator at Disney and a famous singer was slain.

The annals of Orlando crime include, in 2011, the trial of Casey Marie Anthony. She was charged with first-degree murder in the death of Caylee Marie Anthony, her two-year-old daughter. Time magazine described it as “the social media trial of the century.” On July 5th, 2011, the jury found Casey not guilty of first-degree murder and other major charges, but guilty of four misdemeanor counts of providing false information to a law enforcement officer.

Then there was the 1984 Orlando courthouse massacre, when Thomas Provenzano, then 34, smuggled weapons into court and opened fire.  Orlando in 1980 saw in the old Orange County Courthouse the trial of Ted Bundy, the serial killer, in which prosecutors presented evidence and described in detail some of Bundy’s horrifying and shocking murders.

And the list of dreadful stories can go on. But most major cities have their histories of sordid crime, and Orlando is no exception.

A great resource to learn about upcoming Orlando LGBT events is the LGBT Center of Central Florida (407-228-8272 or info@thecenterorlando.org)