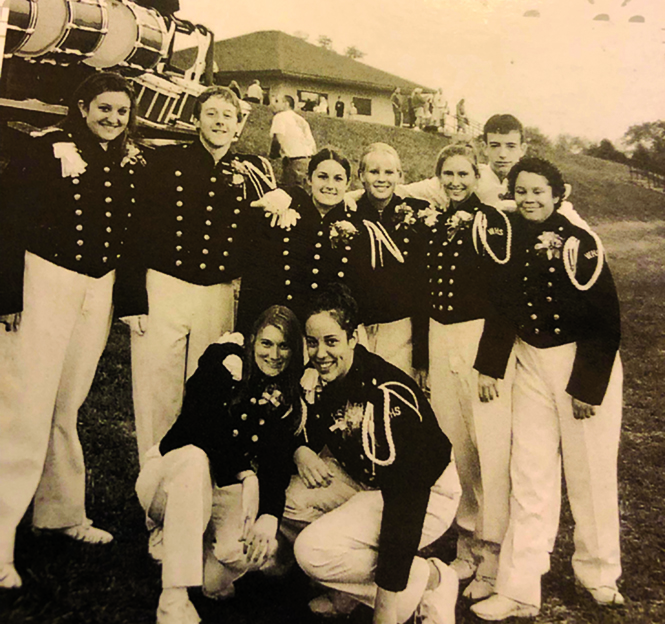 The early 2000s. A mixed bag of gender identity / sexual orientation / hobbies left teenage me scrambling to find more than a couple people who understood me in anything more than simplistic terms. I was able to cultivate a handful of friendships that withstood the volatile mess that most of my 20s were, and while grateful to have those people still in my life, the more removed I am from my teenage years, the more I feel a physical wall between my present and my past

My reality is one where the person who lives in my old yearbooks doesn’t exist. She is gone. She has been replaced by a man, who although he feels vastly more fulfilled, whole, happy, and healthy, also feels like he has no childhood. Here is a fun situation: you’re out in public and everyone is telling the “When I was in high school” stories. You can either 1) tell one and immediately be disclosing that you are trans in public mixed company, or 2) remain quiet. I don’t like remaining quiet. If you are involved in a conversation and suddenly you stop, people tend to think that either they have offended you in some way or you are rude. I am neither, most of the time.

I have lots of coming-of-age high school stories to share. Like the time my friends and I took a video camera and decided to film a music video before we wrote the song. Or the time my best friend and I sat in a tree and read On the Road while we smoked the cigarettes she stole from her mom. Or one of a dozen “One time at band camp” yarns. None are any more significant than anyone else’s adolescent adventures, and some of them were not the most responsible choices, but they helped shape who Asher has become. And simply because they happened with Amanda, I feel like they’re separated by far more than testosterone and time.

It’s not just sharing my past with my present that I feel disconnected from, it’s also the people I shared that past with. Many of my former peers have just now in the past couple years resurfaced on social media, and while I would love to reconnect with them, since just enough time has passed to separate us all from our adolescent cliques, I cannot. I grew up in the marooned western side of Maryland, and I wish less of them had MAGA logos on the visible parts of their profiles, but they do, and I sit here disconnected. My ten-year reunion was in 2015, the summer after I first came out as Asher. I was not on HRT. I think I picked up an extra shift, so I didn’t feel obligated to hobnob.

Since becoming Asher, I have friended exactly one person I went to school with, and that took about a week of telling myself, if she doesn’t recognize you that is a lot better than her being disgusted by you. Her approval did not calm my nerves, it only made the want to reconnect stronger than it ever has been. I am wise enough to know that some of the people who made my adolescence difficult will never change, but for many other, being a jerk teenager is part of becoming a decent adult. While I feel I always tried to be civil with my peers, rose glasses and teenage emotion make for an unreliable narrative.

The rest of my life is an impossible-to-know adventure, but my past remains steadfast. I cannot deny that coming of age in the same area at the same time shapes part of us forever. To be able to grow those roots would not only anchor me to my past but also give me a stronger foundation to ensure my future is as bright as the sky above us.