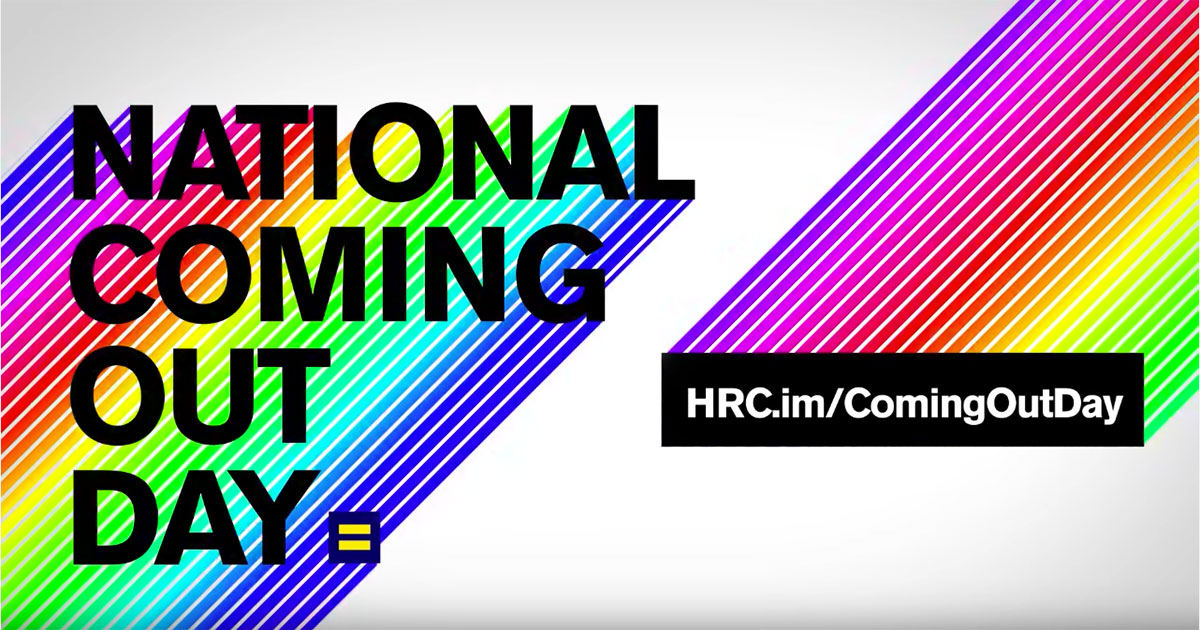 October is an important month for LGBTQ people. National LGBT History Month gives us a wonderful opportunity to reflect on the evolution of our equality movement. It’s also National Bullying Prevention Month — in fact, we celebrate Spirit Day on October 15th to increase awareness of the damage done to LGBTQ youth through bullying. One of our most beloved LGBTQ holidays across the year is celebrated on October 11th: National Coming Out Day.

When National Coming Out Day (NCOD) was established back in 1988, there were very few well-known LGBTQ Americans. Secrecy was considered an essential protection for many, and yet there was a strong political push to bring LGBTQ identities out of “the closet”. Movement leaders were wise to understand that what turns the tide on anti-LGBTQ stigma (and subsequently, policies) is when average citizens come to understand that they already know and love many LGBTQ people. The gap between shameful repression and proud strength, it seemed, was only as thick as the closet door.

Through many years of celebrating NCOD, Keith Haring’s wonderful artwork showed a bold figure joyfully walking through that door. Still, those of us old enough to remember those early days, especially prior to the 1987 March on Washington, can still recall when asserting one’s sexual orientation or gender identity was an act shrouded in secrecy and code, always a balance between maintaining privacy (safety) and connecting with community. Before it felt safe for many of us to be open as individuals, slogans like “We Are Everywhere,” businesses with a pink triangle or a little rainbow in the window, and “Safe Space” stickers on college professors’ doors helped many of us feel less alone.

We still need Spirit Day, 33 years later, because there is still bullying and violence. In 2020, however, it is difficult to find an American who does not know at least one LGBTQ individual personally. Once the snowball of famous representatives started rolling in the early 90s, the extreme stigma around sexual orientation and gender identity that kept us hidden began to shift. Many LGBTQ people still face a rocky road to self, family, and community acceptance, but the pressure to be silent about who we are is different now. As a community of identity, LGBTQ people are OUT.

It is easy to wonder if NCOD is still relevant in 2020. “Coming out,” at its core, is being authentic to who we are. Remember the first time you were at a meeting or event and someone “came out” an ally? They were saying, I’m not an LGBTQ person, yet I’m an ally to your community. I am standing with you in your struggle for dignity and justice.

This October, let’s find our moments to come out as allies. As we consider how to use our voices and demonstrate our allyship, let’s remember the courage and diligence of the late Justice Ruth Bader Ginsburg, a great hero of the fight for equity. Justice Ginsburg frequently used her role on the Supreme Court to shape the law in favor of women, LGBTQ people, and other vulnerable and oppressed people with a simple two-word statement: “I Dissent.”

With the recent passing of Congressman John Lewis, the torch of justice has been passed to those who would fight to make our America a “More Perfect Union”. Lewis’ “good trouble” and Ginsburg’s dissent are two golden examples of public servants using their roles to interrupt oppression. RBG’s humble words are our call to action to be strong and vocal allies.

“[I would like to be remembered as] someone who used whatever talent she had to do her work to the very best of her ability. And to help repair tears in her society, to make things a little better through the use of whatever ability she has.”

We invite you to step up to the challenge of National Coming Out Day at a new level this year. Come Out and speak with your authentic voice about what you believe is right and just. Plug into the national conversation about our leaders, our laws, and our culture. Vote your conscience. Find ways to support equity, fairness, and safety for those who are most vulnerable. Stay proud and stay loud. We know the authentic heart of our LGBTQ communities can make a difference, and we must.