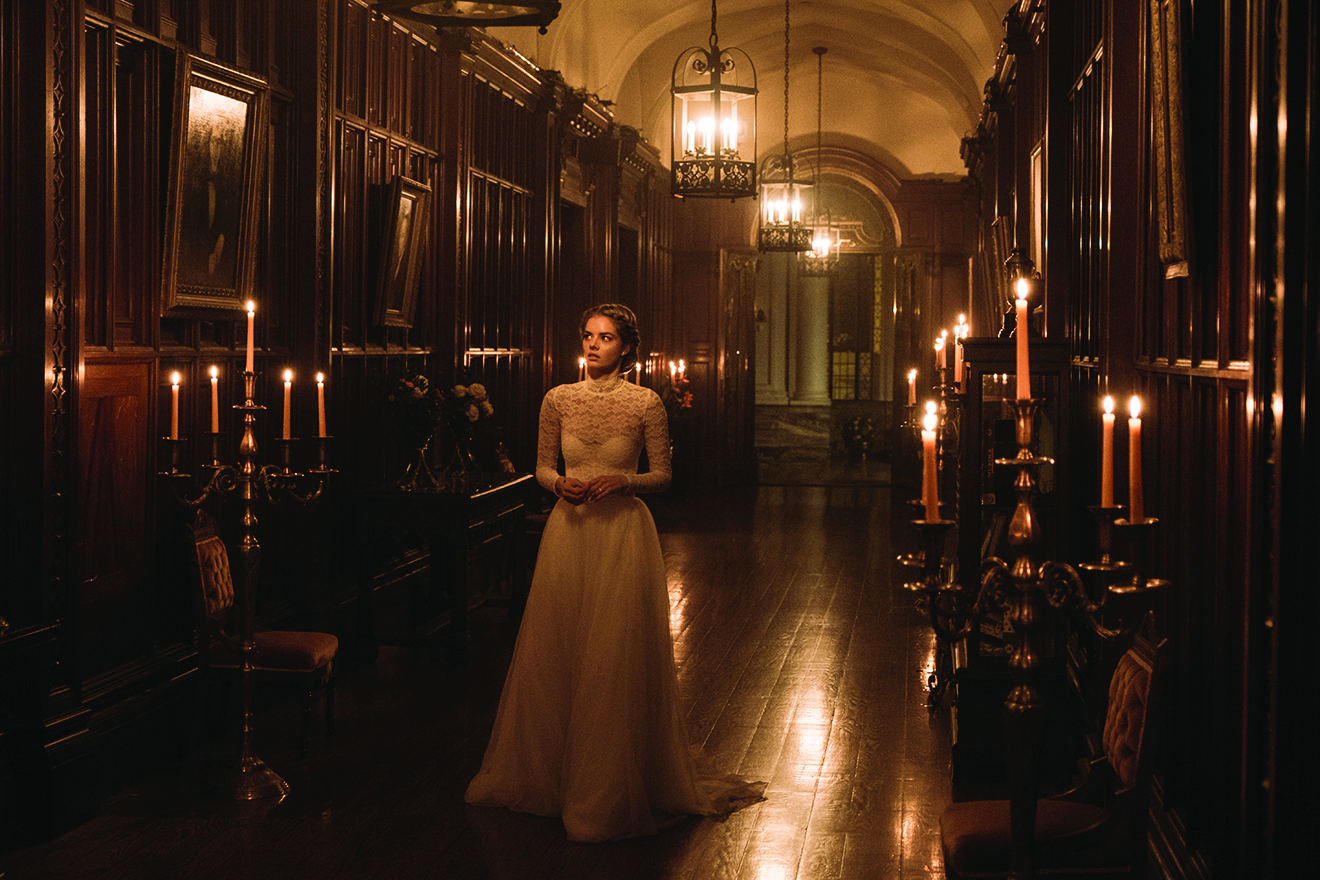 Universal Pictures pulled its thriller The Hunt from release due to recent tragic events, so it’s a bit surprising that Fox Searchlight is moving ahead with its release of the thriller Ready or Not. I suppose that since the action is confined to one location and a single family, it’s not going to be as upsetting as The Hunt (which is basically just a remake of the 1930s thriller The Most Dangerous Game).

Ready or Not has a very simple, yet effective, premise. A young couple, Grace (Samara Weaving) and Alex (Mark O’Brien), are getting married. Alex is part of the Le Domas board game dynasty (or dominion as the family likes to call it), a company built into a huge success after great-grandfather Le Domas made a deal with a gentleman named Mr. Bail. In the family game room, many of the games feature the name Mr. Bail and the family always talks about how they owe their good fortune to him. But Alex is prepared to give Grace an out before the wedding, which she politely refuses. And for once, his mother Becky actually approves of his choice of a bride because brother Daniel’s wife is nothing but a gold-digger who obviously only married into the family for its fortune. Sister Emilie’s husband isn’t much better, but there’s something different about Grace, something pure and innocent.

After the wedding, Grace is then told that at midnight they must play a game, a sort of tradition with all newcomers into the family. Not the way she planned to spend her wedding night, but okay. Father Tony relates the tale of how the family’s fortune came courtesy of Mr. Bail and this tradition is carried out to welcome the newcomer. All Grace has to do is draw a card from a mysterious box. The card is blank when Tony inserts it with the suggestion that Mr. Bail is the one who chooses the game. It could be chess, it could be Old Maid. It could be anything, and when Grace draws the card, it’s Hide and Seek. Everyone’s faces go ashen as it’s the one game no one wants to play. Why? Because Grace has to hide … and then the family members are armed with various bizarre and antique weapons to incapacitate her. She needs to be alive for the ritual, and if said ritual isn’t conducted before dawn, the entire Le Domas family will die. Or is that just a silly myth? They’re not sure because they’ve only had to play Hide & Seek once before and Aunt Helene’s new husband was sacrificed. Now Grace has to evade the family – and Alex is handcuffed to a bed because he’s obviously in love with her and does not want to play – and try to survive the night by any means possible.

I really did not know what to expect from Ready or Not. I know I did not expect it to be a black comedy. Yes, there are thrills and blood and gore – and a running gag involving young nannies who look like they stepped out of Robert Palmer’s “Addicted to Love” video – but it’s also very funny and scary, sort of like if Clue was mashed up with Scream and Scary Movie. The dialogue is sharp and the performances are on point.

Samara Weaving carries the movie firmly on her shoulders as she’s pursued through the mansion and across the grounds, giving as good as she gets even while sustaining some gruesome injuries. Adam Brody as the maybe/maybe not sympathetic brother is also very good because we never really know where Daniel stands. He doesn’t seem to want to play the game, but at the same time he’s always playing along. It’s a great performance that really keeps us guessing. Andie MacDowell is also very good at playing both sides. Becky compares Grace to herself and when the card is drawn, you can see the pain on her face as she knows what is to come. But once things get going, she’s also the one to kick things into gear when everyone else starts to fall apart. Nicky Guadagni is hilariously over-the-top as Aunt Helene and Melanie Scrofano gets a lot of laughs for her bumbling coke head sister who wants to show her family she can do this … but she can’t. All around, it’s a great cast having a great time.

The film is directed with steady hands by Matt Bettinelli-Olpin and Tyler Gillett, who have directed several shorts together as well as a segment in the original VHS anthology. Individually, Bettinelli-Olpin’s other feature is 2014’s Devil’s Due while Gillett has a segment in Southbound under his belt (Bettinelli-Olpin also directed a segment in that anthology). With only one feature between them prior to this, I’d have to say they did a stellar job here, keeping the movie running smoothly, never letting it flag, always mixing the laughs and horror with the hand of an expert. Of course none of that would have been possible without the excellent screenplay by Guy Busick and Ryan Murphy (no, not that Ryan Murphy) – their first feature. And the production design is sumptuous (we’re still wondering if they constructed a set or found a real mansion somewhere).

Ready or Not is the kind of movie that’s best seen knowing as little about it as possible beyond the basic story so you can enjoy the thrill ride to the end. Our screening audience seemed to have a great time, so I would definitely put this on your “must see” list.