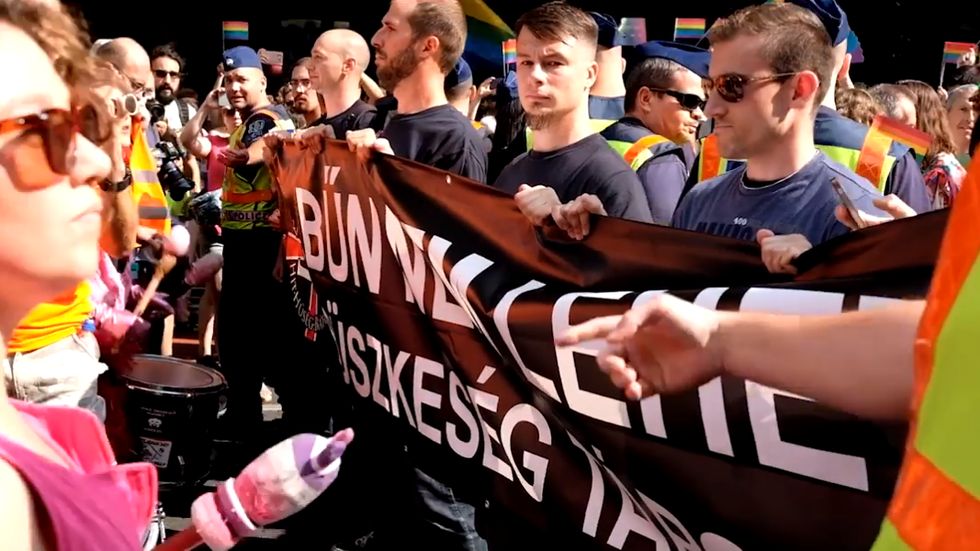 On July 9th, more than 10,000 people attended the 23rd annual Pride event in the Hungarian capital, but they soon found their path blocked by a group of black-clad men holding banners. The men, apparently members of the Betyársereg, or “Army of Outlaws,” is a paramilitary group associated with the far-right political group Sixty-Four Counties Youth Movement. Its name refers to the fact that the pre-World War I Kingdom of Hungary had 64 counties and extended into modern Romania, Slovenia, Croatia, and Serbia. People in the parade peacefully chanted at the men, and riot police deployed between the Pride marchers and the neo-Nazis and removed the neo-Nazi group, accompanied by cheers from the Pride marchers.

In Poland, however, things went much differently. About 1,000 people with rainbow flags and umbrellas marched on the Catholic Jasna Gora shrine in the city of Czestochowa, where the country’s notoriously anti-LGBT prime minister was giving a speech. A few dozen neo-Nazis blocked the route, carrying banners with homophobic messages. They were joined by police, who prevented the LGBT march from going forward. After the march, Poland’s internal affairs minister instructed the police to prosecute the LGBT marchers, accusing them of “desecrating” the White Eagle, Poland’s national symbol, by placing it on a rainbow shield instead of the traditional red one. Government Minister Joachim Brudzinski also charged the LGBT marchers with provoking the neo-Nazis, whom he characterized as innocent pilgrims on their way to the Jasna Gora shrine. t (Seattle Gay News – Mike Andrew at http://www.sgn.org/sgnnews46_28/page11.cfm)