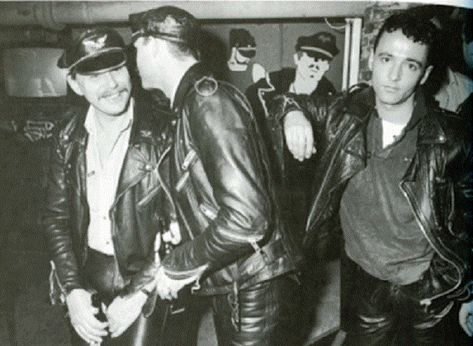 I had another birthday last week. When you get to the age where you have more past than future, you spend lots of time looking back. For me life began in 1984 when I moved to Baltimore and walked into my first leather bar. It was the Gallery One bar at 1735 Maryland Avenue. It was a dress code leather bar in 1984. It is still there and is still a gay bar, but it has changed. The whole leather community has changed.

My first leather bar was a smoky, testosterone-filled world. The Gallery had a popular female bartender, but no female customers. This leather community was a man’s world. In fact the DC Eagle’s motto for many years was: If you’re man enough. I’ve always been proud to report that the Baltimore Eagle had the first Ms. Eagle titleholder in 1992. (The DC Eagle sashed the first Ms. DC Eagle in 2018.) I’ve never been uncomfortable seeing leather woman at leather events. In fact, I’ve am very proud to call many of the great woman in our leather community my friends. When I posted a picture of the Mr. and Ms. DC Eagle Contest on my Facebook page in November one of my friends commented, “I can do without the women.” Maybe he can do without the woman, but the leather community can’t. They are stepping up and keeping the leather community going.

The leather community that I discovered many years ago was not only all male, for the most part is was also all white. The only person of color I recall seeing at the Gallery in those days was Mr. Maryland Leather 1993 Tony Hash. Yes, the third Mr. Maryland Leather title went to a very charming African-American man. He was the first leather titleholder I ever met. He is no longer with us, but he was a real pioneer. In 1995 a leather club was formed to serve as a bridge between men of color and the greater leather community. The club is called ONYX and today has nine chapters across the country and with countless leather titleholders as members and extremely popular fundraisers, including big events at both International Mr. Leather Weekend and Mid-Atlantic Leather Weekend, is a force to be reckoned with. Their members also know the true meaning of brotherhood. I have never felt unwelcomed at one of their parties or events.

I also recently wrote an article about the ever-growing leather puppy community. When I posted a link to that column on Facebook another friend commented, “I guess we have to embrace all the kinks now!” You know what? You don’t have to embrace them, you don’t have to do them, you don’t even have to like them – but you damn well better respect them. The modern leather community has embraced all kinds of fetishes. In my 1984 leather bar there were two types of dress: black leather and wrong. You could conform to the uniform of black leather – jackets, vests, jeans, chaps, etc. – or you could just be wrong. Now at leather events you see not only leather in every color, but also rubber, spandex, sports gear, uniforms, and even fur. I’ve always applauded the Centaur MC for their advertising campaign for Mid-Atlantic Leather Weekend 2008. It featured a picture of a shirtless Mr. Mid-Atlantic Leather 2007 Gary Samuels in shoulder pads and football pants with the tag line “Get in gear!” MAL attracts lots of young people who simply cannot afford $300 leather pants and $200 leather shirts. (I’ve often used my favorite Dolly Parton quote: “It cost a lot of money to look this cheap!”) Young people have embraced the spandex wrestling singlets, jogging shorts with harnesses, and all kinds of gear that would have gotten them tossed out of the Gallery in 1984. It is no longer wrong.

I have recently witnessed an even bigger wave of acceptance. It seems that 2019 is the year of gender non-conforming leather titles that are open to any person in the leather community regardless of sex or gender expression. Our area recently sashed MX Virginia Leather and Northeast Person of Leather. Again, there are going to be those who call it PC bullshit, I call it making a place for everyone at the table. The leather community has always been about brotherhood, now it is finally about family.

As I navigated my way through the leather community in the past 35 years, I have learned a lot. Many years ago, I learned that the leather community had a credo: Safe, sane, and consensual. There has been lots of discussion regarding consent in our community lately. I have even seen a poster at an event that stated: Wearing gear does not constitute consent. For example, just because a man is wearing a jockstrap that is not an open invitation to grab his ass. No one thought about those things in 1984. It is a new world. As I stated in my last article, in this world of social media postings consent even extends to taking and posting pictures at leather events on Facebook and such. It is clear some people still do not grasp this concept. I recently saw a video of the jockstrap pool party at Bears, Bikers & Mayhem on Facebook. It was a scan of the whole pool area filled with people in jocks. Did the person who posted it have the consent of all the people in the video? I hope everyone in that video still has a job today. Maybe those putting on events should post signs. Consent extends to taking pictures. Yes, I have seen many changes in the leather community, and it continues to evolve. I must say that I am pleased with these changes. There is one change that I do not want to see. It involves two of my least favorite words. (No, not “last call.”) I’m talking about “family-friendly.” The leather community was never meant to be mainstream. I cringe when I see articles with titles like “Area Mother Horrified by San Francisco’s Folsom Street Fair.” It is wonderful that leather events now embrace everyone- but let’s keep it 18 and over. We do not need to conform to please the Christian right or the soccer moms. Take your children to see water parks not water sports! The leather community does not have to be that politically correct